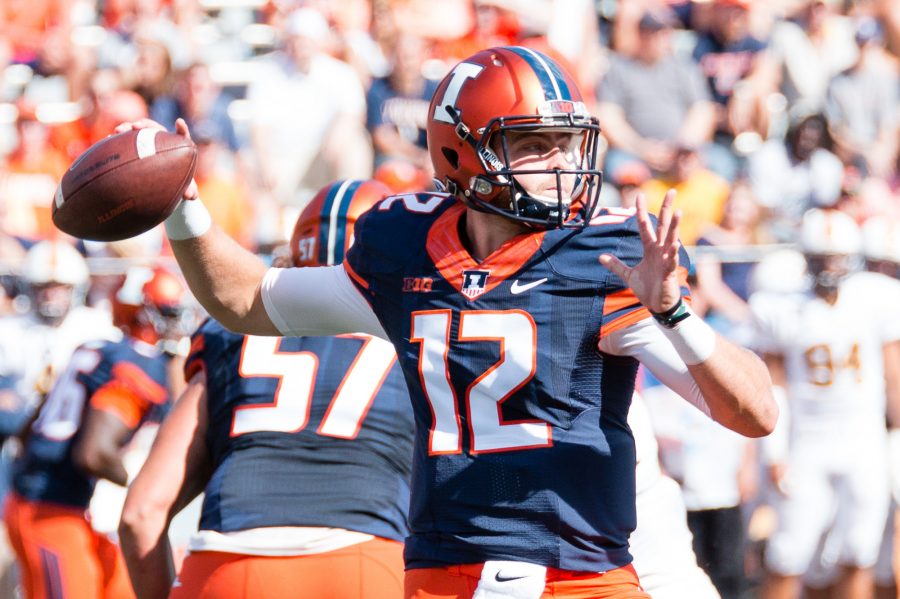 Illinois quarterback Wes Lunt (12) looks to pass the ball during the game against Murray State at Memorial Stadium on Saturday, September 3. The Illini won 52-3.

The what ifs were spreading around and there was a feeling that this program could win.

Well, since I couldn’t go to the game, I ended up at a bar that Saturday, a typical college fan with a beer and burger in tow.

As soon as the game started, all I wanted to do was turn it off and drink more.

This year, the Illini can not afford to have a repeat of the 48-14 blowout in Chapel Hill, North Carolina.

But this year, it’s warranted.

Do I think Illinois will blow out North Carolina Saturday night like they did to Murray State?

Something very strange would be happening if they did.

Do I think they’ll win?

Realistically, probably not, but it’s Illinois football, so I’ve learned to expect the unexpected as evidenced by Lovie’s hiring last March.

However, this is the program’s chance to determine the tone for the rest of the season.

In his Monday press conference, Lovie Smith said the largest improvements in a team are seen from Week One to Week Two.

Those improvements will need to be seen this week if the Illini are expecting to make a statement on the field this season.

While Smith has definitely changed the program’s perception and will continue to do so as the years go on, Saturday’s game is about the now.

It’s a primetime matchup that will likely draw the most fans at Memorial Stadium in a few years; and just as everyone and their mom has been saying, there’s no reason not to go.

The atmosphere is going to finally be like that of other Big Ten schools with a full crowd and there’s a full day of tailgating preceding the main event.

More importantly, this is Illinois’ chance to prove that it is finally a Big Ten threat and can compete.

That requires showing fans that they’re a team who can compete against squads that are playing SEC, top-25 teams and staying in the game.

A loss against North Carolina is fine, as long as it’s a competitive game.

The Illini cannot allow two 70-plus returns, with one resulting in a touchdown.

The line can’t let running back Elijah Hood break free or really get a hold of the ball. He was a major threat in last year’s matchup, rushing for 129 yards and a touchdown. If the Illinois defense can stop the connection occurring between Hood and quarterback Mitch Trubisky, there’s a greater chance of keeping the score close.

From an offensive standpoint, Illiniois quarterback Wes Lunt has to exhibit senior leadership and remain calm in the pocket.

Look for running back Ke’Shawn Vaughn to take charge this week. Running back Kendrick Foster had a breakthrough performance last week, rushing for a career-high 118 yards and two touchdowns.

With the run game successful Saturday in Champaign, North Carolina might feel more pressure to crowd the box, giving Lunt a greater chance to throw.

The important thing for Smith this Saturday is to keep the score close. If he can do that, it’ll at least give fans a fun night and a shot at bowl season.

For now, it’s time to see what improvements Smith can show in his first week back in college ball.