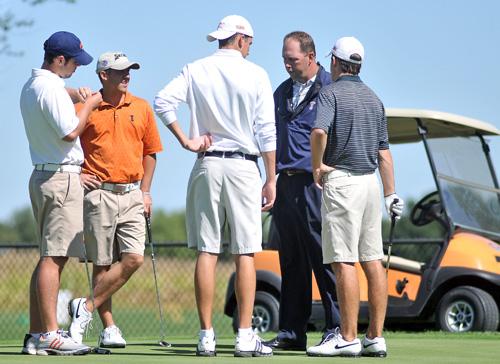 Mens golf coach Mike Small speaks with his team during practice at the University of Illinois Golf Course.

Small received a six-year contract from the University on Thursday, totaling more than $2 million dollars in base salary. The contract runs through the 2021-22 season and will take effect immediately.

Also included in the contract is a $600,000 buyout if Small decides to leave the University for another position, but that is not on the mind of Small, who is beginning his 17th season with the Illini.

“I’m very grateful and excited that Josh (Whitman) and the University have extended my contract to keep me in the Illini family,” Small said in a press release. “I started as an Illini and I intend to finish my career as an Illini. I’m extremely grateful to the administration for showing confidence in me and for recognizing the success that we have achieved so far.”

The men’s golf team’s achievements have been numerous under Small’s leadership, including: two NCAA Individual Champions, 12 NCAA Championship berths, and a record five appearances in the match-play portion of the NCAA Championship.

Small, himself, has made a strong showing by reeling in some hardware over the years. He has been chosen as the Big Ten Coach of the Year eight times, and he was named the 2015 Dave Williams National Coach of the Year.

An overwhelming résumé like Small’s made the decision to extend his contract an easy one for Athletic Director Josh Whitman.

“Quite simply, Mike Small is the finest collegiate golf coach in the country,” Whitman said in the same release. “His record speaks for itself, in the success of his student-athletes both during and after their time at Illinois. He has defied the odds and built the Fighting Illini golf program into one of the nation’s elite. This contract demonstrates our mutual commitment to Mike spending the rest of his career leading the men’s golf program at Illinois.”

Looking to the future, all signs point toward Small’s continued success at Illinois. Juniors Nick Hardy and Dylan Meyer, along with sophomore Edoardo Lipparelli, were recently named as 2016-17 Preseason Honorees in the Big Ten. This trio will lead a young group this year as the Illini will try to win their third straight Big Ten title and eight of the last nine titles.

With a new contract under his belt and a revamped team behind him, Small said he is more than ready for what lies ahead.

“Illinois athletics has been part of family for my entire life, and I treat my time in this position as a lifestyle, not as a job,” Small said. “I am proud of what this program has done over the past 16 years, and I am excited for the future.”