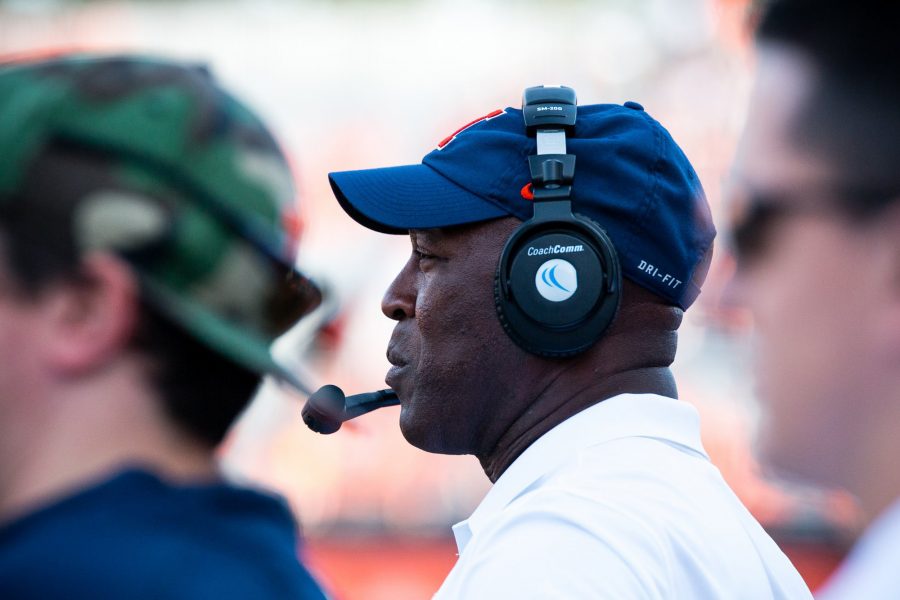 Lovie Smith watches over the players during the game against Murray State on Murray State at Memorial Stadium on Saturday, September 3. The Illini won 52-3.

Even if Illinois and North Carolina don’t match up often, the stakes are usually pretty high when they finally do.

Such was the case in the 2005 NCAA basketball title game when Deron Williams, Dee Brown and company lost a five-point heartbreaker to a North Carolina program that has since continued to be a powerhouse in the ACC.

Fast forward to over a decade later, and the Illinois football team is set to square off against North Carolina in perhaps their most important game since the 2008 Rose Bowl.

“It’s early in the year, but for us, this is a big game,” head coach Lovie Smith said Monday. “I don’t now how North Carolina is looking at the game the way they beat us up last year. But for us, its’ a big game and a true measuring stick to see where we are.”

The Lovie Smith era kicked off with a blowout victory over Murray State in Week One. This Saturday, the Illini will look for their first signature win under their new leader.

The primetime showcase will be the first night game at Memorial Stadium since 2013. Illinois is 14-9 all-time in home night games.

Although Smith said he prefers day games, he’s looking forward to coaching under the lights this weekend.

“Night games are normally prime time games, so you get a chance to show more people what you have as a team,” Smith said. “I know we’re excited about this night game and excited about the gameday atmosphere. We keep talking about having a home field advantage here, and part of that is the whole experience that you have, and it should be a special one this week.”

North Carolina opened its season with a 33-24 home loss to Georgia. The Tar Heels held a 10-point lead in the third quarter, though, and the backfield combo of Elijah Hood and TJ Logan combined for 152 yards and a score on the ground.

“I think you have a little bit of thunder and lightning in those two,” defensive coordinator Hardy Nickerson said. “Hood’s a very good back, a strong runner and breaks a lot of tackles. And (Logan) is just fast. Those guys present problems, but I think we’ll matchup pretty well with them.”

Four of the Tar Heels’ offensive linemen are returning from last season and will hope to contain the Illini’s explosive defensive line, which combined for five of Illinois’ six sacks against Murray State.

The constant pressure from the Illinois D-line forced three Racer turnovers, and the Illini will hope for similar results against the defending ACC Coastal division champs, who went without a turnover in Week One.

“I liked the effort defensively,” Smith said. “We had quite a few plays where we had all 11 guys in the frame and around the ball, which is a good thing. That’s what we’re striving for.”

Much has changed since last season’s 48-14 loss to North Carolina in Chapel Hill. Under the lights and in the national spotlight, Illinois will try to put those changes to good use on Saturday.

“They beat us pretty good last year, but this year we’re looking to be a competitor,” running back Kendrick Foster said. “North Carolina’s a great team. We have to bring our A-game and we know that. It’s gonna be fun.”