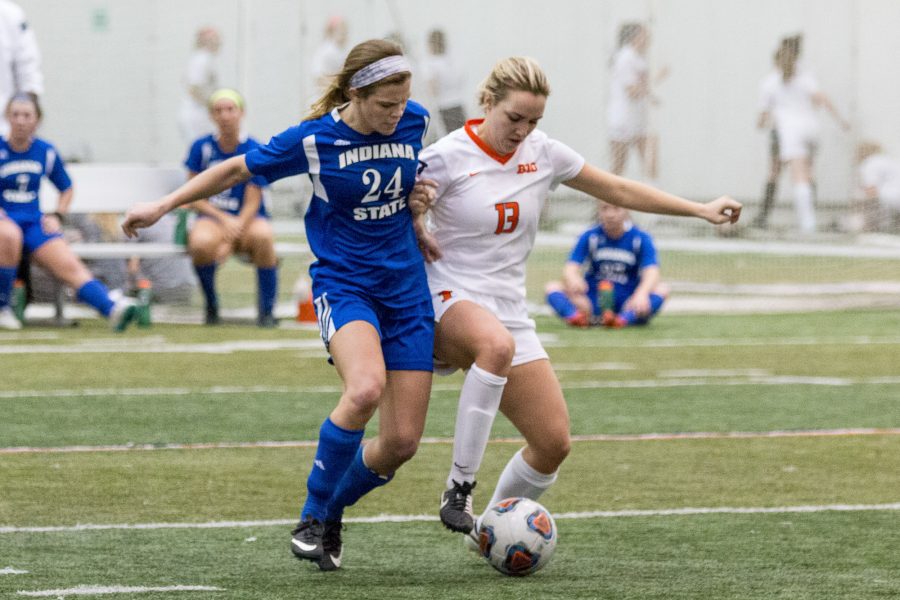 Illinois’ Summer Schafer fights for possession of the ball during the game against Indiana State in the annual 7 vs. 7 tournament at the Irwin Indoor Facility on February 27. The Illini lost this game 8-3.

Key player: Summer Schafer: She put in the game-winner against Evansville and is the team’s first multiple goal scorer

Quote of the game: “It’s great to finally be on that side of the equation” – head coach Janet Rayfield

After a string of tough losses, the Illinois soccer team finally turned offensive pressure into a win against Evansville on Sunday.

The Illini, who lost five straight matches heading into this matchup, beat the Aces 1-0 at the Illinois Soccer Stadium.

“It’s great to finally be on that side of the equation…we’re playing some great soccer,” head coach Janet Rayfield said. “We just have to do more of that, get all of the pieces of the puzzle right. It’s great to get this win.”

Senior midfielder Summer Schafer scored the winning goal for Illinois at the start of the second half by putting in a pass from sophomore Patricia George. It was the first Illini goal in three games.

“We went into halftime, and we really needed to get back on track of getting goals and winning,” Schafer said. “I worked my butt off to get to the end line just to sock the ball into the back of the net.”

Schafer is one of five players to start every game this season and is a part of an experienced group of senior midfielders. The veteran middle line has driven the offense thus far, scoring five of the team’s seven total goals.

Freshman forward Kelly Maday, the 2015 Illinois Gatorade Player of the Year, made her first start for Illinois on Sunday and led the team in shots. She put up two against Evansville, both on goal.

This weekend, the team picked up where it left off, dominating the attack in both of this weekend’s matches.

Illinois outshot Evansville 18-5 and only allowed two shots from the Aces in the second half.

Illinois played a similar strategy in its Friday night game against Miami of Ohio — outshooting its opponent 17-7 — but the result didn’t fall in the team’s favor.

The Illini lost 0-1 to the Redhawks in double overtime. It wasn’t an ideal start to the game for Illinois, as kickoff was delayed due to storms and a lightning delay halted play in the seventh minute.

The team pressured Miami the entire game but couldn’t turn any of those opportunities into goals. Rayfield said that the team still needs to improve on being more lethal in the “soccer red zone” by converting those chances. The Redhawks finally put a goal past goalkeeper Claire Wheatley in the 102nd minute to secure their third victory of the season.

Illinois finished its non-conference play at 3-5-0, its worst record in the last 10 years.

But a clean slate comes later this week when the team begins its conference season against Purdue Thursday night.

“We’ll all start fresh,” Rayfield said. “We’re going to have to do the things we’re doing well just that much better. You always have to kind of amp things up when you get into that Big Ten season.”