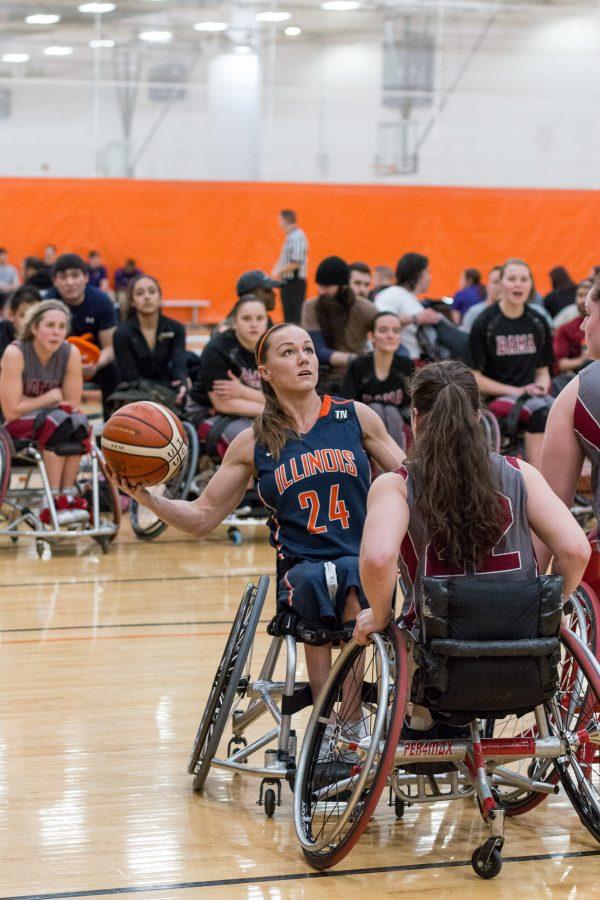 Illinois’ Megan Blunk gets ready to take a shot during the game against Alabama at the Activities and Recreation Center on February 12. The Illini won 56-47.

If you looked at the USA-Netherlands women’s wheelchair basketball game from a “bigs” perspective, the Dutch would have a 3-1 advantage over the Americans.

The Netherlands’ bigs are comprised of Mariska Beijer, Sanne Timmerman and Cher Korver, while the United States has Rose Hollerman.

“When the bigs get in (for Netherlands), there’s not a lot we can do,” said Megan Blunk, a former Illini and current USA women’s wheelchair basketball team member.

On Sunday, in one of the most highly anticipated pool play games in the Rio Paralympics, the United States’ women’s team came away with a 60-50 win against the Netherlands. Hollerman had 17 points and played all 40 minutes.

The Netherlands’ bigs had 32 of the team’s 50 points. Beijer had 30, with 19 of these coming in the second half. The team also hauled in 13 offensive rebounds against the United States’ six.

It looked like the United Sates would pull away with a larger defeat after jumping to a 24-11 lead with 7:32 left in the second quarter.

But the United States’ defense caused several sloppy turnovers, including some three-second violations by Beijer. The team shot 50 percent, while the Netherlands shot 29 percent.

At the 4:28 mark in the quarter, the Americans led 35-27, and the Netherlands was showing good ball movement and tight defense. On one play, the Netherlands’ full-court pressure and double-teaming caused an eight-second half-court violation by the U.S.

At 1:27 in the third quarter, the United States led 37-34 after Beijer scored her 22-point of the game off a shot from under the basket.

The Netherlands defense continued in the fourth quarter by clogging the Unites States’ passing lane and forcing shot-clock violations. As a result, the Netherlands was now down 45-42.

But that was the closest the Netherlands came to overcoming its opponent.