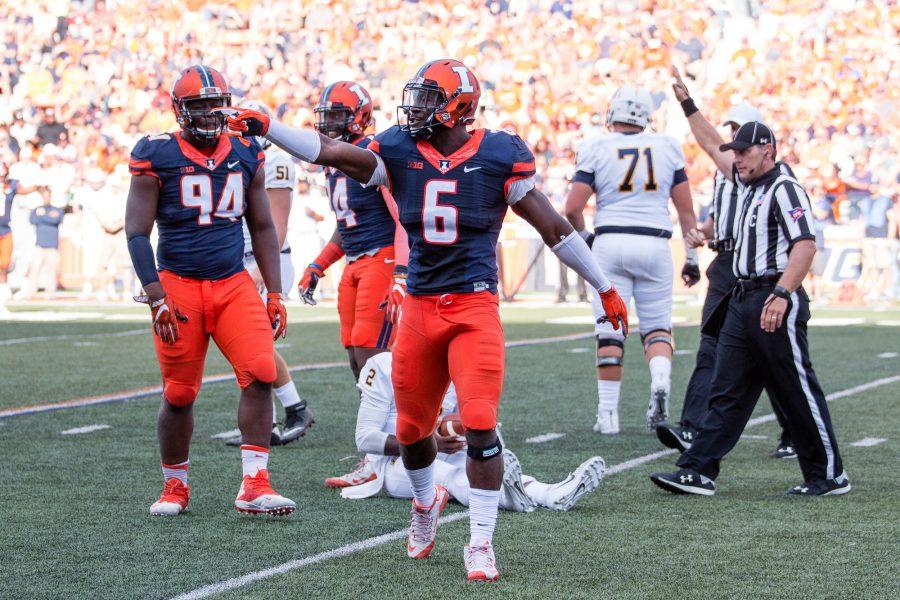 An old photo of Carroll Phillips hangs alongside his helmet, pads and No. 6 jersey. Every time he opens his locker, he sees the picture in which he’s much smaller, much younger and sporting a Scott Lake Park football jersey in his hometown of Miami, Florida.

Phillips has kept more than the same jersey number since childhood. The Illinois’ senior defensive lineman has gone by the same nickname for over a decade: Wild Man.

“Ever since I played little league, guys would be like, ‘Oh that’s Wild Man, No. 6 right there,’” Phillips said. “So I’ve just carried that all the way up until now.”

Phillips has more than lived up to his nickname so far this season. The 24-year-old leads the nation in tackles for loss with 6.5. He topped his previous single-game high for TFLs with three against Murray State and set a new mark a week later with 3.5 against North Carolina. He’s also tallied a sack in each of the first two games.

Overall, the Illini are second in the nation in tackles for loss.

“It’s only two weeks in, but I’m just trying to maintain and trying to stay at the top of that list week in and week out,” Phillips said.

Now in his third year as an Illini, Phillips has endured a long journey to finally earn his spot as a full-time starter on one of the best defensive lines in the country.

Fresh off a state championship with Miami Central in 2010, Phillips signed to play with Cincinnati. He was half a credit short to academically qualify to play, though, and was forced to take the JUCO route in order to continue his football career.

So Phillips packed his bags for Wesson, a town of under 2,000 in Mississippi, to play for Copiah-Lincoln Community College.

The move for Phillips, a self-proclaimed city guy, from Miami to Mississippi was difficult to say the least.

“I had to drive at least 20 minutes just to go get something to eat every day,” Phillips said. “The transition from Miami to Mississippi was a struggle. Once I came here, it was like a big upgrade from Mississippi. I just blended right in.”

After totaling 49 tackles and four sacks in seven games with Copiah-Lincoln in 2013, Phillips committed to Illinois as a two-star recruit, according to 247sports.com.

With one year of eligibility exhausted, Phillips came to Illinois as a sophomore and quickly found himself behind another sophomore on the D-line depth chart: Dawuane Smoot.

While Smoot has become the face of the Illinois defense, Phillips has been content with being the guy on the other side of opposing offensive lines’ double teams.

“I’m so proud of Smoot,” Phillips said. “To see him transition over and be in the spotlight, it’s a blessing for him and it shows me that I can be just as much in the spotlight as he is. But right now, I’m kind of happy I’m not in the spotlight so I can make more plays and keep being under the radar.”

Smoot doesn’t think the attention he’s garnered has anything to do with Phillips’ success, though.

“Everything that’s come his way is because of him,” Smoot said. “He’s always been a great player. I feel like he’s more confident and he’s out there just letting it go and feeling more comfortable on the field.”

Despite their three-year age difference, Phillips and Smoot rose up the ranks in similar fashions and trudged through the same tumultuous path that plagued the Illinois football program over the past few years.

Now, they find themselves on either side of the front line of head coach Lovie Smith’s defense.

Phillips said he could barely believe the news when Smith decided to join the team in March. Since then, the admiration has gone both ways.

“I’ve liked Carroll Phillips since he’s been here,” Smith said. “He’s a guy that can rush, he’s a legitimate outside pass rusher. He can create havoc on the outside. Just being able to maintain that type of play is what were looking for right now.”

Since he’s arrived, Smith’s agenda has included big plays on defense. For extra motivation, a chart detailing every big play made for the season hangs in the defensive meeting room.

Although Phillips has 26 yards worth of TFLs already, he said he still isn’t on the chart and has made it a goal to get his name on that list.

Once he does make the list, Phillips may want to pencil in his nickname instead.