Wes Lunt needs to — and will — be better 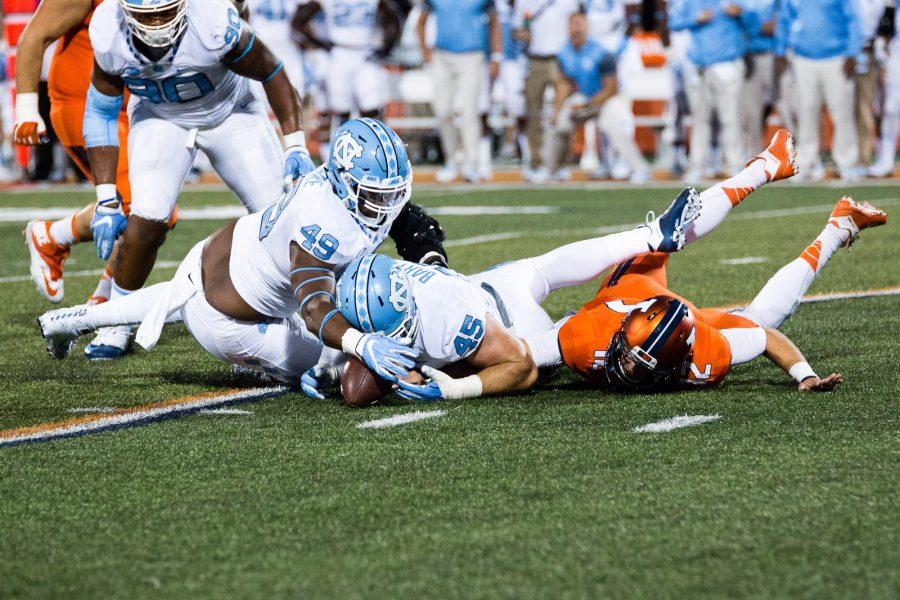 You didn’t need to read this page today to realize that Wes Lunt didn’t play well enough last Saturday for his team to win.

No one knew this more than Lunt himself, who was quick to admit his mistakes after Saturday night’s loss, completely shouldering the blame.

His stats were lackluster; he completed 17 of 35 passes for 127 yards. Don’t forget he dropped the ball leading to a North Carolina touchdown late in the first quarter.

However, the stats don’t tell the entire story. The tape shows more. Lunt looked shaken and unconfident, as was evidenced in a number of throws off of his back foot, play clocks that continued to wind closer to zero and a number of miscues with his receiving corps.

In the post-game, when asked if he was rattled during the game, his response was very telling.

“I don’t know,” he paused for a moment, as he saw the pocket of reporters narrowing in on him. “That’s a good question. I’ll have to watch the film.”

In saying nothing, Wes Lunt told us everything. The answer to that question was simple: yes. Of course he was shaken — it doesn’t take a football genius to tell you that — and he most certainly didn’t need to watch the film to be sure.

He was off. And he wasn’t the only one.

“I think Wes performed the way all of us performed,” Lovie Smith told reporters after the game. “We all have to do better than that. We were just off tonight — Wes and everyone else.”

The offense wasn’t good — thirteen offensive penalties, six fumbles and an inability to find consistency plagued the team throughout the evening. And, since it’s a part of the job description, the quarterback is going to take a lot of the heat for the team’s poor performance.

I realize that it’s early and that it’s a long season, as Lovie Smith and his players mentioned countless times during Monday’s press conference. That being said, this game against Western Michigan is crucial.

In order to head into an early bye week with momentum and help set the tone for the rest of the season, Illinois needs to win this upcoming game. It may sound forward, but this game has major implications on the team’s chance at a bowl game.

If they were to lose to Western Michigan, it would be difficult to imagine a scenario where they the win five Big Ten games needed to earn a bowl bid.

The Illini are going to have to play a lot better to swing a victory, and a lot of it starts with No. 12.

I think he will be better.

“Wes is a competitor. And he’s one of the best guys in the country at wanting to better himself,” center and team captain Joe Spencer said. “Unless everything is going perfectly, Wes won’t be happy.”

And if he doesn’t perform Saturday, fair or unfair, people are really going to start questioning him. It’s time that Wes Lunt plays up to the caliber that everyone says he can.

He needs to show off his big arm, his poise in the pocket, his calmness under pressure.

Will he? That’s yet to be seen.

But, I think we’ll learn a lot about Lunt in this game. There’s a tremendous amount of pressure on him to bounce back after such a poor performance.

More than that, he knows how much this game means to the team’s season.

And don’t overlook this Broncos team either. When the Illini take the field Saturday, barring a massive swing in betting, they’ll be underdogs, according to Vegas.

Does that fact actually matter? No. But it shows that these underdogs have something to prove.

And no one has more to prove than Wes Lunt.

Kevin is a junior in Media.