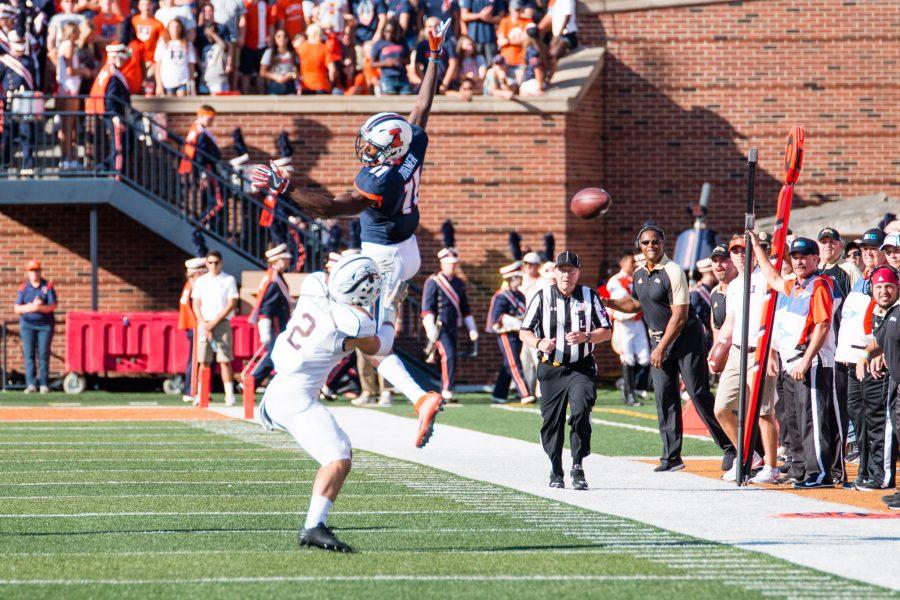 Illinois wide receiver Malik Turner (11) misses a pass during the first half of the game against Western Michigan at Memorial Stadium on Saturday, September 17. The Illini are losing 24-7 at half.

In Week One, Illinois enjoyed a blowout win in Lovie Smith’s coaching debut, while its in-state rival Northwestern fell to Western Michigan in a 22-21 upset.

The Illini suffered the same wrath Saturday afternoon with a 34-10 defeat at the hands of Western Michigan.

Although quarterback Wes Lunt’s performance was miles ahead of his North Carolina outing, the Illini offense was stuck for much of the game. The running game couldn’t find any holes and netted just three total yards, with Ke’Shawn Vaughn’s 22 yards leading the team.

“We put so much time and effort and work in,” Lunt said. “When you get the outcome that we did today, it hurts.”

The Broncos kicked off the scoring in the first quarter with a one-yard rushing touchdown to cap off a 60-yard drive. Corey Davis showed why he’s one of the top receivers in the nation with a 44-yard grab to set up the score.

Smith’s focus since the North Carolina loss has been tidying up the penalties, and it seems the message wasn’t fully taken in by Saturday. The Illinois defense committed multiple errors, including a few off-sides penalties that resulted in Western Michigan first downs.

For the second straight week, things began to spiral when the penalties started piling up. After a roughing the passer call on cornerback Chris James that resulted in 15 yards for the Broncos, running back Jamauri Bogan broke off a 36-yard run for his second score of the day.

Already trailing 14-0, Illinois lost a fumble on its ensuing drive after Lunt took a big hit before he could properly get into his throwing motion. The Broncos took over five yards out of the goal line, and two plays later, Terrell gave his team a three-score lead with his legs.

That early deficit proved to be unsurmountable for the Illini — they managed 108 total yards of offense in the second half.

“We’ve got to score some points, it’s as simple as that,” Smith said. “We say we’re a running football team, and with those types of numbers, you can’t win football games.”

The Illini got its first score of the day in the second quarter. Offensive coordinator Garrick McGee called up a double-reverse flea flicker, and Lunt found tight end Ainslie Johnson down the right side of the field for a 56-yard score.

The Illini wouldn’t find the end zone again, though.

On the other side of the ball, the Illinois defense had trouble containing Western Michigan’s ground game. The Broncos piled up 287 yards on the ground, which is the most the Illini have allowed through three games. Bogan led all rushers with 189 yards and two touchdowns.

The Illini were able to get after the quarterback, though, and recorded five sacks, two of which came on the first drive of the game. Defensive end Carroll Phillips continued his string of impressive performances with eight tackles and two sacks.

For the second straight week, the Illinois defense did not force a turnover.

“It’s up to us where we want to go for this season,” defensive tackle Rob Bain said. “This doesn’t define us unless we let it. “It’s up to us moving forward.”