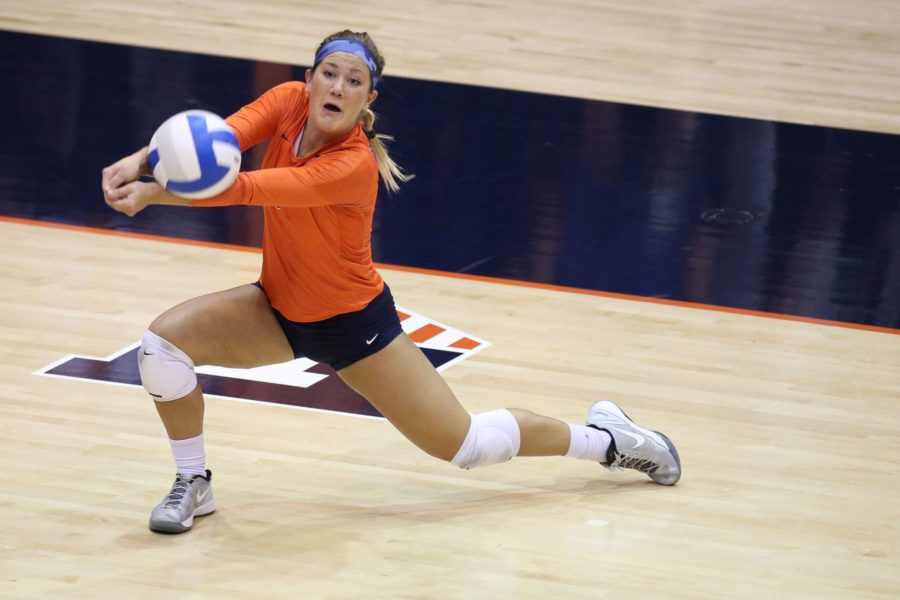 Illinois’ Brandi Donnelly digs the ball during the game against Purdue at George Huff Hall on Oct. 25.

Entering the Billiken Invitational on Saturday, the Illinois volleyball team had never lost a match against Murray State or Saint Louis.

At the end of the day, its perfect record stood. The Illini earned them the tournament title after defeating the Racers and Billikens, without dropping a single set.

Two weeks ago, Illinois was in the middle of a four-game losing streak that ended with a straight-sets loss against Oregon – its first and only straight sets loss of the season. Fast forward and the Illini have turned things around, and ended nonconference play on a five-game win streak.

“It helps when you’re not playing Pac-12 teams and they’re not the same physicality,” head coach Kevin Hambly said. “I think we’ve gotten in a better rhythm and we’ve passed better, but some of that has to do with the opponent.”

Murray State defeated Saint Louis on Friday night, before entering Saturday morning’s matchup with Illinois. But whatever momentum the Racers gained from their five-set victory against the Billikens did not translate over to the Illini.

Freshman Rachel Giustino represented Murray State on the all-tournament team and recorded 13 kills against Illinois. But the outside hitter, who stands at 5-foot-10, was one of the few highlights of the Racers’ offense.

In the first set, a kill by Giustino tied things up early at 1-1, but the Illini went on a 5-1 run behind kills from sophomore Ali Bastianelli, freshman Jacqueline Quade and senior Katie Stadick. Illinois was in full control for the rest of the set and match, winning 25-20, 25-13 and 25-11.

Junior Brandi Donnelly led the way defensively with 11 digs against the Racers.

“It feels really good,” Donnelly said. “This week in practice we focused on (what was stopping us) and the little things like taking care of our eye-work and things like that. I think practice this week really helped.”

Illinois’ last match of the Billiken Invitational against Saint Louis provided the same outcome for the Illini.

The Billikens haven’t had a successful year – they’re only 4-10 on the season – and even a home crowd at Chaifetz Pavilion couldn’t guide them to victory.

At one point in the first set, Illinois trailed 7-4, but a block and kill from Bastianelli stopped Saint Louis’ early run and momentum. The Illini took the lead 10-9 after a kill from Stadick and never relinquished it again, squeaking past the Billikens 25-22.

In the second set, Illinois won by a more comfortable margin. The 12-point victory was helped by three kills from Quade and Crittenden.

Illinois led the third set from start to finish and won 25-21 after a kill from Quade ended the set and the match.

“I think we did a really good job this entire weekend of staying (focused) on the things we’ve been working on,” Crittenden said. “A few times we did let those slip, but we were able to come back and compete.”

“She passed great,” Hambly said. “She played great defense. She took charge of all the back court and I thought she led. She did a really good job.”

Donnelly led the team in digs, totaling 37 throughout the tournament.

Illinois will face Purdue in its first Big Ten match of the season this week. Following his team’s fifth consecutive victory, Hambly said he feels good about his squad’s chances to compete in a tough conference.

“I hope this will carry over, and I think we focused on the details and we did a good job of executing that for the most part this whole tournament,” Hambly said. “I think we got some confidence going into that match.”