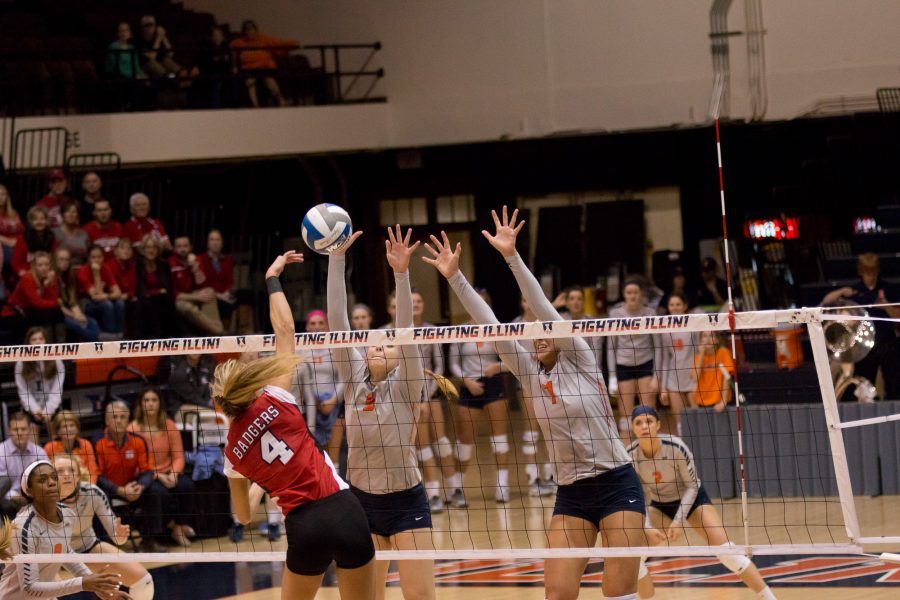 Illinois’ Ali Bastianelli and Jocelynn Birks attempt to block a Wisconsin hit during the match against Wisconsin at Huff Hall on Wednesday, Nov. 18, 2015. Illinois lost 3-2.

Sophomore Ali Bastianelli played in every match as a true freshman, starting in all but one, and her stellar defense earned her a spot on the All-Big Ten Freshman Team.

Named as one of the best newcomers in the Big Ten, her strong play was not the only honor she earned. She was given the nickname, “Kid Block,” courtesy of the long-time radio announcer for Illinois volleyball, Dave Loane.

Loane came up with the nickname for Bastianelli last season. And with the sophomore’s continued defensive prowess this year, the moniker has stuck.

“I’m going to be honest, it took me until the beginning of (this year’s) preseason to make the connection,” Bastianelli said. “I was like ‘Oh, Kid Block, like I’m a freshman, and I block a lot.’ But then my dad goes, ‘No Ali. Kid Rock is from Michigan. You’re from Michigan.’”

Bastianelli never realized that the nickname was in reference to the five-time Grammy winner from her home state. She said that she wished she had made the connection sooner. But in her defense, when Kid Rock’s best-selling album “Devil Without A Cause” was released in 1998, “Kid Block” was only one year old.

At 6-foot-3, Bastianelli, along with freshman Beth Prince and senior Katie Stadick, is one of the tallest players on the team and uses her height to play the position of middle blocker.

Bastianelli was one of the best blockers in the Big Ten last year, ranking second behind Nebraska’s Amber Rolfzen with 167 blocks on the season.

It took several months to fully recover, but Bastianelli is back to stuffing defenders at the net.

Most recently, she earned all-tournament honors at the Billiken Invitational. And in a match against No. 12 Stanford earlier this season, the Michigan native recorded 14 block assists – the most in Illinois volleyball’s 42-year history.

Bastianelli is averaging nearly two blocks per set so far this season and leads the team with 72 total blocks through its 11 non-conference matches.

“I’ll probably work more on my offense—not that I’m not going to work on my defense,” Bastianelli said. “Especially going into the Big Ten’s soon, I would like to become more of an offensive middle (blocker) than I have been.”

Before Illinois traveled to St. Louis for the Billiken Invitational and extended its win-streak, it was clear that head coach Kevin Hambly was on the same page as his standout sophomore.

“This is more like the Ali we started to see at the end of last year,” Hambly said. “She’s kind of back to where that is and maybe even a step further offensively. I’d like her to be a pretty prominent feature for us.”

Illinois begins its conference play Wednesday against Purdue. Whether Bastianelli will be used as more of an offensive weapon against the Boilermakers has yet to be determined.

But after recording 110 blocks in Big Ten play last season and increasing her block percentage during her sophomore campaign, one thing still remains clear: “Kid Block,” is a focal point in the Illini’s defense.