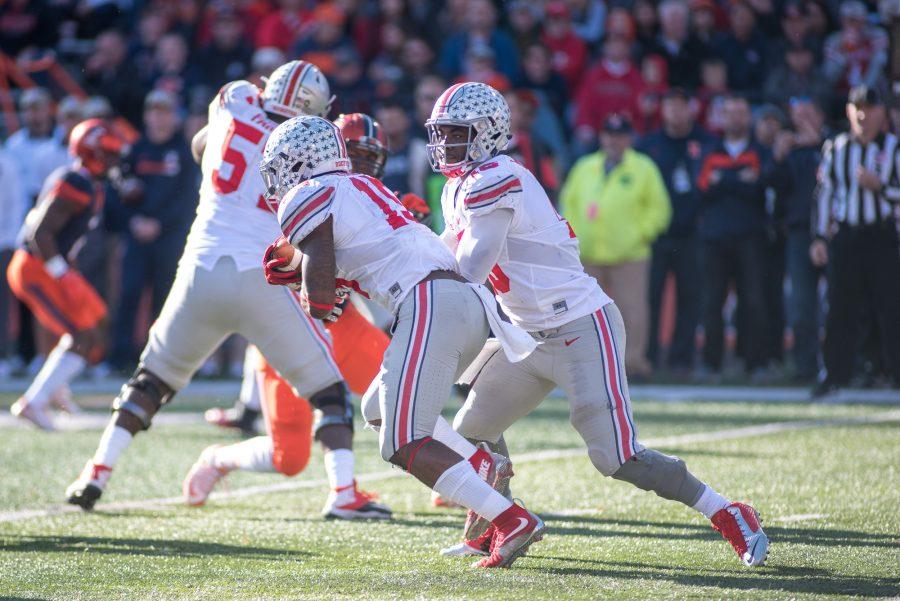 Ohio State quarterback J.T. Barrett hands the ball off to running back Ezekiel Elliott during the game against Illinois at Memorial Stadium on Saturday, Nov. 14. Illinois lost 28-3.

Just in case the rest of the country needed it, the Big Ten East used Week Three to pass along an intimidating message that it’s the most dominant division in college football.

The division’s top three squads — Michigan, Michigan State and Ohio State — further strengthened their early advantages for the College Football Playoff this past weekend, giving them each a sense of invincibility.

The Spartans and Buckeyes faced their first tests of the season in difficult road matchups against Notre Dame and Oklahoma.

Both teams passed those tests with few problems, pulverizing any hope that the Irish and the Sooners would make it to the Playoff.

Prior to this weekend, most people considered Michigan State and Ohio State potential playoff contenders but still had legitimate reservations for both.

The young Buckeye squad, though immensely talented, had yet to be challenged by a marquee opponent. Michigan State has an inexperienced quarterback and was coming off an uninspired performance against an FCS school.

The Spartans won by 12 points, though in reality, the game wasn’t even that close as Michigan State led by 29 at one point. In sum, it was a prototypical Spartan performance as they out-gained Notre Dame on the ground by 203 yards and possessed the ball for nearly 15 more minutes. In the meantime, Tyler O’Connor continued to show his high level of efficiency as a passer, throwing for 241 yards and two scores with a 73 percent completion rate.

We can now say the following with confidence: Michigan State returning to the College Football Playoff is a real possibility.

As impressive as the Spartans were, the Buckeyes put together an even more powerful performance.

The start of Saturday night’s game at Oklahoma may have been delayed due to lightning, but Ohio’s attack was nothing short of a ferocious blitzkrieg.

Ohio State’s no-huddle offense was in sync all night long, playing an essentially flawless offensive game with 444 total yards and zero turnovers. J.T. Barrett, who should be an early Heisman Trophy front-runner, tossed four touchdown passes — all to Noah Brown. The team’s ground game was equally as pristine, with a combined rushing performance of nearly 300 yards from Mike Webster, Curtis Samuel and Barrett.

The supposedly “inexperienced” Ohio State defense was equally as effective as it largely left Oklahoma’s Baker Mayfield null and void with two interceptions and a dismal total quarterback rating of 23.2.

Like Michigan State, the Buckeyes not only reinforced their playoff hopes but cemented themselves even more so as favorites to get there.

Even Michigan, which ostensibly was not supposed to be tested by Colorado, managed to prove its mettle in a come-from-behind victory. The Wolverines certainly weren’t as dominant as most expected, though the team’s ability to play through a dash of adversity may prove to be beneficial later in the season.

Everyone knew each of these three teams would certainly have a lot to say in deciding the Playoff, though it was hard to envision all three playing this critical a role.

After three weeks, the fact is that the Big Ten East (sorry, SEC West) is far and away the best division in the nation, and if things play out in the certain way, the division could very likely send two teams to the Playoff.

Starting Oct. 29, when Michigan State hosts Michigan, fans will get their first taste of how the division plans to pan out as each team gets a chance to face off against one another in what promises to be colossal Big Ten showdowns.

Dan is a graduate student in Media.
[email protected]
@danescalona77