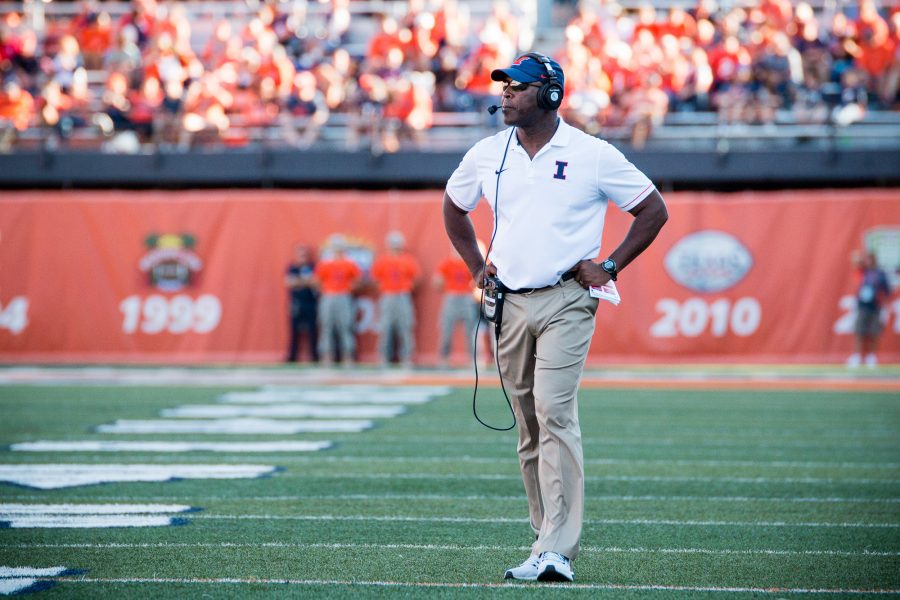 Illinois head coach Lovie Smith walks down the sideline during the game agaisnt Western Michigan at Memorial Stadium on September 17. The Illini lost 34-10. Lovie has lost two of his first three games as head coach of Illinois.

I have been seeing Illini fans go through the five stages of Lovie, which is similar to the Kübler-Ross stages of grieving.

Note that I say similar — the end result is significantly different, but more on that in a moment.

The first stage is denial. For many, it happened after the North Carolina game. “No, this is still a good football team! They’ll bounce back and trounce a MAC opponent like Western Michigan!”

The second stage is anger. This was obvious on Twitter after the Broncos rowed their proverbial boat all over the Illini. The lasting images of that game also linger: P.J. Fleck sprinting down the field like a madman and a somber Lovie Smith addressing the media after the blowout.

Stop for a moment.

You’re angry because you’re starting to realize that this year’s football team is, what’s the word …bad. You haven’t accepted this theory yet because, of course, you haven’t gone through the third and fourth stages of grieving: bargaining and depression.

These stages will come. You’ll find yourself on your knees, praying to the Illini Gods after a trouncing from Nebraska or, Butkus forbid, after a loss on the road at the hands of Rutgers. Surely then you’ll be well on your way to acceptance.

But not before the fourth stage: depression. This will come down on you like the hammer of Thor. You’ll find yourself spending long nights alone, deep in the YouTube-sphere, trying to dig up videos of the good old days. Those days when Juice Williams galloped all over Ohio State.

At this point, I hope that you’ve all realized I’m kidding. But, for those of you who are actually heading for the exits, I’m concerned. I’ll get to you in a moment, but first, a confession.

I was wrong about this year’s team, too. But, since I am an unbiased and ethical journalist, I do not grieve. I simply accepted the obvious conclusion before me: This team is bad.

This shouldn’t come as a surprise to anyone. This is — more or less — the same crop of players from last year’s 5-7 team.

It was naive of me to think that this coaching staff had been given enough time with these players to truly transform them. Beforehand, I understood that this was a process; however, I still thought that six or maybe even seven wins was a realistic number. I now realize just how foolish I was.

This year is going to be a long one for many. Four or five wins would be respectable with the daunting schedule ahead. It would be a step, and a necessary one at that, in the right direction.

Rome wasn’t built in a day (or so they tell me). In turn, the Lovie kingdom needs time. Lovie and his staff have to coach out the kinks, recruit the right players for their system and instill a completely new mindset in their team. You know the narrative, of course, but the reminder is important.

Back to the fans. You’re angry right now about this football team’s performance thus far. I understand.

But, many of you will soon accept this season as a step in the right direction. And as long as Illini fans can remember that, they can stay content during this interim stage.

Patience is a virtue. So, Illini fans, give it time. I know that you will.

Diligence is also like a virtue. And I have no doubt that this Lovie-led team will work diligently to turn this program around.

I leave you with this: Press on regardless, Illini nation.

Kevin is a junior in Media. [email protected]
@KevOMcCarthy