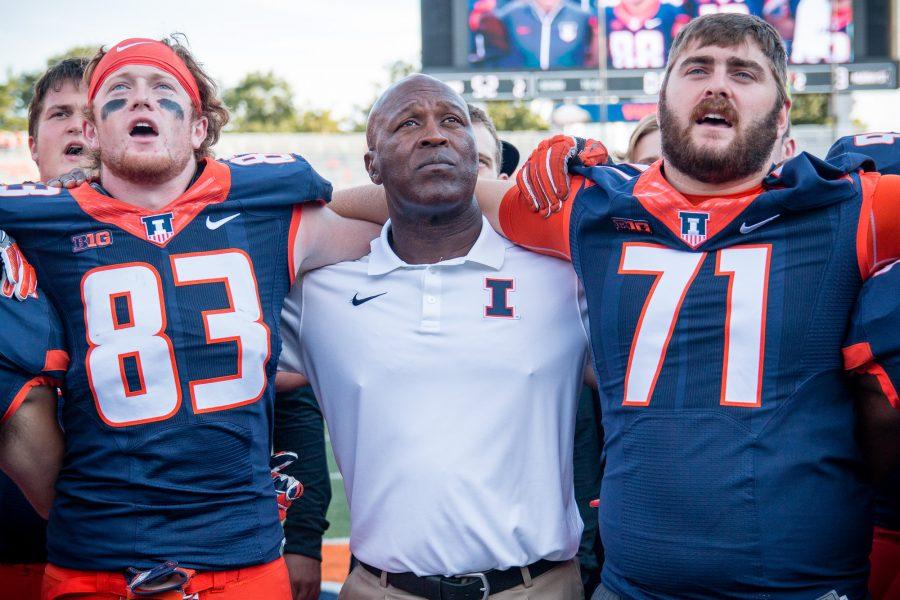 Slouched in his chair, eyes fixated on the ground, Joe Spencer addressed the media sans his usual upbeat, charismatic tinge of voice. Without even a glimpse at the box score, the senior captain knew how bad the Illinois football team had played in its 34-10 loss to Western Michigan on Saturday.

One stat still caught him off guard, though.

“It was hard when you walk off the field to have a reporter tell me that we ran for three yards after sacks were put in,” Spencer said. “That’s not acceptable.”

Illinois’ offensive line had a rough go against the Broncos over the weekend, creating space for a total gain of 32 rushing yards and allowing quarterback Wes Lunt to be sacked four times, one of which cost him a fumble.

“It was a tough film session to watch,” Spencer said.

As a unit returning three starters from last year’s line that allowed just 20 sacks in 12 games — good for seventh in the Big Ten and 45th in the nation — the Illini O-line has yet to gel under head coach Lovie Smith.

Illinois is 11th in the Big Ten in total rushing, and Lunt has been brought down eight times in three games.

As a newly appointed team captain, Spencer brought it upon himself to ensure that his fellow linemen didn’t let the recent trends fester, especially through the team’s Week Four bye.

“It’s a week where you have to have a positive tone in the locker room and that comes back on to us captains and us seniors and the other leaders of the team,” Spencer said. “Making sure everybody stayed up, and that was kind of what we did on Sunday.”

The entire team met Sunday, and Spencer said the offensive line had a heart-to-heart during its position-specific pow wow.

“It can’t be one guy on the O-line, or a receiver or Wes back there — we’ve got to be on the same page,” Spencer said. “True brotherhood.”

The way the players held themselves accountable in the days following Saturday’s loss is what Smith has come to expect out of the veteran roster he inherited. The team captains were chosen in part for their ability to rally others through adversity, and Spencer has proven capable.

Spencer has embraced the leadership role that he inherited due to last former Illini captain Ted Karras’ departure for the NFL.

Similar to how the defensive linemen are in constant communication with Illini-turned-Oakland Raider Jihad Ward, Spencer says he still talks to Karras all the time.

Karras, who recently made his first NFL start with the New England Patriots, left a lasting impression on Spencer. One moment that sticks out to Spencer was his first start as a redshirt-freshman. He was filling in for an injured Karras, who immediately took the then 19-year-old Spencer under his wing.

“He taught me so much,” Spencer said. “Last year when he was a captain, learning from him prepared me for little things that would come up as a team. He means the world to me and to see him be so successful is huge. I just love seeing him out there doing what he does because I don’t think anyone loves football more than Ted Karras.”

As a stalwart on the right side of the offensive line for four straight seasons, Karras provided a certain stability that made it easier on Spencer and the rest of the line to stay on the same page. That was especially the case last season when the same five linemen started all 12 games for Illinois.

Through three games this season, seven different Illini linemen have made starts, and injuries have forced offensive coordinator Garrick McGee to continuously shuffle the deck on the fly. Spencer missed the opener against Murray State. Freshman guard Gabe Megginson left the North Carolina game with a leg injury and hasn’t played since. And senior left tackle Austin Schmidt did not practice on Tuesday due to an injury that forced him off the field against Western Michigan.

The bye week came at a perfect time for the banged-up Illini, and Spencer hopes the next-man-up really sets in over the next few weeks.

“We have to do that just a little bit better,” Spencer said. “Guys have had ups and downs just being cohesive as a unit.”

Illinois practiced twice during its bye week, allowing the players some free time. Spencer said he and the rest of the O-line plan to get together to watch some football Saturday — including Week Five opponent Nebraska’s tilt with Northwestern.

Even though game planning doesn’t begin until next week, the Illini have their sights set on the nine-game conference slate. Spencer said winning the Big Ten West was the goal since the start of the season and it hasn’t changed.

How the offense’s front five meshes throughout Big Ten play remains to be seen. But if one thing’s for sure, it’s that Spencer’s will be the voice it follows.

“Every team wants a Joe Spencer on it,” Smith said.