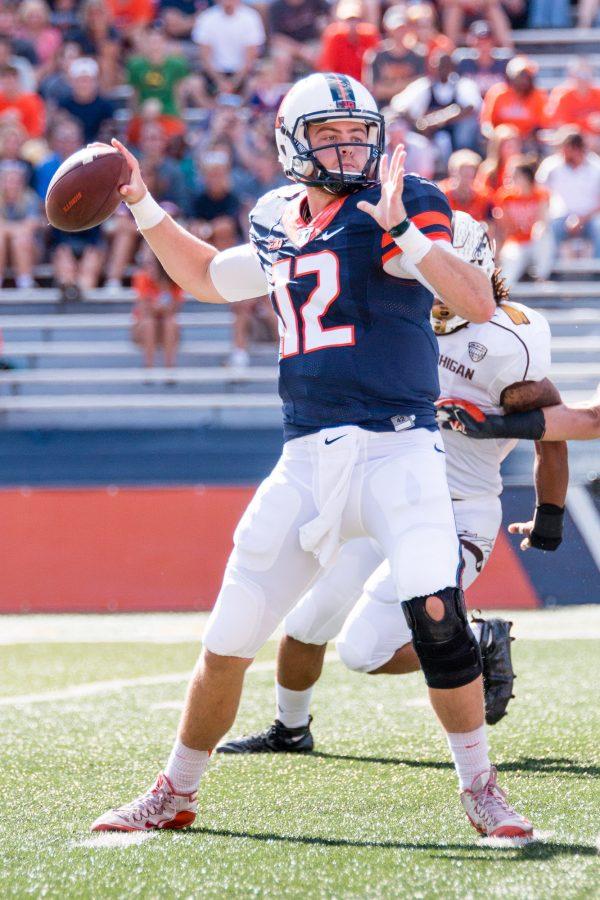 Illinois quarterback Wes Lunt (12) looks to pass the ball during the first half of the game against Western Michigan at Memorial Stadium on Saturday, September 17. The Illini are losing 24-7 at half.

Since head coach Lovie Smith first arrived at Illinois, his calm but uncompromising demeanor drew comparisons to one of the older players that the first-year head coach had inherited — Wes Lunt.

The senior quarterback has built a reputation of being a steady-headed, all-business play-caller, even through the turbulence of playing for three head coaches in as many seasons. Lunt’s stone-faced manner and outward appearance of tranquility has been praised as a saving grace for an Illinois team that has gone through a lot since he first transferred here in 2013.

But with a rocky start to the season for the Illini, Lunt’s passive style of leadership has come under question, specifically on the field.

“I want to see him lay it on the line,” offensive coordinator Garrick McGee said. “Where he needs to move forward is just a little more passion and a little more intensity.”

A large part of the new coaching staff’s transition to Illinois was learning about the roster they inherited, player by player. McGee admitted on Monday that he is still learning about Lunt’s specific style of leadership.

And though McGee realizes everyone has their own ways of leading, he wants Lunt to establish a more commanding presence, especially in his role as an offensive captain.

“It always helps because the players are all looking for direction, in particular on the field,” McGee said. “When the players vote for captains, they’re voting for people that they’re looking to follow. So during the game, it always helps when the captains are the ones that are the guys that are spear-heading the passion and emotion that goes along with winning a football game.”

Lunt has received the majority of his offensive snaps as an Illini from fellow captain, Joe Spencer, who has embraced his role as a leader this season.

At times, Spencer looks to fill the void that Lunt’s voice doesn’t fill, but the senior center doesn’t believe his quarterback needs to change his own personal leadership style.

“He’s vocal in critical situations and he does a great job of knowing when he needs to talk,” Spencer said. “Guys might say I’m a little more vocal, but that’s just our relationship and how we play off of each other.”

Through three weeks, Lunt has thrown for 665 yards, with a 62 percent completion rate and six touchdowns. While the stats remain solid, Lunt’s play led Illinois to a 1-2 record heading into the team’s week off.

The Week Four bye came at an opportune time and was filled with heart-to-hearts between certain position groups, individuals and the team as a whole. The same held true for Lunt and McGee.

Lunt said each coaching staff he’s played for has had different expectations in terms of his role as a leader, and although he doesn’t plan to dramatically alter his on-the-field personality, the open dialogue between Lunt and McGee will bring them closer to being on the same page.

“It’s just continuing to talk to Coach McGee, and knowing his expectations for me and what he wants out of me,” Lunt said. “Everyone knows who I am and how I act. I’m not the most vocal but I do show emotion. You might not always see it, but I definitely do.”