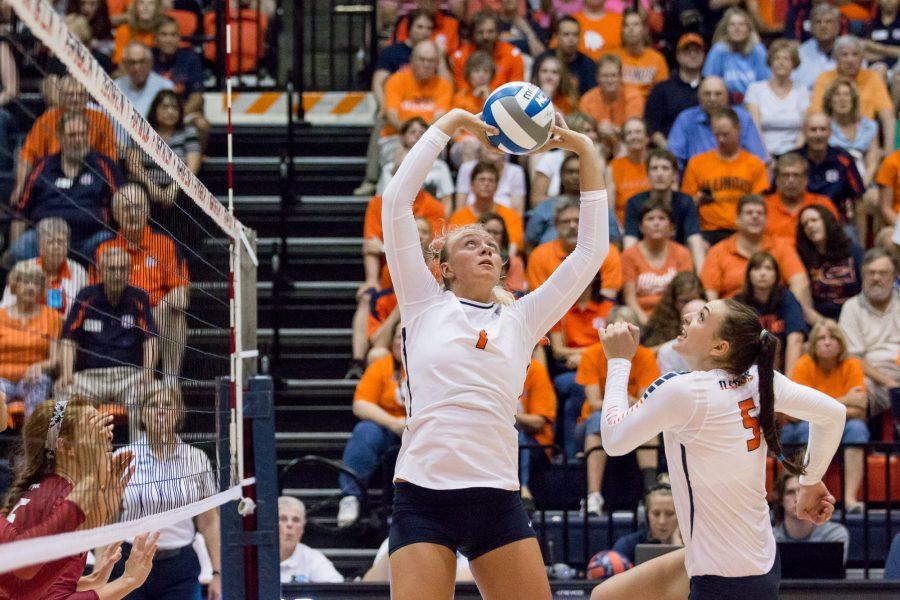 Illinois setter Jordyn Poulter (1) sets the ball to Ali Bastianelli (5) during the match against Arkansas at Huff Hall on August 26. The Illini won 3-0.

The Illinois volleyball team moved to 9-4 on the season after defeating Rutgers at home, but the win came without senior Katie Stadick.

The Illini’s middle blocker was dressed in full uniform and cheered her teammates on throughout the match against the Scarlet Knights, but it was clear after the first few rotations that she wouldn’t play.

“Katie could’ve played,” head coach Kevin Hambly said. “It was my choice not to play her. Just wanted to rest her a little bit.”

Hambly didn’t disclose what was specifically wrong with Stadick’s wrist or if she would play in Illinois’ next match against defending national champion Nebraska. But he did admit that her discomfort came after she made a block attempt.

This isn’t Stadick’s first run-in with injury this year.

Before the season even started, she fractured her left thumb during the preseason but played throughout Illinois’ first few matches of the year.

Stadick was named the Illini Classic Most Valuable Player after leading the Illini to its third-straight tournament title. She registered 33 kills and 14 blocks in the tournament.

The Illini won both games, but in the latter, Strizak performed at a much more efficient level. Her attack percentage was .089 when facing Purdue, but against the Scarlet Knights, Strizak’s percentage soared to 0.364.

“I thought I did alright (against Rutgers),” Strizak said. “But I still have a lot more work to do. I think that the way we played defense and everything, and how the way the ball was spread out put me and a lot of the other hitters in a lot of good positions to score.”

Hambly said that he wanted to take some pressure off of his senior by putting her in a few different positions on and off the court.

“She was internalizing a lot,” Hambly said. “She thought it was up to her to make sure we were successful, and that was just not fair. (The burden) needs to be spread out a little bit. It’s hard to be a senior sometimes. This senior was taking too much on and so she needed to kind of let go. I think she’s let go, and that’s helped her play at a higher level.”