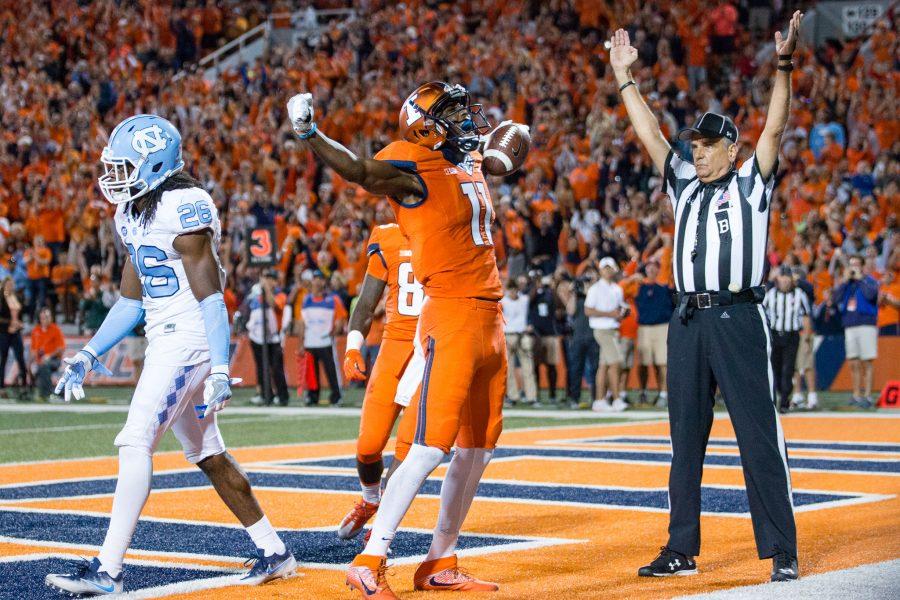 Illinois wide receiver Malik Turner(11) celebrates after scoring a touchdown during the game against North Carolina at Memorial Stadium on Saturday, September 10. The Illini loss 48-23.

In Illinois’ win over Nebraska last year, former Illinois wide receiver Geronimo Allison may have made the most memorable catch of the season, but a different receiver made a name for himself on an earlier play in the same drive.

The team moved the ball 72 yards in six plays and 41 seconds to get that touchdown. A majority of those 72 yards were gained in one play — a 50-yard heave to wide receiver Malik Turner.

“I don’t remember too much about it,” Turner, now a junior, said. “It was pretty much just run like hell.”

With playmaker Allison now graduated, that role falls to Turner.

Through his first two seasons with the Illini, Turner had four touchdown receptions. Through the first three games of this season, he has three touchdowns. He has been Lunt’s top target, leading the receiving corp in both receptions (15) and yards (223), and he also has the longest catch of the season when he scored a 68-yard touchdown in the first game against Murray State.

This is the first time in his career at Illinois that Turner has been the guy in the spotlight. He arrived at the same time as fellow wide receiver Mike Dudek, who set records for freshman receptions and receiving yards and was a First-Team Freshman All-American.

In Turner’s sophomore year, he played behind Allison and wide receiver Desmond Cain.

But he didn’t get the spot just because he was the next guy up. With Lovie Smith taking over as head coach, Turner had to prove himself. According to Smith, he did just that.

“He’s been a good player since I’ve been here,” Smith said. “He can catch the ball. He has good size, and he has big play ability. He knows how to get the ball in the end zone, and we need that. We got to score more points. It’s as simple as that.”

Turner is seen as a leader for the Illini on the field by his teammates. He said it is not a role he naturally inhabits, and instead chooses to lead by example. He hopes others continue to follow his lead.

Wide receiver Justin Hardee said Turner’s focus on the field helps himself stay locked in. The relationship works both ways; Hardee is a senior and one of the oldest guys on the team, and isn’t shy about giving advice to the younger Turner.

“Every day that we are on the field, he sees something that I don’t see, and he tells me,” Turner said. “When he tells me that, I understand. I don’t get an attitude because he knows what’s up, and if I tell him, he knows the same. We both see it differently, and we learn from each other.”

Hardee spent all of last season on the sidelines with an injured foot. He said Turner’s play this season comes as no shock to him.