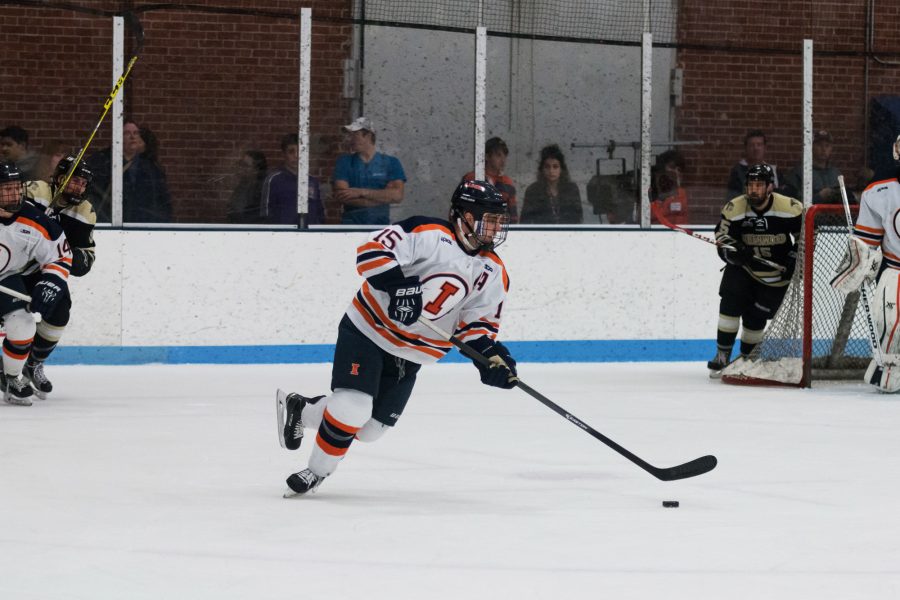 Even after Eric Cruickshank tallied his third goal of Saturday night late in the second period, Illinois hockey head coach Nick Fabbrini stood on the bench as he chewed on the cap of a ballpoint pen.

Following a six-goal and two-assist weekend by the junior center, Fabbrini was only focused on a disappointing weekend from his special teams unit, especially with their allowance of five goals on the penalty kill.

“Unfortunately, (our penalty kill) let (starting goalie David Heflin) down a little (Saturday) giving up two goals, but that’s an area we’re going to look to improve on,” Fabbrini said.

The Illini opened the 2016-17 campaign with a 6-2 win over Illinois State in Bloomington, Illinois, on Thursday night.  The team returned home to grab a pair of 4-2 and 7-2 victories over Michigan State on Friday and Saturday, respectively.

Luzynski, assisted by great team defense and deflections in the slot, held the Illini to only one goal through the first two periods. Cruickshank broke through in the third period, recording his first two goals of the season en route to the first victory for the Illini at the Illinois Ice Arena this season.

“For me, I was a little frustrated (Friday), and I just tried to stick with it and keep doing the things that worked,” Cruickshank said. “Things were just going my way, and the puck was finding my stick, and I got a couple goals out of it.”

Cruickshank, who led the Illini with 23 goals last season, recorded a hat trick in Saturday’s blowout win, which forced Michigan State to pull Hoedeman and put fellow freshman Max Quertermus in the goal midway through the second period.

The Illini played a much more disciplined brand of hockey against Michigan State than Illinois State, recording only 29 penalty minutes over the final two games. Junior forward James Mcging paced Illinois with 49 points last season but was ejected from Saturday’s win for fighting.

Cruickshank said that Illinois’ plan on Saturday was to be more aggressive with the Spartans.

“We were hitting a lot on Saturday night,” Cruickshank said. “We saw a couple of guys get injured, which obviously we don’t want, but when we’re hitting guys and rattling the defense, they’re not going to want to get that puck.”

Illinois hits the ice again Oct. 7 with a weekend set against Lewis University.

“(Saturday) was a big improvement over (Friday’s) effort for sure,” Fabbrini said. “We’re going to look to keep trending in the same direction.”