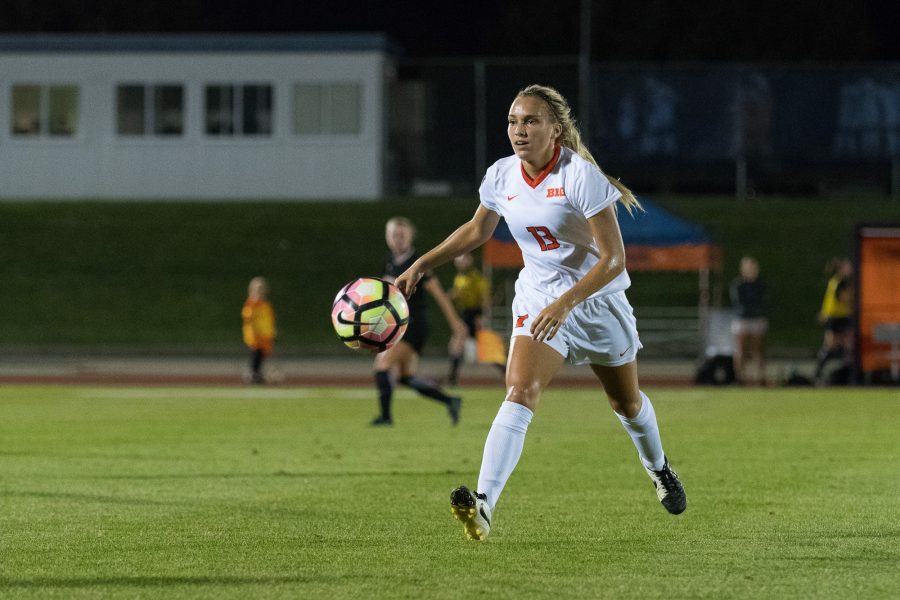 Illinois’ Summer Schafer lobs the ball during the game against Purdue at Illnois Soccer Stadium on Thursday, September 15. The Illini lost 0-2.

Quote of the game: “We have to believe in what we can do, not what our results say about us.” — head coach Janet Rayfield

Up next: Oct. 6 vs Michigan

Friday night was a challenging task for the Illinois soccer team: a trip into the Nittany Lions’ den to play the reigning national champions.

Illinois was outplayed by No. 14 Penn State in a 2-0 defeat. Offensive problems resurfaced for the Illini as the Nittany Lions dominated possession.

“We made too many technical mistakes and just didn’t respond well as a group to those mistakes,” head coach Janet Rayfield said. “We got outplayed by a very good Penn State team.”

The teams last met in the first round of the 2015 Big Ten Tournament, when the Illini fell 3-1. This season’s match was a mostly one-sided affair.

Senior Summer Schaefer gave Illinois an opportunity in the first minute, but Penn State struck soon after. The Nittany Lions got on board early with a goal in the 12th minute from the team’s leading scorer, Frannie Crouse.

Wheatley made her seventh start of the season and played the full 90 minutes for the fourth time. Coming off a strong shutout of Rutgers last weekend, she made three saves against a 21-shot barrage from Penn State.

Wheatley has been in the net for every game against ranked opponents. The loss to Penn State drops her record to 0-4-1.

After the first half, the Penn State offense dominated possession. The Illini could not manage a shot in the second period. Penn State added to its lead in the 65th minute when sophomore Charlotte Williams found an open Marissa Sheva who knocked the goal in past the left post.

Illinois was outshot for the second consecutive match Friday night. None of the Illinois shots — all in the first half — were put on goal. The Illini had not been outshot since August.

“Although we have struggled to score, this was the first game that we struggled to keep the ball,” Rayfield said. “Penn State had a lot to do with that.”

One positive sign for Illinois was the return of junior forward Kara Marbury. Marbury has missed time due to injury this season, and Friday night was her fifth match of the season. Marbury was the team’s second leading scorer last year. Her return could be significant for a team that has struggled turning offensive opportunities into goals.

“We have to believe in what we can do, not what our results say about us,” Rayfield said. “We will keep teaching and challenging our team to be better.”