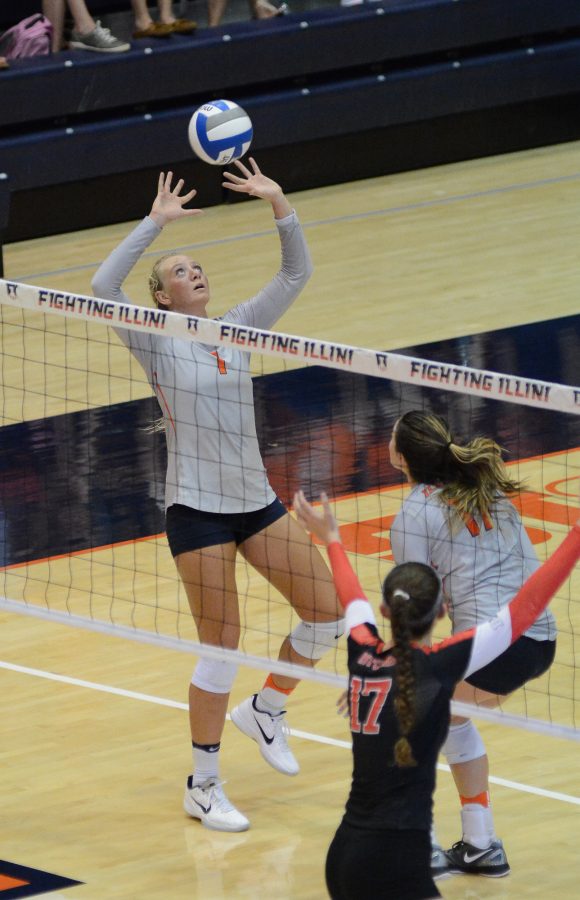 Sophomore Jordyn Poulter has been the centerpiece of the Illinois volleyball team’s offense for two years. As the setter, she is involved in most plays. Illinois’ match against Maryland was no different for Poulter, whose impact could be felt throughout the match.

The standout sophomore recorded 47 assists, nine digs, three kills and two block assists in a five-set victory over the Terrapins. In the fifth set alone, Poulter recorded eight assists and one block assist to help propel the Illini to victory.

“I thought she managed her emotions well,” head coach Kevin Hambly said. “She’s a really good setter. That’s it. She can deal and she can play. She’s just being herself.”

Early in the season, Hambly compared Poulter to basketball greats LeBron James and Magic Johnson because of her unselfish play. She is currently ranked fifth in the Big Ten for total assists with 571 assists this season.

Returning home to face Rutgers, Crittenden continued her outstanding play by recording a team-high of 0.450 hit percentage with 11 kills and two block assists. But when No. 1 Nebraska took on Illinois at Huff Hall, the senior’s play dropped off.

Crittenden managed four kills despite having 21 total attempts. At the end of the straight-set loss, her -0.190 hit percentage was the worst on the team.

In the team’s victory over Maryland, Crittenden’s woes continued with only six kills and a 0.118 hit percentage.

“We couldn’t go through Naya,” Hambly said. “We didn’t get her going the way we wanted to.”

Illinois has traveled thousands of miles to compete against some of the best volleyball teams in the country this season, and this past weekend featured more of the same.

The Illini boarded a flight to the East Coast to take on Maryland in their fourth Big Ten match of the year. For the first time in nearly a month, the team competed on Sunday.

Hambly said that there were pros and cons to playing on the first day of the week as opposed to the last.

“The extra day was fine for prep,” Hambly said. “We got time to take it a little bit easier. I guess what I’m more worried about is what it means for our rest and trying to play again on Wednesday.”

The team’s off day, which is usually Sunday, was pushed back to Monday, giving the Illini only one day to practice before facing Northwestern at Welsh-Ryan Arena.

“I’m not super stocked on that,” Hambly said. “But it is what it is and we’ll deal with it.”