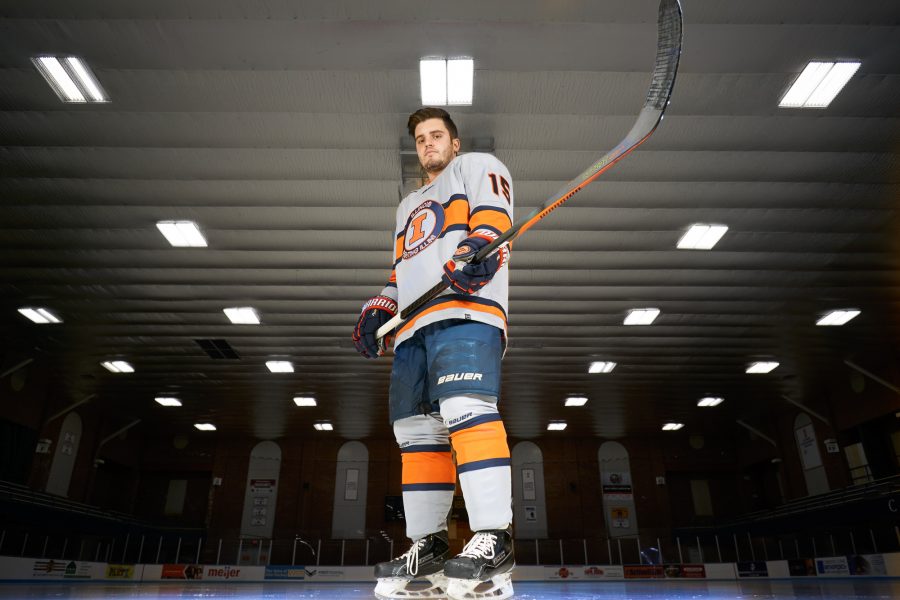 Illinois hockey’s Eric Cruickshank spent his summer in a hoodie and sweatpants, lacing his skates every day to work clinics at the Glacier Ice Arena in his hometown of Vernon Hills, Illinois.

“It’s tough to have a job in the summer and be on the ice, so it’s nice to be able to combine those two,” Cruickshank said. “I just try to stay on the ice as much as I can. I just want to stay on top of everything.”

The junior center most recently finished up his fifth summer of working hockey camps in the Chicago suburbs. At the camp, run by Boston-based Pro Ambition Hockey, Cruickshank worked with kids from 7 to 14 years old.

“The thing I specifically harp on is doing every drill we do to your best ability and do it hard every time,” Cruickshank said. “Hockey isn’t a slow sport, and you have to be able to do everything fast.”

Cruickshank was born 30 minutes outside Toronto but moved to Vernon Hills as a child. Born into a Canadian family, Cruickshank started skating at a young age.

“I actually started (playing hockey) at 4 and didn’t like it because my feet used to hurt all the time,” Cruickshank said. “I took like six or seven months off and told my parents I wanted to try it again.”

Ever since falling in love with the sport, Cruickshank has practiced throughout his Illini career what he preached to the kids at the camp during the summer.

“He’s a guy that whenever there is an optional practice, he’s there,” said Illinois head coach Nick Fabbrini. “He’s always asking me to come help him work on things. He’s always looking to get better and it shows.”

Cruickshank’s coaching and practice in the summer has helped him race out of the gates in the 2016-17 campaign. He tallied six goals and two assists in the first weekend of the season, guiding his team to a 3-0 start.

“(Discipline) is one thing that I took into consideration over the summer, realizing that (poor judgment) can’t be something I do, and I worked on it a lot, and right now it’s working well,” Cruickshank said. “I just have to try to keep level-headed during the game and help the whole team stay together.”

This increased focus paid off in the first three games, and he only recorded a two-minute minor in the season opener.

Fabbrini did not name Cruickshank an alternate captain prior to the season, but his coaching staff is still relying on him and fellow top-line forward James McGing to carry the load offensively for the Illini this season.

“(Cruickshank’s) fast and a powerful skater, and he’s got a great shot,” Fabbrini said. “Offensively, he’s really starting to round out his game and become a more complete player.”

As Fabbrini praises Cruickshank on coming into camp this year with more offensive skills, Cruickshank preaches the same message to all the kids he coaches.

“You’ve got to work on your skills, like skating and shooting,” Cruickshank said. “But the most important thing we work on (with the kids) is working hard and never giving up.”