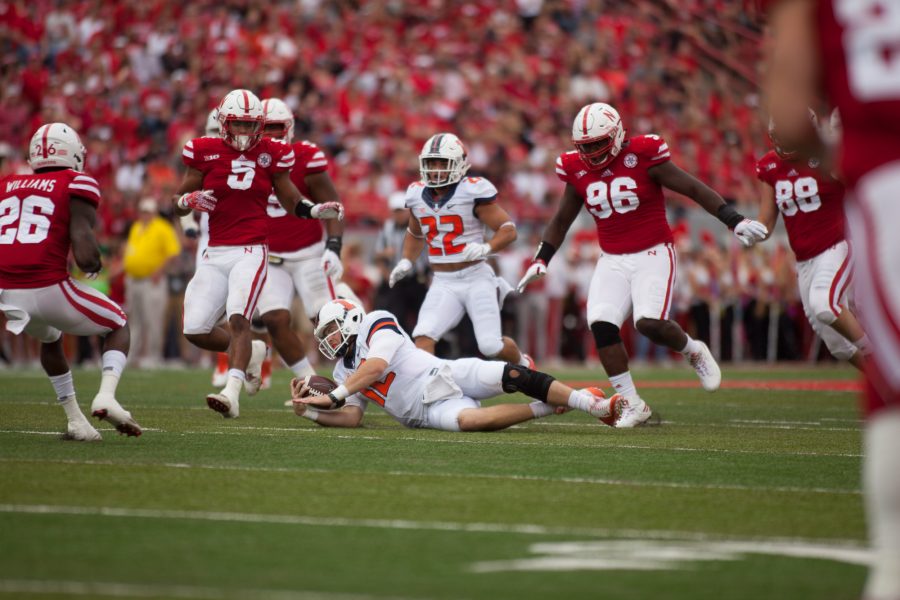 The Illinois football team has 97 players on its roster, but 98 orange-and-blue jerseys were on display for Saturday’s game at Nebraska.

To honor late Cornhusker punter Sam Foltz, who died in a car accident in July, the entire Illinois roster signed a commemorative No. 27 Illini Foltz jersey to give to the Nebraska specialists at the 27-yard-line before kickoff.

The tribute was spear-headed by long snapper Michael Martin, who presented the special jersey to Nebraska kicker Spencer Lindsay.

“This is a token of how we feel,” Martin could be heard saying during the presentation. “Sam, he wasn’t an Illini, but we love him anyway.”

Lindsay then took the Illinois Foltz jersey to the Nebraska sideline to place it next to Foltz’ official jersey, which has been displayed on the Cornhuskers’ bench all season.

The Illini didn’t leave Lincoln with a win, but they returned home knowing they played a part in a fellow Big Ten team’s healing process after this summer’s tragic loss.

“Knowing how tough that was for their team, we just wanted to show some sign of appreciation and dedication to that kid,” offensive lineman Nick Allegretti said. “I know he worked hard, and he’s not forgotten.”

One of the nearly 100 players who signed the commemorative jersey was senior linebacker Hardy Nickerson, who is well-versed in dealing with the sudden loss of a teammate.

In 2014, Nickerson’s California teammate, Ted Agu, passed away during a team workout. Agu, who was a senior walk-on defensive lineman at the time, remains in Nickerson’s mind to this day, constantly serving as an inspiration for his work ethic on and off the field.

“I know what those guys are going through,” Nickerson said. “You never want to go through something like that, especially with a guy that grinds with you every day and puts so much work in.”

Nickerson said being able to rally around his fellow teammates as well as the support the players received from other teams was instrumental in his personal grieving process following Agu’s death.

“Football is a very aggressive game and people kind of get mixed up, but there’s love in the game, and we do honor and respect our opponents, Nickerson said. “You never want to see another brother go through that.”

Offensive coordinator Garrick McGee was proud of Martin’s organized tribute to Foltz, and knows that solidarity among opposing teams can be important when a fellow player or coach passes away.

McGee was an assistant coach for Northwestern when then-head coach Randy Walker suddenly died of a heart attack in the 2006 off-season. He was also the offensive coordinator at Arkansas when tight end Garrett Uekman was found dead on campus with two games remaining in the 2011 season.

“It’s such an emotional hit for any program to have one of their kids, or in Northwestern’s case, their head coach, pass away,” McGee said. “But it’s always good to feel support from other teams and knowing that everyone’s praying for you and really supporting you emotionally.”

A commemorative coin was used in all Big Ten coin tosses this past weekend to honor Foltz and Michigan State punter Mike Sadler, who was in the same car as Foltz during the fatal accident.

Foltz and Sadler were 22 and 24 years old, respectively.