Future the focus this week for Illinois football 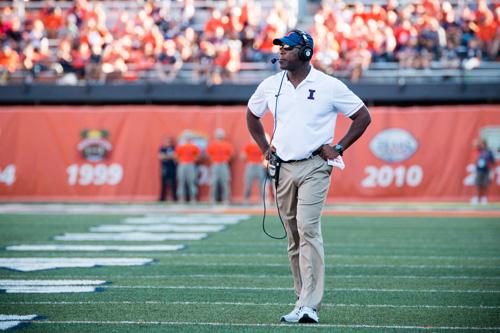 Illinois head coach Lovie Smith walks down the sideline during the game agaisnt Western Michigan at Memorial Stadium on September 17. The Illini lost 34-10. Lovie has lost two of his first three games as head coach of Illinois.

Coming off a runaway loss at Nebraska, Illinois football has a lot of work to do to on the field.

But the focus this week at Monday’s press conference was actually about matters off the field — Illinois’ official announcement of the Memorial Stadium renovations.

While Saturday’s game was discussed, it was almost an afterthought compared to listening to athletic director Josh Whitman announce plans for the stadium.

When head football coach Lovie Smith followed with his remarks, the weekend’s loss was dimmed in light of questions about the renovations.

He still discussed the defeat, but an opportunity to discuss the future seemed like a welcome change of pace for the first-year coach.

Illinois hosts Purdue this weekend, giving the Illini what should be their first victory in over a month.

The Boilermakers (2-2) are coming off a 50-7 loss to the Terrapins. The score was never close in that game, whereas Illinois lost 31-16 in Lincoln and had the lead for a large portion of the game.

Saturday is an expected win. Illinois has confidence for this week, and the players at Monday’s press conference seemed to show it.

But when it came to talking about the renovations, they seemed just as excited, even if they won’t experience it as Illinois athletes themselves.

They’ll come back as alumni to new people in their positions and new renovations.

Offensive lineman Nick Allegretti said he’s not a material person and the facilities wouldn’t have mattered to him when he was in the recruiting process.

But it’s hard to say those things wouldn’t matter. New facilities can be used as a bargaining chip, and as colleges update, that is bound to be a part of a recruiting pitch to players and even coaches.

The renovations were a key part of Whitman’s pitch to get Lovie to Illinois. It’s a cycle.

Good facilities can be used to attract good personnel who can then attract good players. As Whitman stated, it’s about building a championship team. That won’t come from just play on the field; rather, it’s a collection of tiny things that take time.

The $132 million renovations are expected to be finished by 2020. By that point, Illinois should be well on its way to football success on the field. Lovie will finally have his recruits and it will be his team.

Whether he can translate all the variables to true success remains to be seen. It’s all a matter of time.

But for this week at least, with planned renovations and a home match against a Big Ten team possibly worse than Illinois, the future seems bright.

Charlotte is a senior in Media
[email protected]