Ratz sisters have strong bond at home and on the pitch 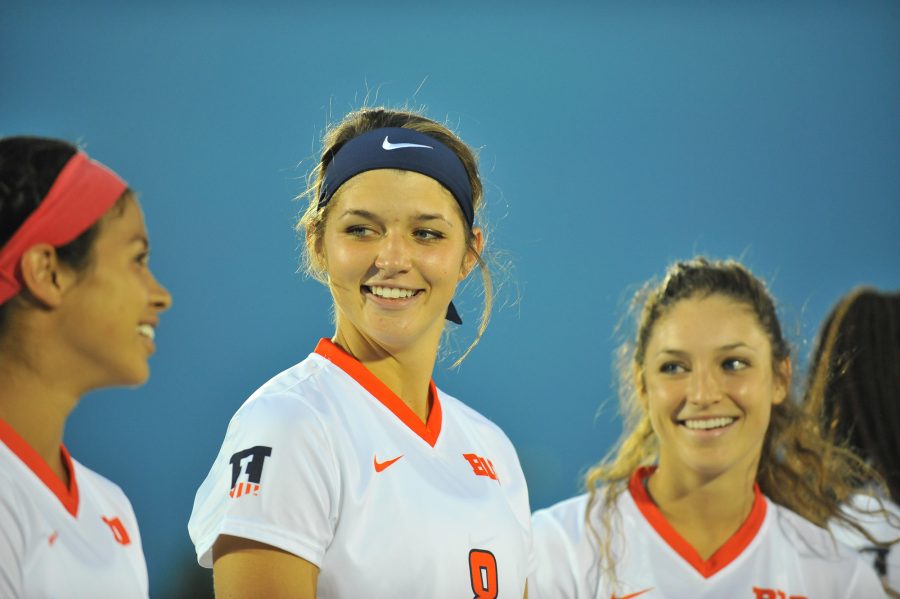 Caroline (left) Ratz and Katherine (right) get ready to play before home game.

Hidden stat: 0 – Conference losses for Michigan, they are on a 7-match win streak

Illinois soccer’s Katherine and Caroline Ratz have grown up sisters at home and as teammates on the pitch.

“We’ve been by each other’s side the whole way,” sophomore forward Caroline said.

Katherine, a junior midfielder, started playing soccer in their backyard in Zionsville, Indiana. The game was introduced to them by their neighbor when the sisters were in elementary school.

The two loved the sport immediately and playing together has given them good chemistry on and off the field, Caroline said.

Each developed different playing styles based on their height — Caroline is the second-tallest player on Illinois’ roster at 5-foot-10 while Katherine stands at 5-foot-5.

“Katherine’s all one pace and is super aggressive,” Illinois head coach Janet Rayfield said. “Caroline is athletic and physical and strong, but much more laid back. One plays with a smaller sense of composure and the other plays everything composed. They are opposites.”

Katherine and Caroline ended up playing on different club teams growing up. They were reunited when both played varsity soccer at Zionsville Community High School.

“Once we got to high school I guess that team chemistry developed more,” Katherine said. “It was exciting to be on the field together and have that sister telepathy.”

Their hard work paid off in Katherine’s senior and Caroline’s junior season. They were both put in as forwards in a 2013 sectional.

“(Our coach) said, ‘We are throwing you in, you guys just gotta score,’” Katherine said. “We went and then five minutes later, we scored.”

Their team won that sectional, and it remains both sisters’ favorite memory.

As a senior, Katherine had to decide which school she would attend to continue her soccer career.

The oldest of four children, Katherine kept family in her mind when she was making the decision.

“I just remember being on the golf cart (during an Illinois visit) with one of the seniors saying that, ‘This team is so family-oriented. Janet is like a mother to us,’” Katherine said. “As soon as she said that I fell in love.”

Katherine ultimately chose Illinois and when it became Caroline’s time to choose, she followed her sister to Champaign.

“The Ratzes as a family are pretty tight, they would think of it as a favorable situation because they are so tight,” Rayfield said.

Rayfield, the second of seven children, sees how thier bond benefits her team.

Soccer has been a big part for the younger members of the Ratz family as well. Katherine and Caroline have a younger sister who played soccer until her senior year of high school and a younger brother Andrew who is a freshman in high school and hopes to play college soccer.

“He loves just watching us and learning. When we come back from college he beats us up,” Katherine said. “He is at that age where he competes with us.”

For the Ratz sisters, family is what has made their experience at Illinois so memorable.

“We get to be with each other 24/7 off the field and on the field,” Caroline said. “We get really competitive and it is a really fun atmosphere.”

“It is also a nice outlet to have someone on your family who knows more than the soccer side of you. I think that helps a lot,” Katherine said. “The best part is being here together and experiencing it.”

What games Illinois will win or lose for the rest of the season is uncertain. But Katherine and Caroline know one thing for sure — that they will have each other to back them up.