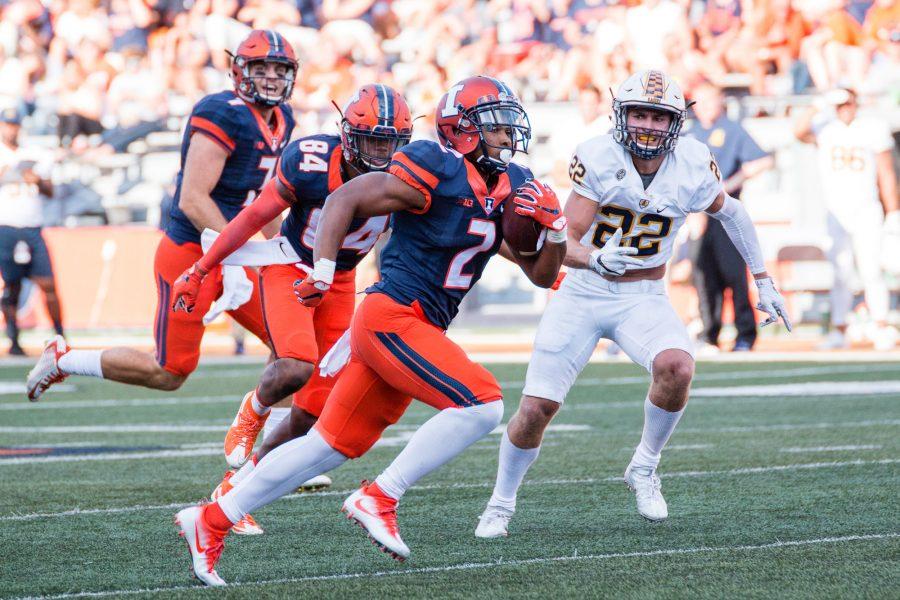 Illinois running back Reggie Corbin (2) runs down the field during the game against Murray State at Memorial Stadium on Saturday, September 3. The Illini won 52-3.

Before the season started, Illinois running backs Ke’Shawn Vaughn, Kendrick Foster and Reggie Corbin sat down to discuss how this year was going to go.

They noticed early that each one had a different skill set to bring to the team.

Vaughn has sheer speed, breaking off on long runs in the blink of an eye.

Corbin does not have the speed to blow by defenders in the open field like Vaughn, or the ability to squeeze between defenders like Foster.

Corbin has something else.

He’s got the sauce.

As a running back, Corbin’s best attribute is his ability to make people miss — something his teammates call having the sauce.

“He has always had (that elusiveness) since he got here,” Foster said. “We all try to bring it to the table, but he is definitely the most elusive.”

Illinois players know the sauce when they see it. They saw it first hand when they watched former Illinois running back Josh Ferguson make defenders miss all last season.

Ferguson, now a running back for the Indianapolis Colts, made a living in college using spin moves and jukes to get past his defenders.

Offensive lineman Joe Spencer has flashbacks to blocking for Ferguson when he is on the field with Corbin.

“Whenever (Corbin) gets into space, it always seems like he can make something happen,” Spencer said. “Some of those spin moves make you check back to see if that was (Corbin) or if it was (Ferguson).”

Corbin, a redshirt freshman, missed last season because he tore his labrum in the middle of training camp.

But it wasn’t a season wasted. Corbin sat on the sidelines all season and watched. He watched Ferguson run for 708 yards over nine games. He watched him make the All-Big Ten third team. He watched him reach second on the University’s all-time rushing yards list. And while he watched, he learned from Ferguson.

“(Ferguson) taught us all so much,” Corbin said. “Everyone in the running back room can tell you. He is like a big brother to us. He is a brother and a coach.”

The similarities between the two players’ games did not go unnoticed by Ferguson, either. He said he saw glimpses of himself in Corbin as soon as Corbin showed up his first day — he was quick, elusive and caught the ball well.

Even though he was sitting out, Corbin left a lasting impression on Ferguson.

“(Corbin) is like a little brother to me,” Ferguson said. “He is a great kid, a hard worker, and he is passionate about the game. I think that was the first thing I noticed about him was that he cares.”

Ferguson took a break from the NFL in early September, and he made the trip back to watch the Illini take on Murray State in their season opener. The Illini blew out the Racers, but Corbin got the opportunity to play in a game for the first time in front of Ferguson.

Corbin did not start against Murray State, but he still got his fair share of touches. He ran for 71 yards on 7 carries and a touchdown. Ferguson said he still saw the same player that he knew last season.

He saw him make cuts, evade defenders and make plays in the open field. He saw the sauce.

In his first career start at Nebraska last weekend, Corbin showed the sauce again by recording 72 yards on nine carries — both were game-highs for the Illini. While averaging eight yards per attempt is nothing to scoff at, Corbin said that he could do much better.

But he has time to get better, with three more seasons after this one. Foster said Corbin will have to get stronger and faster to reach Ferguson’s level, but he thinks Corbin has the potential to live up to the comparison.

Corbin himself, however, holds Ferguson in too high of regard to agree with Foster.

“I don’t think I will ever be as good as Josh,” Corbin said. “Josh is a big brother to me, and he taught me a lot, and I can do nothing but thank him. But to be compared to somebody like him is an honor. He was my favorite running back in college football last year, and he is my favorite NFL running back this year.

“If that is who they are comparing me to, then I am just grateful.”