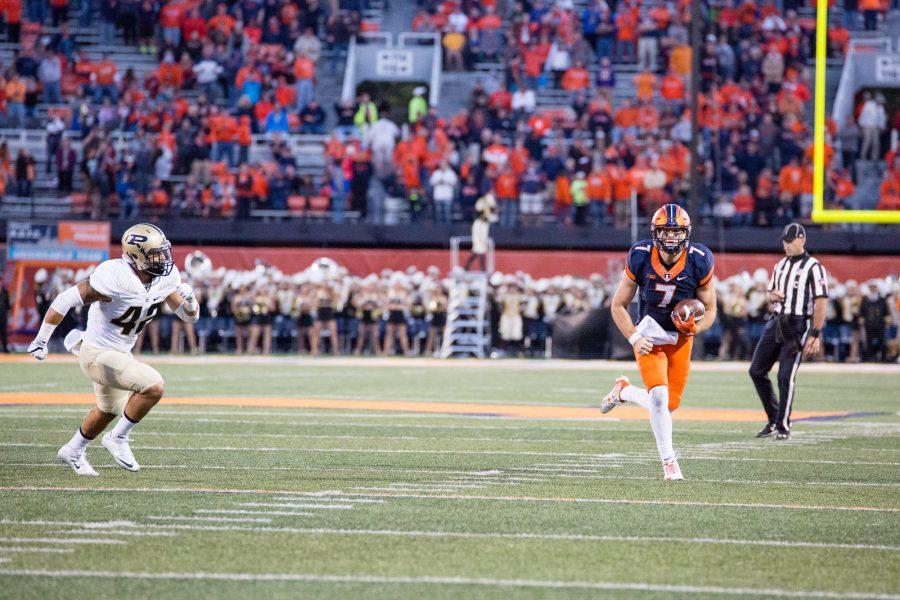 Late in the second quarter, Illinois starting quarterback Wes Lunt took a late hit from a Purdue defensive lineman. He didn’t get up right away, and soon the Illini training staff was on the field checking on him.

All at the same time, the crowd of almost 43,000 people went silent. He walked off the field and later headed to the locker room, never returning to the field.

But six plays later, the crowd got as loud as it had been all game, thanks to backup quarterback Chayce Crouch.

Despite losing to the Boilermakers 34-31 in overtime, Crouch kept the Illini in the game after it seemed like it was over when Lunt went down.

Crouch has a different style than Lunt: He can run the ball, prompting the Illini to switch to a read option offense as soon as Crouch entered the game. The Illini ran the ball on the next 10 plays.

Head coach Lovie Smith said Crouch exceeded all expectations when he took over the game.

“Chayce Crouch was outstanding,” Smith said. “As a backup quarterback, you get some reps, but to come in like that and run the football and keep plays alive was absolutely outstanding.”

Crouch said he has one goal every time he steps on the field: making plays to put his team in the position to win.

When he was in charge of the offense Saturday, the Illini had the opportunity to win the game with a field goal in the last seconds of regulation.

Crouch passed for 142 yards and rushed for 137 yards, which were both game highs for the Illini. He also ran for two touchdowns. But when overtime came around, he committed his first turnover of the game — a fumble on the Boilermaker 10-yard line.

Purdue went on to hit a game winning field goal on the next drive.

“What happened (with the fumble), happened,” offensive lineman Joe Spencer said. “Chayce played his heart out. I couldn’t be prouder of the guy coming in and some of those hits he took and kept his composure, and I applaud him. Heck of a job.”

Crouch took over a running game that dominated Purdue all game. He joined backs Reggie Corbin, Kendrick Foster and Ke’Shawn Vaughn in rushing for 315 yards in the game.

Crouch was not the only one to step up for the Illini, with wide receiver Malik Turner turning in career game for the Illini and acting as a reliable target for Crouch.

Turner had nine receptions for 129 yards — a career high for the junior receiver.

“He gave us life, you know he came in when his number was called,” Turner said. “He stepped up. He made plays. He looked like a regular out there and he stepped up and played a big role.”

But ultimately, Crouch said none of that mattered: It didn’t matter that he turned in a career high game or that  his 137 rushing yards were the fourth most that any Illini quarterback has ever recorded.

He just wanted the win.

“I don’t feel well. We lost the game,” Crouch said. “Anytime you lose, you know you can play better.”