Former soccer player honored for her battle with cancer 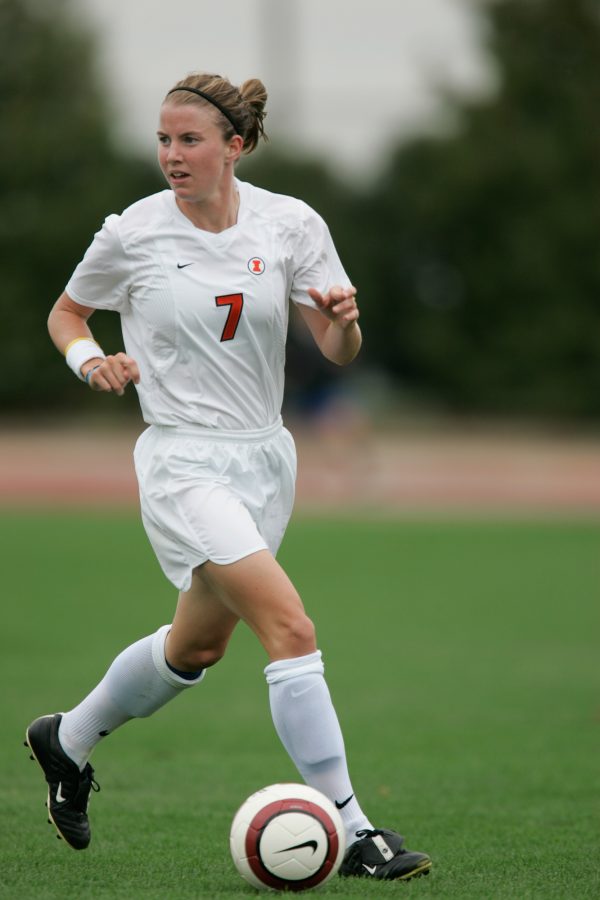 Photo Courtesy of the DIA

In 2005, the Illinois soccer team was in a tight NCAA tournament match against Florida. In double overtime, Christen Karniski made a pass to Laura Redmond. Redmond took a shot from three yards and scored to beat the Gators.

The Illini cheered as they had upset the team hosting the first round of the tournament and would move on to face the No. 2 seed, Florida State.

Illinois head coach Janet Rayfield saw Redmond’s face and saw the joy that came from all the hard work that Redmond had put in as the workhorse midfielder for her team.

After her soccer career ended in 2005, Ramirez, whose former last name was Redmond before her marriage, would have to deal with something bigger than anything she had seen on the pitch.

Ramirez was diagnosed with leukemia in 2007 and is still battling it to this day. In 2010, Ramirez lost her mother to leukemia and her father to liver cancer earlier this year.

It was difficult for her loved ones to see her going through one heartbreak after another. It was especially hard because of the impact she had on other people.

Paula Randall has known Ramirez since high school when they played club soccer together. Later they would go on to play together at Illinois.

“Every time you are around her you want to laugh,” Randall said. “Just her spirit is what people will always remember.”

“It is Laura who always makes us feel better after we chat with her since she has such a great outlook,” Rayfield said. “We call to see if she is okay, but sometimes I feel we are just trying to make ourselves feel okay.”

Throughout her battle with cancer, Ramirez has used humor and lightheartedness to make those around her at ease.

“For myself it’s always been this way,” Ramirez said. “I don’t want to dwell and be sad. Keeping a sense of humor and keeping it lighthearted is my motto.”

Rayfield was someone who got to witness that firsthand. Once Ramirez was diagnosed, Rayfield tried to find any chance to go see her.

After witnessing 11 years of Ramirez go through this battle, Rayfield and the soccer program decided to do something special.

Before the Illinois soccer game Thursday, Rayfield told Ramirez that she would be honored for her struggle for cancer awareness night. What she didn’t tell Ramirez is that they would dedicate an award in her name.

With the assistance of her husband, Ramirez got out of her wheelchair and stood with Rayfield on the center line.

The PA announced the dedication of The Laura Redmond Ramirez Legacy and Inspiration Award, that will be given annually to an Illinois soccer player who exhibits the same traits that Ramirez did during her playing career and her everyday life.

Once she heard the announcement, Ramirez put her hands over her face. Tears rushed down both her and Rayfield’s face, and the two embraced one other.

Rayfield told Ramirez that the whole program loves her and that legacy and inspiration are the perfect words to put on the award that would be in her name.

“Knowing that they have supported me throughout my whole ordeal means so much to me,” Ramirez said. “Getting the award is just really great.”

At halftime, a video played that featured Rayfield describing the battle that Ramirez had gone through. Then another video played featuring current players speaking about the people in their lives that have been impacted by cancer.

Rayfield had been using Ramirez as an example to her current players to teach her players about the legacy they want to leave at Illinois.

“It is very humbling,” Ramirez said. “The (current team’s) girls are very supportive of me. They don’t know me that well, they just know of my legacy. It is such a nice feeling to have.”

For Rayfield, Thursday night felt similar to that NCAA tournament game against Florida 11 years ago. Illinois managed to pull off a major upset against a Michigan team that had not yet lost in the Big Ten.

When Rayfield heard Ramirez’s husband John yell “Let’s go get those Wolverines!” she saw the same competitive spirit in Ramirez’s face as she had after the goal against Florida.

After the game, Ramirez, her husband, former teammates and their children and Rayfield gathered at the large block “I” at the center of the pitch. They had talked about how great the surprise was with the award, how great the game was and took the chance to catch up and reminisce on the good times that they had shared on that field.

At the end of the night, everyone around Laura Ramirez was smiling.