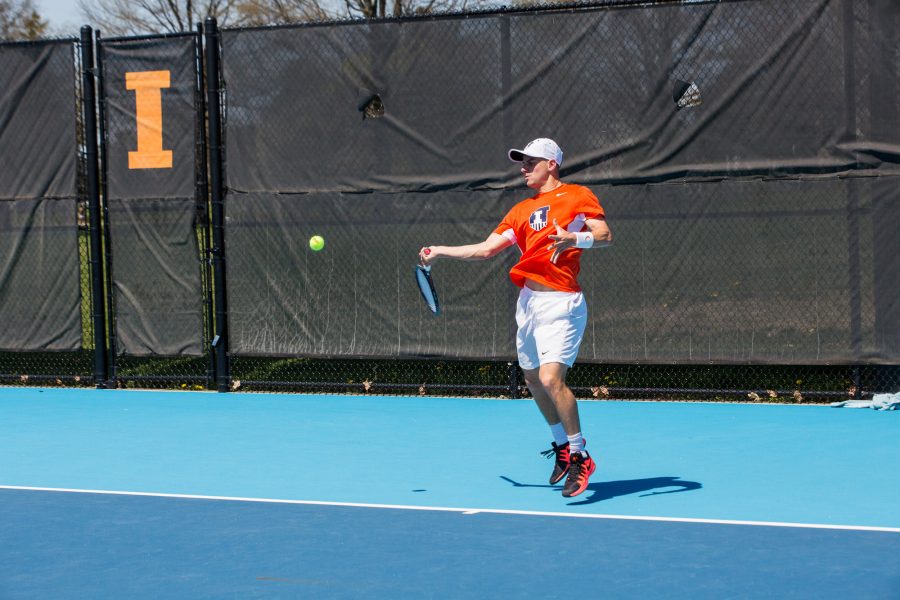 Illinois’ Aron Hiltzik attempts to return the ball during the meet against No. 21 Michigan at the Atkins Tennis Center on April 17, 2016. The Illini won 4-1.

Junior Aron Hiltzik may not have walked away from the Saint Francis Health System ITA All-American Tournament with a singles title, but he did get a chance to prepare for the Texas Tamale Houston Cup at Rice University this week.

Despite not getting as far as last year, associate coach Marcos Asse said he is excited for him to get back into competition this week.

“I think this tournament is another chance,” Asse said. “Tennis is a game of being a loser, and I say that because there is only one guy that wins. How do you balance that and feel like your game is still growing?”

Hiltzik punched a ticket to the second round of the main draw on Oct. 5 when he beat University of Tennessee’s Luis Valero. The next day he fell to Mikael Torpegaard from Ohio State.

“He had a couple of really great practices before the tournament began,” Asse said. “All he really had to do was play his game … Part of him learning his game a little more is him understanding his tools. We felt that it was best for him to get back up on the saddle.”

The Houston Cup will feature a professional-level of competition, including former Illini and Hiltzik’s brother, Jared. Aaron made the trip to Texas in order to improve his player ranking.

“Its professional, so anytime he wins a match it’s a big, big positive,” head coach Brad Dancer said. “He has a chance to improve his ranking while in college. It’s stayed pretty stagnant, but his goal this year is to improve.”

Alongside Aaron, senior Julian Childers also competed Monday in the qualifying round of the ITA tournament. He fell to Timo Stodder from the University of Tennessee in his first match but defeated Diego Vives from Princeton in a consolation match. Five other Illini fell during the pre-qualifying rounds last weekend.

The Illini will host a tournament at the Atkins Tennis Center this Saturday through Monday.