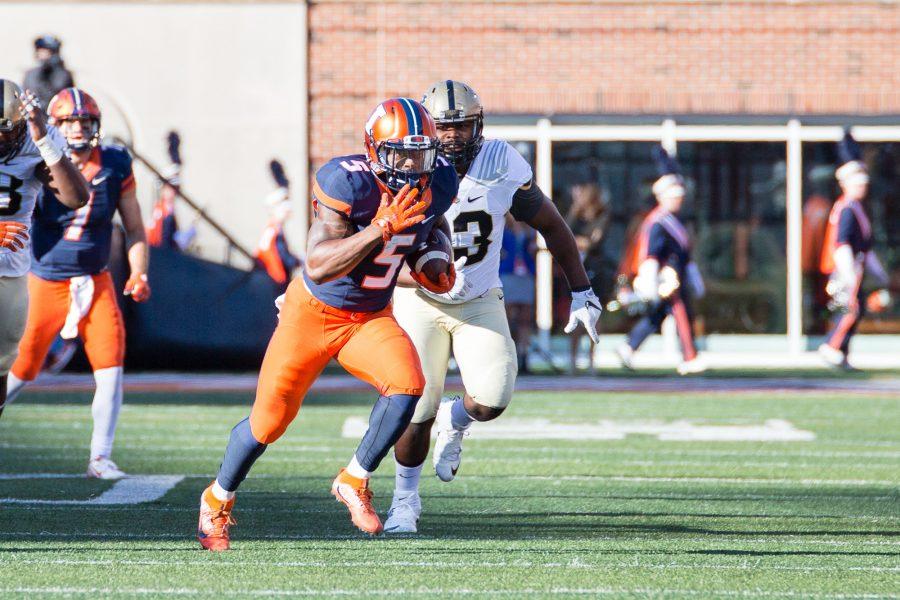 Illinois running back Ke’Shawn Vaughn (5) runs down the field during the game against Purdue at Memorial Stadium on Saturday, October 8. The Illini lost 34-31.

Just three months ago, Ke’Shawn Vaughn was poised to be the long-term face of an Illinois football program in transition.

The sophomore running back was the only non-senior to represent the Illini at Big Ten Media Days and had aspirations of upwards of 20 carries per game. Soon after being hired, head coach Lovie Smith couldn’t keep Vaughn’s name out of his mouth, often throwing around the term “bell cow back’ in the same breath.

But fast forward to Week Five of Smith’s first season in Champaign.

Vaughn still leads the team with 43 carries, but 32 of those touches came in the first two weeks of nonconference play. He’s gotten the ball in the backfield just three times in the past two games.

Although he has out-carried his running mates, Vaughn is third on the team in total rushing yards behind junior Kendrick Foster and red-shirt freshman Reggie Corbin, who has started both of the last two games.

Smith has been adamant that the change of heart in regards to the run game isn’t about what Vaughn has failed to do, but rather what Foster and Corbin have brought to the table.

“You have to be very impressed with every time (Corbin) has touched the ball — him and Kendrick Foster,” Smith said. “With Kendrick, one guy doesn’t normally stop him, he gets yards after contact. Reggie Corbin can just make you miss in the open field. They’re two totally different running backs.”

Corbin didn’t have a carry in Weeks Two or Three but has rushed 20 times for 164 yards over his past two contests. The Maryland native has broken off a 30-yard run in each of the three games he’s seen a carry in this season.

Foster’s role has continued to expand since his 118-yard performance in Week One. His team-leading 16 carries against Purdue marked a career high.

Over the past two weeks, Corbin and Foster have combined for over 41 percent of Illinois’ total offensive output.

“They need to both play and they’re both playing really good football right now,” offensive coordinator Garrick McGee said. “They’re practicing really well and they’re competing really hard, so I think they’re going to continue to share most of the reps.”

All three Illini backs are averaging over five yards per carry.

Vaughn threw his hat back in the running back ring with a 29-yard burst that nearly went for a touchdown. He also fielded his first kick of the season against Nebraska.

“We’re going to need him because he’s another weapon,” McGee said. “We’re constantly trying to find ways to put more explosive kids on the field, so he’s going to be out there in some role.”

With Corbin and Foster now essentially splitting the starting role, neither seems ready to relinquish their fair share of carries.

For Corbin, the trio just keeps him hungry.

“It makes me grind,” Corbin said. “It makes us all work because we know we all want play and we know that we’ll all play — that’s just how it’s always been. “We’re unselfish so that’s the good part about it.”

In the midst of a four-game losing streak, Smith hasn’t found many phases of the game to be happy about. But the young, dynamic tailback combo forming in the Illini backfield has served as one of the lone glimpses of success in recent weeks.

“That’s the one position that I’ve been pretty pleased with what it’s done,” Smith said