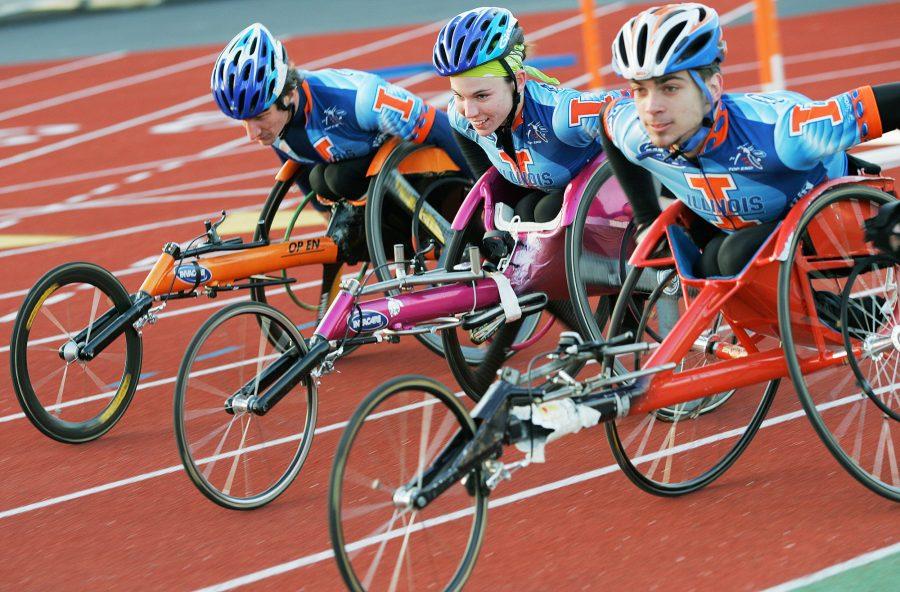 Amanda McGrory, center, who placed second in the women’s wheelchair division of the Boston Marathon on Monday, practices at the Illinois Track Stadium on Monday, April 9, 2007, with teammates Cully Mason, right, and Josh George, left, who placed 10th in the marathon.

On the Illinois wheelchair track team, there’s not much of a difference between coach and para-athlete.

Adam Bleakney has coached the team since 2005 and has competed in two Paralympic Games alongside fellow Illini.

The Rio 2016 Games were his first as just a coach.

“As an athlete, especially at (the Paralympic) level of competition, you have to be inwardly focused and selfish to some degree,” Bleakney said. “You have to be so tuned into yourself, and I couldn’t do that (while doubling as a coach), so I had my butt kicked in Beijing.”

The 2008 Beijing Games were Bleakney’s first both coaching and competing, and he promised himself after the Games he would never compete in the Paralympics again. But four years later, he qualified for the marathon in the London Games.

“I thought, ‘Well, I can do the marathon. It’s after all the competitions, and I won’t have to worry about (the Illinois para-athletes) during the competition,’” he said. “Again, about six miles into the marathon, I said, ‘Why did I ever try to do this again?’

Instead of competing, Bleakney coached the U.S. Wheelchair Track Team in Rio and helped 13 current and former Illinois wheelchair track members win 15 total medals. But Bleakney is not yet done attempting to add to his personal collection of awards.

He raced in the 2016 Chicago Marathon on Oct. 8 and finished in 1 hour and 38 minutes. He placed 16th overall, ahead of 2016 Illinois alumnus Ray Martin, who won two gold medals and one bronze in Rio.

“As much as I love ‘marathoning’ and as much as most of the athletes love it, there’s a certain level of pain associated with that race,” Bleakney said.

Bleakney said some racers become mentally and physically fatigued during marathons. The fatigue often develops into pain after awhile.

Bleakney started wheelchair racing in Iowa. His first major marathon was the 1996 Chicago Marathon at the age of 21. Four years later, he competed in the Sydney Paralympics in Australia

This was the first of four total Paralympics games he competed in. At the 2004 Athens Paralympics, he won silver in the 800 meters.

Now, with a salt-and-pepper-colored buzz cut, Bleakney said that he’s “become more aware of (his) own mortality” as he’s gotten older. His wife, two kids and the Illinois para-athletes are his top priorities.

When he is competing, he also has less of a desire to push himself to win.

“I just settle into a hard, challenge pace in which I don’t keel over and die,” he said with a chuckle. “I’m exaggerating, of course, just for effect.”

Even if Bleakney is no longer finishing on the podium, he still trains with his team. The Illinois wheelchair racers push at the Illinois Track and Field Stadium and around country roads six days a week, totaling at most 20 hours per week.

He also has what he calls his “sacred hour” over lunch during which he runs through his own training exercises.

When asked whether the 2020 Tokyo Paralympics were on his radar, Bleakney was quick to respond with a grin.

“If I make it as a coach, then (the Illinois para-athletes) will travel with me,” he said.