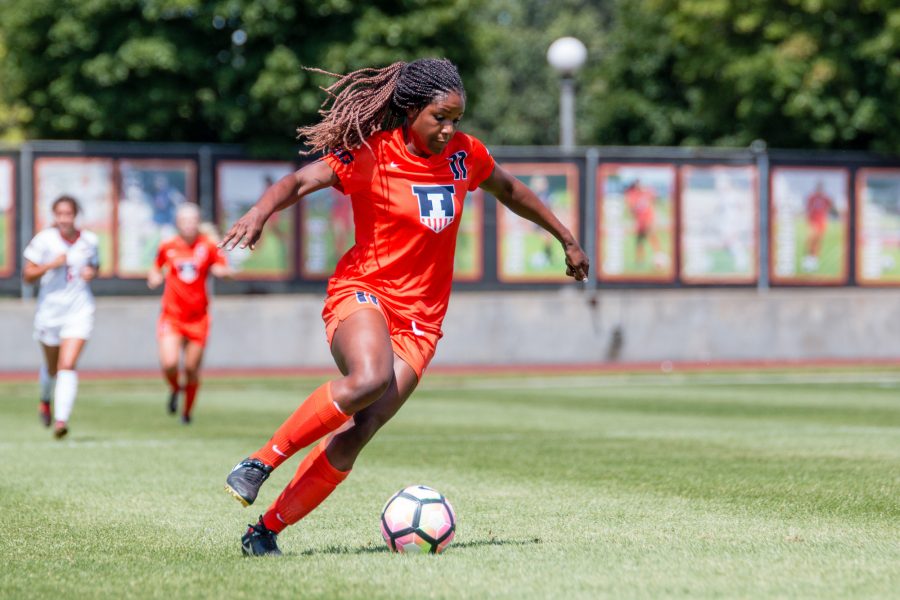 Illinois’ Patricia George dribbles the ball down the field during the game against Illinois State at Illnois Soccer Stadium on Sunday, August 21. The Illini won 1-0.

Quick note: Illinois has a chance to continue its climb through the conference standings against two middling Big Ten teams

Before this weekend, Illinois soccer had only scored eight goals.

But they swept their opponents over the weekend, outscoring Michigan and Michigan State 6-1, and sophomore forward Patricia George was instrumental in that campaign.

Coming off of the momentum from shutting out No. 19 Michigan, George had her breakout against Michigan State, scoring two goals. She is the first Illini to score multiple times in a game this season.

The game reminded George of her time in high school as an all-state player and leader on her team.

George’s offensive explosion is attributed to her increased awareness on the field and hard work.

George’s journey to this point was not easy.

She was a multi-sport athlete at Von Steuben Metropolitan High School in Chicago, playing basketball and running track and cross-country.

In soccer, George’s main experience came from the Chicago Public League. But many of her teammates and peers in the Big Ten participated in club soccer.

George now sees some of the top competition in the nation, and the Big Ten features defending national champion Penn State.

“Freshman year I felt whenever I would get on the field, I would not play confident with the ball,” George said.

George didn’t score her freshman year but competed in 18 games, so she decided to dedicate herself to improving her game.

“The amount of work she put in this spring is really admirable.” Rayfield said. “Her fitness level has gone from someone who didn’t know what to expect to someone who now understands her fitness level.” She has put in the work to be able to play extended minutes and an extended period of time.”

One of the greatest benefits for George was the chance to play with some other solid players at forward. In the past, she has played with some Illinois stalwarts in Nicole Breece, senior Reagan Robishaw, junior Kara Marbury and all-time highest goal scorer Jannelle Flaws.

The last thing George needed to break through was better confidence, and she finally turned that around against Michigan State.

“I was playing scared to make mistakes,” George said.  “Sunday, I decided if I make a mistake, I just keep moving forward.”

“Those words seem minute, but those words keep everyone going,” Marbury said.

The culmination of this success is attributed to George’s personality.

“You’ll see an intensity in her eyes, but at the same time, she can joke with the best of us at times,” Rayfield said. “There is also a laser focus towards the things she wants to accomplish.”

George attributed her chances to score to the return of Marbury, who came back from injury last weekend.

“Kara was a real big impact on the team,” George said. “She presses the defense a lot, more than anyone else on the team, so I feel like that was a big impact we had.”

“You will see a lot more movement like (when she scored her second goal) as she gets more comfortable within the game and making decisions and dictating things,” Rayfield said.