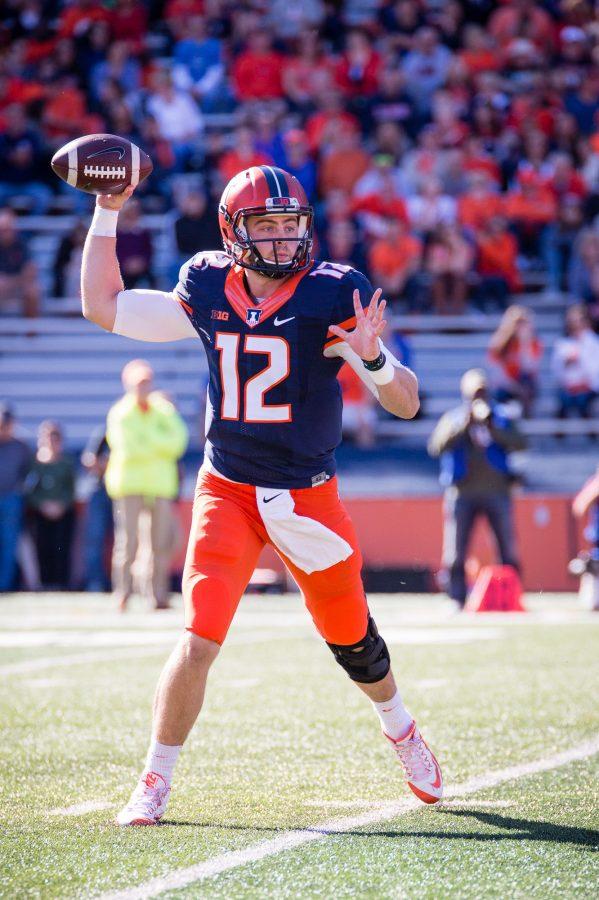 Illinois quarterback Wes Lunt (12) passes the ball during the game against Purdue at Memorial Stadium on Saturday, October 8. The Illini lost 34-31.

Illinois football’s game against Rutgers this week is shaping up to be about as exciting as watching paint dry.

It’s the battle of the Big Ten’s basement teams, the toilet bowl and whatever else you can come up with for a game that decides the conference’s last-place team.

Needless to say, there isn’t a lot of genuine interest in the game, besides from those who are playing in it.

But there will be an interest if the score goes in Rutgers’ favor — Illini fans haven’t been too happy with the finished results of the last few games.

North Carolina and Western Michigan are both good teams.

The Nebraska loss was close and Illinois let the opportunity slip away in the fourth quarter.

Purdue was just another example of Illinois letting momentum slip and not sealing a victory.

The biggest hindrance for the Illini has been penalties on both sides of the ball. From unsportsmanlike conduct to simple mistakes, players haven’t proven to exhibit the discipline they said they have.

When asked about if he was too lax earlier this week, head coach Lovie Smith responded in disbelief with the now infamous emotional “Are you freaking kidding me?”

It’s clear that he is frustrated. Not just by this question, but by the results on the field.

Most fans, at least reasonable ones, realize a coach can’t come into a program and suddenly win 10 games. Those results take time through recruiting and building a program based on one’s own style.

However, most fans likely also didn’t expect to be 1-4 heading into the last game of the first half of the season. I expected the team to be at 3-2 at this point.

With the toughest part of their schedule ahead of them, the Illini needed those early wins. Michigan, Wisconsin, Iowa and Michigan State will not come easy for Illinois as evidenced by years past and those team’s current records.

This week, though many might not want to watch, is an important one for Illinois so it can at least secure a two-win season.

Starting quarterback Wes Lunt has not practiced this week, and Smith has not yet said whether he will be playing Saturday after suffering a back injury against Purdue. Back-up Chayce Crouch gave an impressive performance, minus the overtime fumble.

The Illini need to take advantage of the Scarlet Knights’ negative track instead of tripping over their own blunders of the last two weeks.

Charlotte is a senior in Media.
[email protected]
@charlottecrrll