Illinois prepares to face Rutgers in battle of the beatens 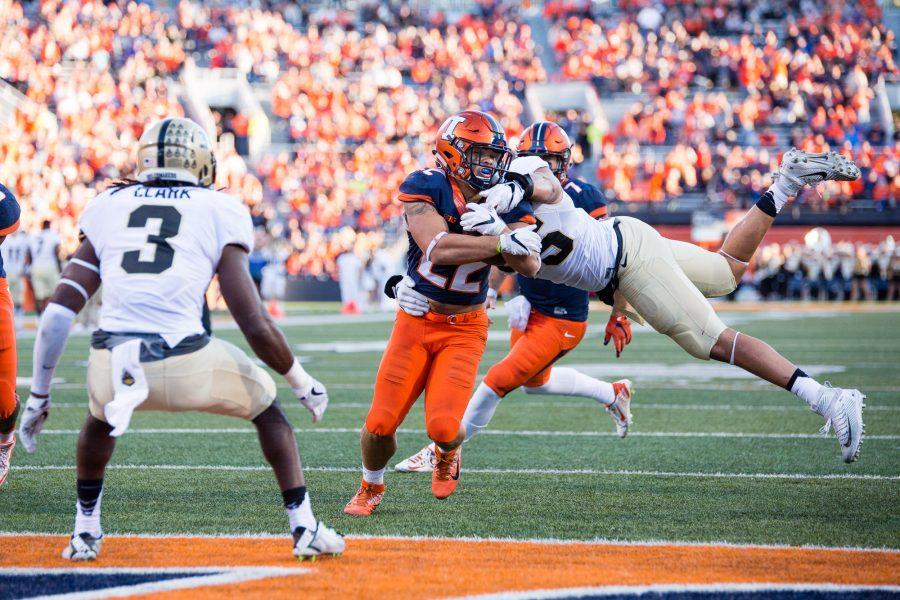 Illinois running back Kendrick Foster (22) runs through a tackle for a touchdown during the game against Purdue at Memorial Stadium on October 8. The Illini lost 34-31.

In its last two games, the Illinois football team has allowed the game to get away.

Illinois had the lead against then No. 15 Nebraska in the fourth quarter, when the Cornhuskers converted on a crucial fourth-and-1 in the Illini’s red zone and the Illini never got it back.

Last week, Purdue topped Illinois in overtime after the Illini missed a field goal with three seconds left in the fourth quarter.

While Rutgers has also lost its past two games, the Scarlet Knights never gave themselves a chance; in their last two games against Ohio State and Michigan, they have lost by a combined 136 points.

The huge deficits over the past two games may look bad, but offensive coordinator Garrick McGee said Rutgers is a lot better than those scores show.

“The issue with Rutgers is that they got beat really bad last week, so you think they are not really good,” McGee said. “But they are a lot more talented than the numbers say. They have big kids, and they are physical in the defensive front.”

Rutgers biggest weakness on defense has been stopping the run game. The Scarlet Knights have allowed roughly 270 rushing yards per game.

The Illini’s trio of running backs – Reggie Corbin, Kendrick Foster and Ke’Shawn Vaughn – have been the Illini offense main threat lately, with head coach Lovie Smith calling the running game the most impressive facet of the Illini’s game so far. He said he expects that they will have another big outing against the Scarlet Knights this weekend.

Last week against Purdue, the Illini running backs ran for 181 yards. As a team they went for 318 yards on the ground with quarterback Chayce Crouch’s 137 rushing yards.

Smith has not announced who will be starting at quarterback. In his weekly Monday press conference, Smith said that Wes Lunt is still the starting quarterback, but it’s unclear if he will be ready to play after leaving the Purdue game with a back injury.

Lunt did not practice on Tuesday, but Smith was not ready to rule him out for Saturday’s game.

The real issue for the Illini this weekend could be their defense.

“(Our defensive line) hasn’t played well enough,” Smith said. “That was our worst game that we have played. When I say it is the strength of our team, it is, but we need better play from it late in the game.”

The Illini have been struggling with giving up big chunk plays on the ground. Smith said that has to change if the Illini want to have a chance of winning not only at Rutgers, but also in the Big Ten in general.

Linebacker Hardy Nickerson said the Illini have a pretty good idea of what to expect from the Rutgers offense. He thinks they will attack in the same ways that the Illini have struggled stopping all season — featuring screen plays that will keep the Illini defense on their heels.

“Each week we learn how hard it is to win a Big Ten game,” Nickerson said. “Two weeks in a row where we have had a chance to win a game, but we haven’t closed it out. We know how hard it is to grind a win out in this league, and we look forward to doing whatever it takes this weekend against Rutgers.”