Illinois football follows through on takeaway philosophy against Rutgers 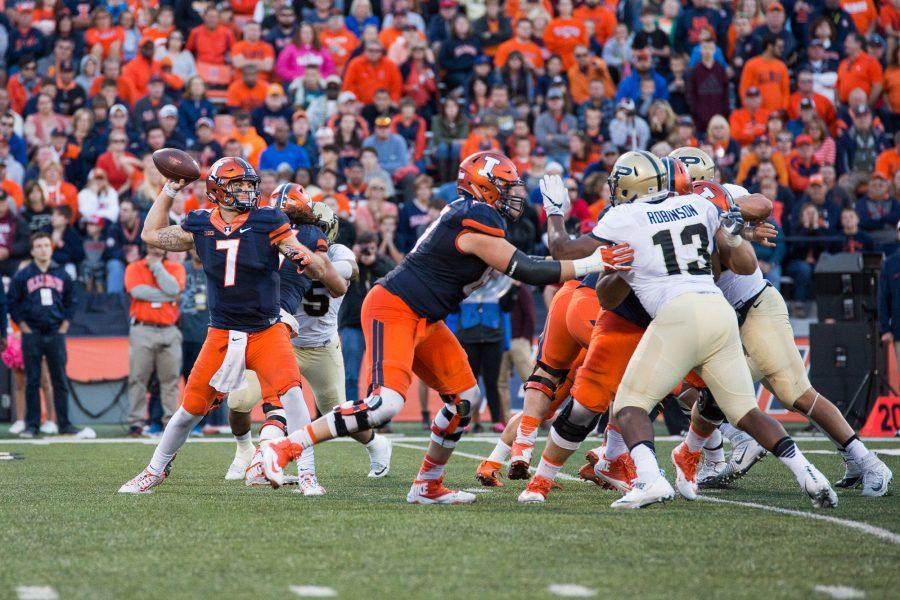 Illinois backup quarterback Chayce Crouch (7) passes the ball during the game against Purdue at Memorial Stadium on Saturday, October 8. The Illini lost 34-31.

Despite the Illinois football team’s defensive philosophy of playing offensively on defense, the Illini have been struggling to create turnovers in the first five games of the season.

That changed against Rutgers on Saturday.

The Illini forced the Scarlet Knights to commit seven turnovers – four fumbles, one interception and two turnovers on downs.

“We talk about a lot of different areas that tell whether you win or lose,” head coach Lovie Smith said. “Turnover ratio through the time that I have been a coach has been one that sticks out each week. To get that many takeaways should say win, which it did.”

Before the game against Rutgers, the Illini had only recovered three fumbles all season. Defensive linemen Dawuane Smoot and Jamal Milan, and linebacker Tre Watson all forced Rutgers into fumbles, with Milan forcing two.

The Illini forced five turnovers by the latter half of the fourth quarter, but Rutgers was not going away. The score was 17-7 as the Scarlet Knights drove down the field, trying to put even more pressure on the Illini.

That is when defensive back Darius Mosely made the play of the game, intercepting a pass from Rutgers quarterback Giovanni Rescigno and returned it 78 yards for the touchdown.

Smith praised both Milan and Mosely at Monday’s press conference.

“Darius Mosely on the defensive side was outstanding,” Smith said. “Of course he had the touchdown and the recovered fumble, but he had a couple other big stops, too. I really liked what he did for the first time starting at the nickel position.

Mosely’s pick-six put the Illini up by 17 points with a little over nine minutes left in the game. Then on the next drive, Milan forced his second fumble.

“Jamal Milan also played well on the defensive side of the football.”

Those two drives killed all momentum for Rutgers and helped win the game for the Illini.

But quarterback Chayce Crouch said the game probably shouldn’t have been that close in the first place. The Illini only scored following two of Rutgers’ turnovers – once with a receiving touchdown from running back Kendrick Foster, and the other with a field goal from kicker Chase McLaughlin.

“Whenever the defense puts the ball in our hands, which they did a lot this weekend, we need to put it in the end zone,” Crouch said. “If we would’ve scored on every one of them I would have said we did a good job of it, but we didn’t so we didn’t do a good job.”

One less coach on the sidelines

The Illinois football team had one less coach on the sideline for the third straight Saturday.
Defensive coordinator Hardy Nickerson spent the last three games – Nebraska, Purdue and now Rutgers – in the coach’s box. He made the move so he could see the game from a higher angle and see where to best make his mid-game adjustments.

“You get to see the whole picture,” Nickerson said. “On the field, you get a view of what is nearest to you, as opposed to being upstairs you can see it all. I have been just going up there to what it is like, because I have always been down on the field.”

Nickerson started going up to the box to kind of shake things up for the Illini. He said right now it is a week to week thing, but so far it seems to be working, so he will keep doing it.

The Illini defense seemed to profit from the change. Rutgers recorded 385 total yards on the day, but only recorded seven points, and committed seven turnovers.

It was the lowest point total the Illini had given up since week one against Murray State.

But Nickerson is not able to talk to his players face to face as soon as they come off the field. While he misses that aspect of coaching, he said it is worth it if it is helping his defense play better.
The change of scenery for defensive coordinator Nickerson does not phase the players on the field.

Whenever Nickerson spots something on the field that needs to be changed, he just phones down to the field and tells the players.

One of the players he talks to the most when he calls down is team captain and his son, linebacker Hardy Nickerson.

“It doesn’t faze me,” the linebacker said. “I have had coordinators on the field and in the booth. It is just whatever the coordinator feels will give us the best chance to win.”