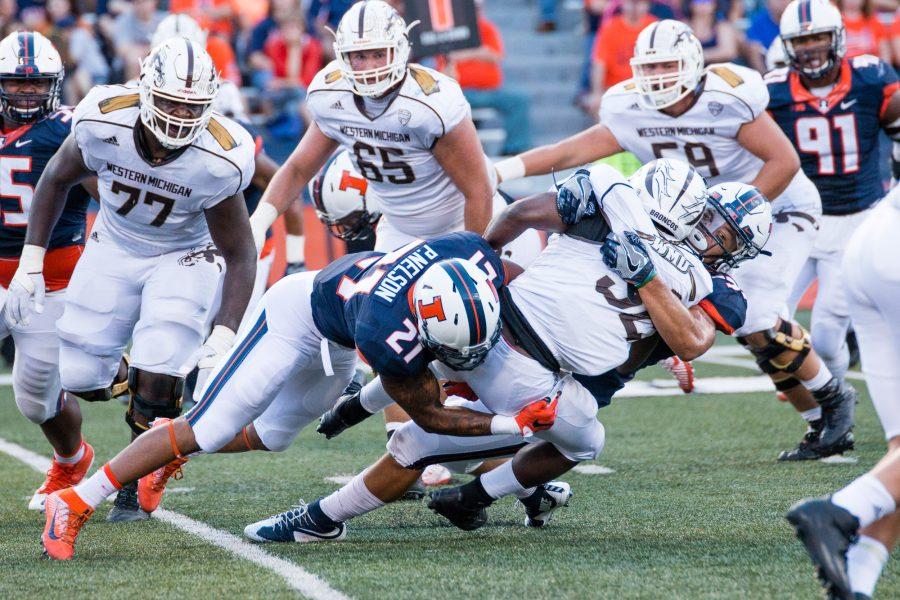 Western Michigan running back Jamauri Bogan (32) gets tackled by Illinois defensive back Patrick Nelson (21) and linebacker Tre Watson (33) during the the game against Western Michigan at Memorial Stadium on Saturday, September 17, 2016. The Illini lost 34-10.

Patrick Nelson doesn’t talk much. But he tackles, and he tackles hard.

The redshirt freshman safety didn’t get an opportunity to show just how hard he can hit until Week Three, but he made a quick impression once he saw the chance to roam Illinois’ secondary against Western Michigan.

Nelson also tackles in bunches. Since Week Three, he’s racked up 42 total tackles, and after making his first career start against Nebraska, he’s seemed to lock down the starting strong safety spot for the remainder of the season.

Since that game, his 12 tackles per contest is tied for the Big Ten lead.

He was all over the field in Saturday’s win against Rutgers, piling up a game-high 14 tackles, 1.5 tackles for loss and half a sack. The performance resulted in Big Ten Freshman of the Week honors for Nelson, who is the first Illini to earn the accolade since running back Ke’Shawn Vaughn last season.

Smith and the Illini coaching staff have been willing to rotate players in and out of the defensive formations, and Nelson was one of the first lineup curveballs that Smith threw in Week Four. The Chicago native responded with 16 tackles right off the bat.

“We’re looking for the best fit and the players that are making the most plays,” Smith said. “Patrick Nelson has come in at the safety position, made a lot of tackles and given us good physical play.”

Nelson is hard-hitter on the field and a learner off the field.

Although he wasn’t recruited by Smith, Nelson has latched onto his new head coach. He regularly has private meetings with Smith and defensive coordinator Hardy Nickerson in order to remain on the same page week in and week out.

“Especially with me being a Chicago kid, I knew about Lovie Smith with the Bears,” Nelson said. “It was just exciting, and it’s still exciting because he knows so much, so he teaches me a lot.”

Nelson has taken full advantage of all that he can learn from Illinois’ highly experienced coaching staff, but he also continues to squeeze every possible ounce of knowledge out of the veteran players surrounding him. Senior safety Taylor Barton has seen his playing time decrease in lieu of Nelson’s emergence but serves as a mentor no less.

Nelson said what he’s been able to learn from the coaches and his teammates have gone hand-in-hand.

Senior linebacker Hardy Nickerson is another veteran presence that has made Nelson’s transition easier, especially on the field.

While Nickerson remains the Big Ten’s leading tackler in the season, having Nelson serve as a security blanket behind him has taken some of the playmaking pressure off his shoulders.

“I love playing with him,” Nickerson said. “I definitely have a lot of confidence in him, and he’s just getting better each week. He’s made so many jumps understanding his job and understanding the defense and getting it done.”

Nelson is one half of a safety tandem that has suddenly become one of the youngest in the Big Ten. Freshman Stanley Greene made his first career start against Rutgers as Illinois’ free safety and tallied five tackles and a fumble recovery. His first career defensive snaps came the week prior against Purdue.

Smith said the recent changes aren’t necessarily part of a focused youth movement, but rather because of what guys like Nelson and Green have shown in practice. Nevertheless, the continued development of the new faces in the Illini secondary bodes well for the future of the program.

“We have a lot to build on,” Smith said.