Illinois football heads to the Big House to face No. 3 Michigan 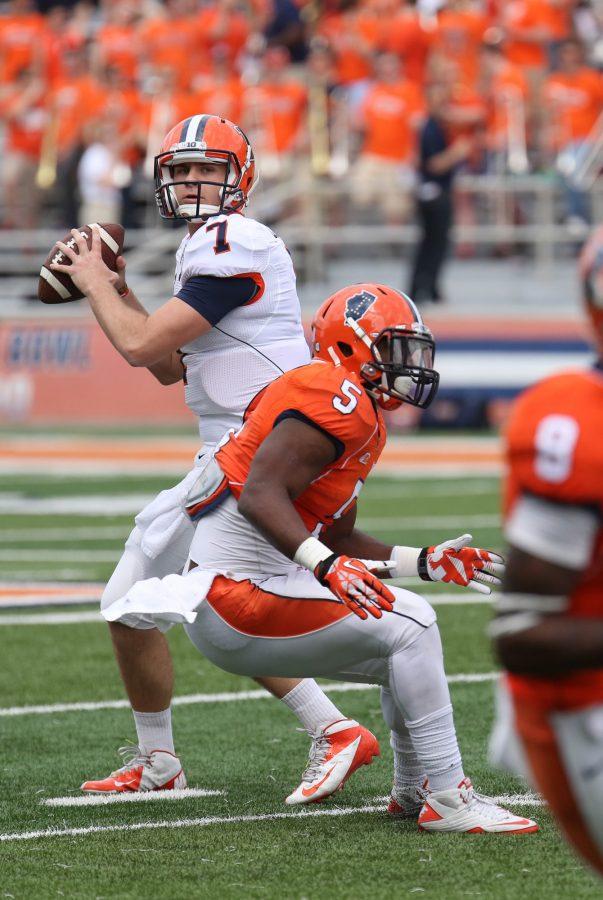 Illinois’ Chayce Crouch (7) winds up for a pass during the annual Orange and Blue Spring Game at Memorial Stadium, on Saturday, April 13, 2014. The Blue team won 38-7.

Lovie Smith has seen what the bottom tier of the Big Ten has to offer in the past two weeks.

Now it’s time for the first-year head coach to face the conference’s elite.

The Illini will travel to the Big House in Ann Arbor, Michigan, for the first time since 2012 for Saturday’s contest against the Wolverines. It will mark Illinois’ first encounter with Jim Harbaugh, who has led No. 3 Michigan’s ascension to the top of the NCAA since returning to his alma mater in 2015.

Over 110,000 students expected to pack Michigan Stadium for the school’s homecoming weekend.

“We’re playing one of the best teams in the country at their place,” Smith said. “We’ve been a homecoming team quite a bit this year but we’re looking forward to that challenge ahead of us.”

In his short time in the Big Ten, Harbaugh has had a huge effect on recruiting and the program’s overall success. Smith’s tenure has started off much slower, and when comparing the two teams’ achievements this season, the differences are rather eye-popping.

Michigan is first in the Big Ten in points per game and second in total offense. Illinois is 10th and 12th, respectively.

On defense, the Wolverines have allowed the fewest yards in the Big Ten at 212.8 yards per game — the next best defense has allowed 280.5 yards per game. Harbaugh’s squad also leads the conference in sacks and rushing defense — the Illini don’t rank higher than 7th in any of those given categories.

On a national level, Michigan remains dominant, especially in areas where Illinois has struggled the most.

Michigan is tied for 12th in fewest penalties per game. Illinois is 123rd out of 128 schools with 8.67 yellow flags per contest.

Michigan leads the nation in third down conversion defense, and it’s not even close. Their collective opponents have converted 10 of 82 third down attempts for a .122 success rate — the next best is .198. That doesn’t bode well for Illinois’ ability to stay on the field, as it ranks 120th in the nation with a .311 third down success rate.

And although the Illini run game has found life in the past few weeks, the Wolverines boast a tough front seven that have held their opponents to the ninth-fewest yards on the ground in the nation.

Those statistical discrepancies and Michigan’s single-digit ranking don’t scare the Illini, though.

“That alone gets the team going,” junior running back Kendrick Foster said. “Why wouldn’t you want to display your talent at the Big House on a big stage? We do believe in ourselves, we just have to have everybody believe in that. Once everybody does, man, sky’s the limit.”

Both teams are coming off wins against Rutgers. Illinois’s had a sloppy 24-7 win last Saturday, and Michigan a 78-0 pounding the week before, followed by their bye week.

With sophomore quarterback Chayce Crouch making his first career start against the Scarlet Knights, the Illini relied heavily on their run game, which has combined for 543 yards over the past two weeks.

That may be hard to maintain against guys like Jabrill Peppers and Ben Gedeon, who have combined for 15 tackles for loss this season.

Senior quarterback Wes Lunt, who injured his back against Purdue, practiced in full pads this week. Smith didn’t declare a starter for Saturday.

“We’re looking forward to the challenge,” Foster said. “We’re competitors, that’s why we signed up for this.”