What could make a successful game for Illini football at Michigan? 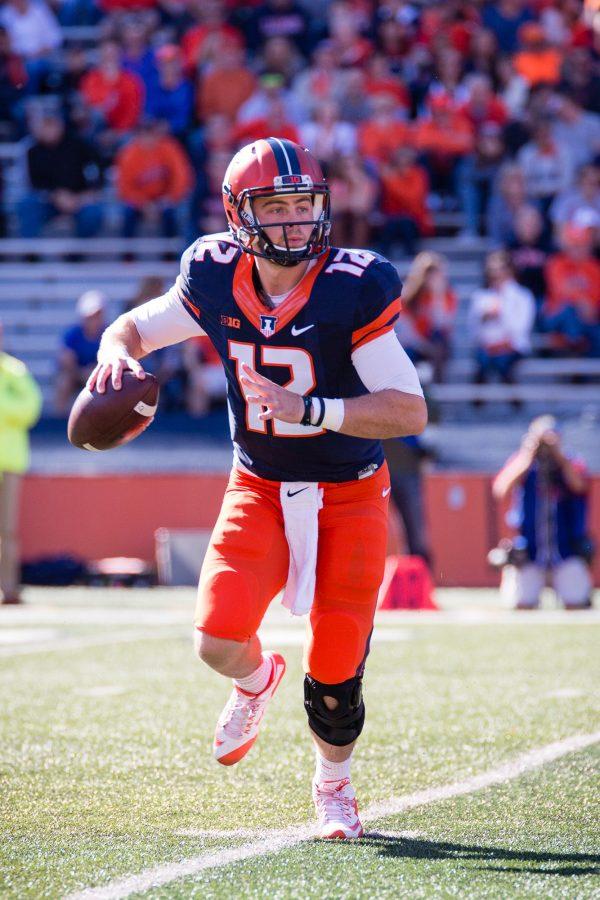 Illinois quarterback Wes Lunt (12) scrambles out of the pocket during the game against Purdue at Memorial Stadium on Saturday, October 8. The Illini lost 34-31.

That’s what Las Vegas has to say about this struggling, transitioning and beat-up Illinois football team as it takes on one of the nation’s giants.

Considering the powerhouse that Michigan is, Illinois has a fat chance at making this a respectable game. So, realizing the scoreboard will be far from close, what are some possible takeaways for the Illini this week?

Here are five silver linings Illini fans should want to see in this football game.

Development from the quarterback

If Wes Lunt is able to go, a solid performance from No. 12 is critical.

Many are calling on Chayce Crouch to be the new starter despite his shaky passing performance against Rutgers. Folks are chalking that up to an apparent shoulder injury, but the quarterback said that wasn’t the case in Monday’s presser — if you’re an Illini fan, that’s not what you wanted to hear.

If that’s really Crouch’s arm, it becomes more difficult to picture Crouch leading this offense in the future. He completed just six of 14 passes for 92 yards, which amounted to a whopping 12.7 QB-rating against an abysmal Rutgers’ defense.

Lunt needs to prove that this should be his job. He still has the confidence from his coaching staff, but sometimes earning the respect of the fans is just as important. If he can confidently lead this offense, help them to move the chains and put his team on the scoreboard a couple of times, that would be a big step in the right direction for Lunt.

Continued success from the running game

The running backs have been the brightest spot on Garrick McGee’s offense. The three-headed attack of Reggie Corbin, Kendrick Foster and Ke’Shawn Vaughn have been very effective this season — and now the Illini are tied for third in the Big Ten in yards per carry.

That being said, they’ve gone up against the two worst rushing defenses in the conference the last two weeks. They’ll face the Big Ten’s best Saturday; a well-rested Wolverines defense after their bye week that allows just 2.9 yards per carry and less than 100 yards a game on the ground.

Corbin, a redshirt freshman, and Vaughn, a sophomore, are going to continue to be a crucial part of this offense for the next couple of years. If they can keep it up on the ground against this formidable defense, that would be very promising for this team.

Considering they’ll likely get walloped on the scoreboard, it would certainly be a success for Lovie’s team if it can come back to Champaign completely healthy. I hate to mention it, but it’s something that you have to think about in any game.

Secondly, as the Big Ten’s most penalized team, Illini fans should consider it a small victory if they don’t see too much yellow laundry on the field. Lovie keeps telling us that his football team is more disciplined than we’ve seen on the field. Well, it’s about time the Illini proved it.

Hold onto the ball and take it away

Lovie Smith prides his football team in taking the ball away on defense and holding onto it on offense.

We’re starting to see the fruits of Lovie’s labor. After the Illini took the ball away five times against Rutgers, they’re now plus-8 in turnover differential, which is good for fourth in the nation. Let’s see if they can maintain ball security against a Michigan team that’s taken the football away 10 times this season.

The taller task will be creating a turnover on defense. Michigan’s offense has only given the ball up on four occasions this season. A takeaway for the Illini defense would be encouraging for Illini football fans.

Hang around for a while

The Wolverines have made a habit of blowing teams out — shellacking Rutgers, Penn State, UCF and Hawaii already this season.

It’d be nice to not join the list of teams that Michigan has beaten by more than 35 points. But how the heck do you actually do that?

In order to play a respectable game, it comes down to the aforementioned things: maintain ball security and have success on the ground game. If they can keep this to a two or three possession game for most of the way, I think that would be an honorable performance.

Can they? We’ll see.

Kevin is a junior in [email protected]
@KevOMcCarthy