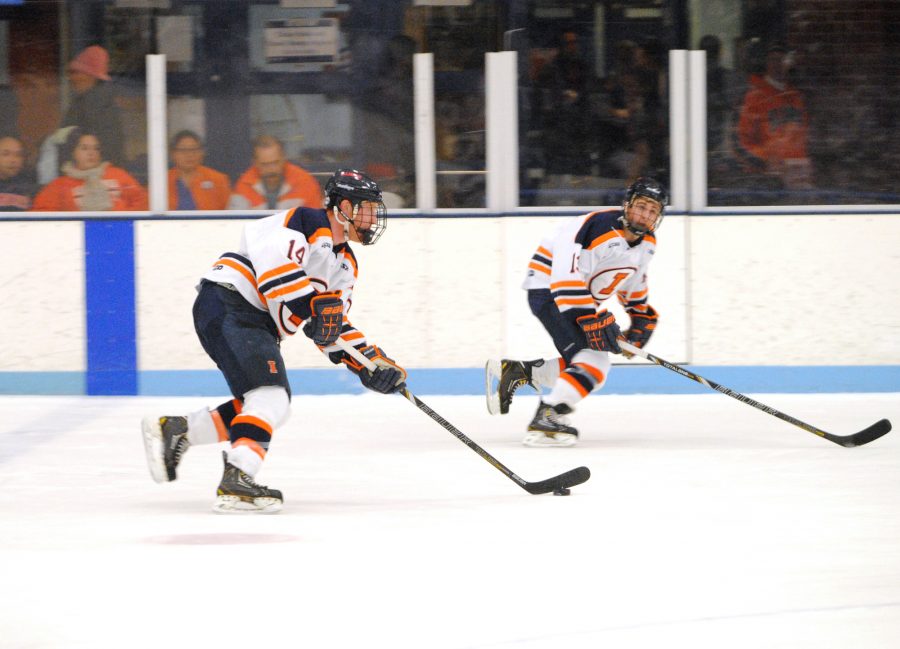 Forward John Scully (14) skates with the puck during a breakaway during Friday’s game against the Ohio Bobcats at the Ice Arena.

After starting the season undefeated, Illinois hockey dropped a weekend set to the University of Michigan-Dearborn.

Illinois opened its season with seven straight wins, taking down rival Illinois State, and conference foe Michigan State. Outscoring opponents 41-14 and never surrendering more than two goals in a game, the Illini looked dominant early on versus both Division I and II opponents.

Coming off its defeat to Indiana State, the team headed out early in the morning for its weekend series against Michigan-Dearborn.

Head coach Nick Fabbrini knew that his squad would be tested on the ice, acknowledging before the weekend that the Wolverines may be the most complete team his players have seen all year.

“I know (Dearborn) is a good team,” Fabbrini said. “They’re probably going to be the best team we have played so far this year, so we’re going to have to be ready and play better than we have to this point.”

Illinois’ first game proved to be the closer of the two, with the Illini surrendering a 4-2 lead in the third period, eventually losing, 6-4. The Wolverines’ win ended a four-game losing streak for the team that had not picked up a win since Oct. 1. Michigan-Dearborn point leader Tyler Groat added a hat-trick to his season.

In the second game of the series, the Illini did not get on the board until late in the third period, losing the finale, 4-1. Illinois mustered 38 shots on goal but could not get more than one past Wolverines’ goalie Nathan Ferris.

The Illini will return home to take on Iowa State this Friday and Saturday. The Cyclones are 7-1 this season.