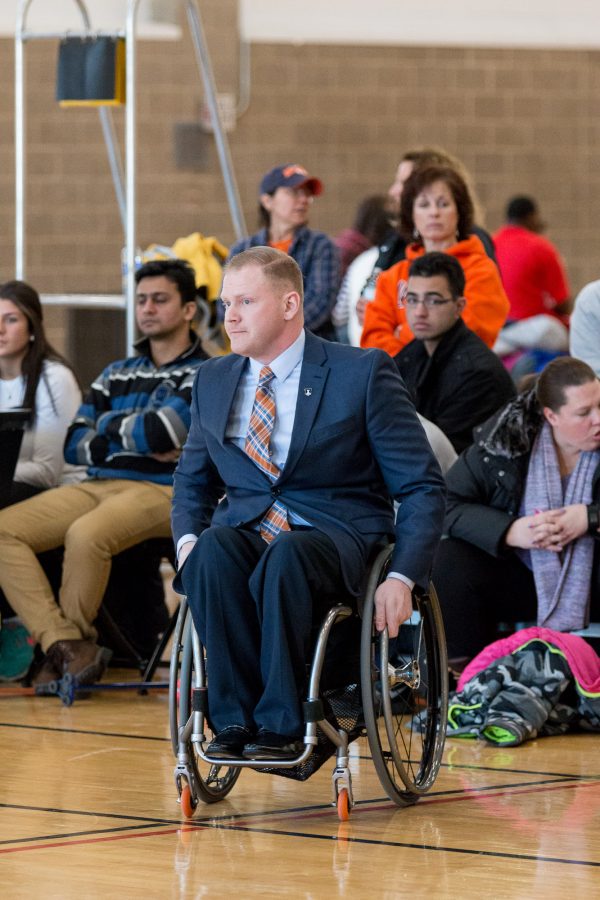 Illinois head coach Matt Buchi watches his team during the game against Arizona State University at the Activities and Recreation Center on February 13. The Illini won 69-43.

The Illinois men’s wheelchair basketball team is in a unique situation.

Poor shooting was an issue in the team’s 1-3 outing at Southwestern Minnesota State on Oct. 21 and 22. The team averaged a 38.2 shooting percent and 52.2 free throw percentage over four games in Marshal, Minnesota. The Illini overshot the ball several times after hitting the backboard or the back of the rim.

“It’s obvious that our strength and conditioning program that we added has drastically improved overall strength,” Buchi said. “Almost to the point where it’s now affecting our shots.”

The Illini started a new workout regimen this year with Jen Dysterheft coming to Illinois as a grad student. Dysterheft has worked with the United States’ Paralympics as a fitness instructor and is now serving in a similar role at Illinois.

Dysterheft helps organize the different workout sessions for the Illinois wheelchair basketball teams. The newest drills include “super sets,” or reps with little breaks in between sets.

Dysterheft also schedules different routines throughout the season — from building strength at the beginning of the season to maintaining it toward the playoffs.

Buchi said the new routines are more game-like than the workouts from previous seasons in which the players would take 30-second breaks in between sets of reps.

Senior Ryan Neiswender said he didn’t think the new workout routines affected the team’s outcome at Southwestern. Instead, he said he felt it was the team’s poor transition defense and lack of communication.

“We just need to put together 40 minutes of great basketball,” the team’s leader Neiswender, who averaged a team-high of 21 points per game, said. “This weekend, we did about 20 in each game, and unfortunately, that’s not going to cut it at the high level of competition were playing.”

Either way, Buchi said his team will focus on getting in more shooting reps in practice. He said he does not plan to change the team’s workout schedule.

Although some players were mum after the game, Buchi and Neiwswender said the expectations should rise as the season progresses.

“The guys are hungry,” Neiswender said. “We have a veteran group with a lot seniors, and this weekend was not how we wanted to start the season. I think it was a great eye-opening experience to realize that this is the last year for our guys to bring home the championship.”