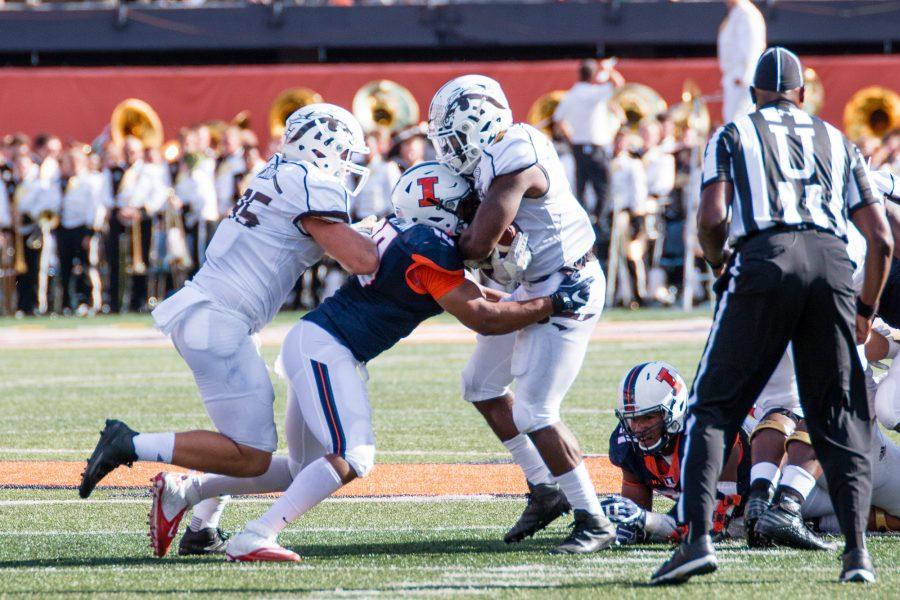 Malik Turner had a career game against Minnesota last season.

He caught 11 passes for 126 yards and one touchdown. Those 11 receptions remain a career-high for the junior, but those numbers are not the first thing he remembers when he thinks back on that game.

“I only remember losing,” he said.

The Illini fell to the Gophers 32-23 last November, and Turner has not forgotten. He’ll get his shot at payback this weekend when the Gophers come to Memorial Stadium on Saturday.

While most of his team has seen this Minnesota (5-2, 2-2 Big Ten) team before, head coach Lovie Smith said he has been impressed with them.

“They play good football; defensively they play hard,” Smith said. “That is the first thing you notice, is how hard a team plays. They do. They don’t do a lot of different things, but what they do do, they do well. Offensively, it is a combination of some of the offenses we have played before.”

After a two-week road stint, the Illini (2-5, 1-3 Big Ten) return to Champaign after a bad loss to Michigan at the Big House. The Michigan defense shut down quarterback Jeff George Jr. in his first career start.

George only completed four passes out of 15 attempts and threw for one touchdown in the game. Turner caught two of the passes and the touchdown from George. Smith said that George’s play was expected, but if George is called on to start the game against Minnesota, Smith thinks he will have a better performance.

“I think traditionally yes, you get (a better second start),” Smith said. “You have to have a first game, but you can only prepare them only so far. But when you get out in the game you learn an awful lot about how life is under center.”

Smith has not revealed who will start Saturday, but he said during Monday’s press conference that his staff had a good idea of which quarterbacks he would have available on Saturday.

While the Illini are hindered at quarterback, the team’s trio of running backs are ready for Homecoming. Ke’Shawn Vaughn, Reggie Corbin and Kendrick Foster are averaging 5.2, 8.4 and 6.1 yards per carry respectively on a combined 160 rushing attempts.

They will go up against a Minnesota defensive line that is allowing 135.9 rushing yards per game.

On the opposite side of the ball, the Illini defense will have to contain running back Rodney Smith. The sophomore is Minnesota’s leading rusher, averaging 100 rushing yards per game, and scoring eight touchdowns in the process.

The Illini defense will have to deal with Davis without linebacker Tre Watson in the first half. Watson was ejected from the game against Michigan in the second half because of a targeting penalty, and will have to sit out the first half of the Minnesota game before being allowed back on the field.

“Tre has been one of those guys that we have locked in with,” Smith said. “But when you break the rules that is what happens. You get penalized. It’s not like it was in dispute with that call. Those penalties do hurt you and they do have a lasting effect.”

Smith is treating Watson’s first-half suspension like an injury and embracing a next man up mentality to fill in for Watson.

His ultimate goal is to have his team play well for the homecoming crowd.

“We have a lot of people who really love our University, and part of them having a successful homecoming weekend is how their football team performs.”