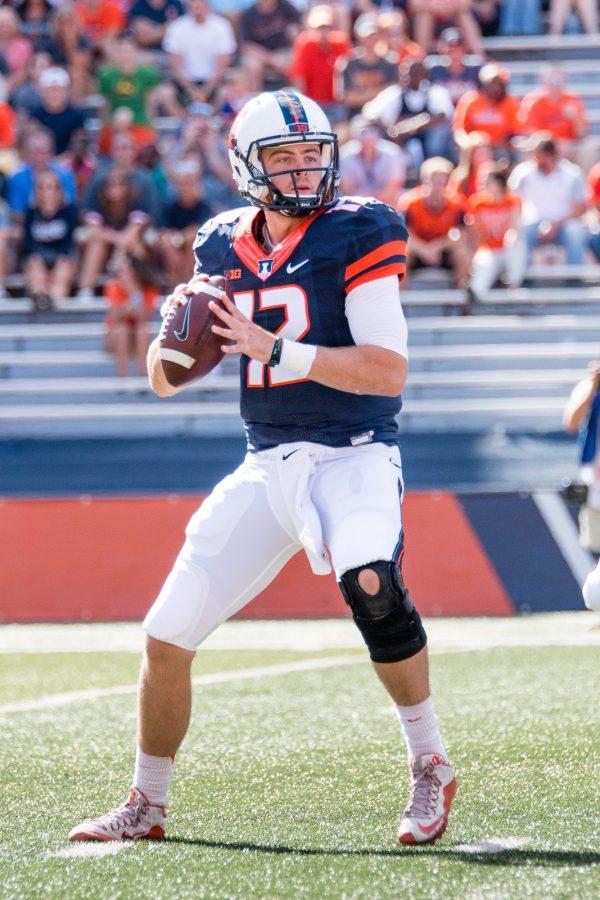 Illinois quarterback Wes Lunt (12) looks to pass the ball during the first half of the game against Western Michigan at Memorial Stadium on Saturday, September 17. The Illini are losing 24-7 at half.

Saturday’s game will be the first game under head coach Lovie Smith that many Illinois alums see in-person.

To some alums that I’ve talked with, Smith represents a shift: an illustrious NFL savior sent by the Whitman gods to right the Illini’s terrible football ship.

The big draw of the annual weekend is the football game. It’s the tailgate, the crisp fall breeze, leaves falling, a burger and a beer (or more).

In his weekly press conference, Smith said that for some alums, part of having a successful Homecoming weekend is how the team performs.

While that’s true for alumni, for students it’s just another game this season. Maybe a win, but most are likely thinking it will just be another loss.

At this point, the game –is the furthest thing from most of students’ minds.

It’s “Halloweekend.” Then, there’s the minor detail that the Chicago Cubs are in the World Series for the first time in 71 years in case anyone has been living under a rock.

To alums, it’s a chance to come back and relive their college days and, honestly, probably watch a team that was similarly terrible to when they were here.

Smith views this game as winnable, and it probably is.

By the wonderful who-beat-who logic, Minnesota barely escaped the Big Ten’s last place Rutgers last weekend in a 34-32 win. Illinois beat Rutgers in a 24-7 victory on the road. By that math, the Illini should come away with a win.

But I was never very good at math, and these are the Illini, so Saturday is really a tossup.

Saturday’s result will depend on the starting quarterback. If redshirt freshman Jeff George Jr. is in the pocket in place of Wes Lunt or Chayce Crouch, expect a much closer score. Smith has kept his trademark injury silence going, so Lunt and Crouch’s status is unknown.

After a shaky start at The Big House, he’ll definitely be more comfortable this week at home if he starts, and another Big Ten victory doesn’t seem implausible.

The offense as a whole was extremely shaky and lacked cohesiveness. It will be interesting to see how another week helps this unit if George is the starter again.

As a whole, the Illini should perform better against a team that isn’t No. 2 in the country.

So, enjoy the game. If the Illini perform to par, there shouldn’t be a problem beating the Gophers.

But as a whole, enjoy the weekend spending time with family and friends even more.

Charlotte is a senior in Media
[email protected]