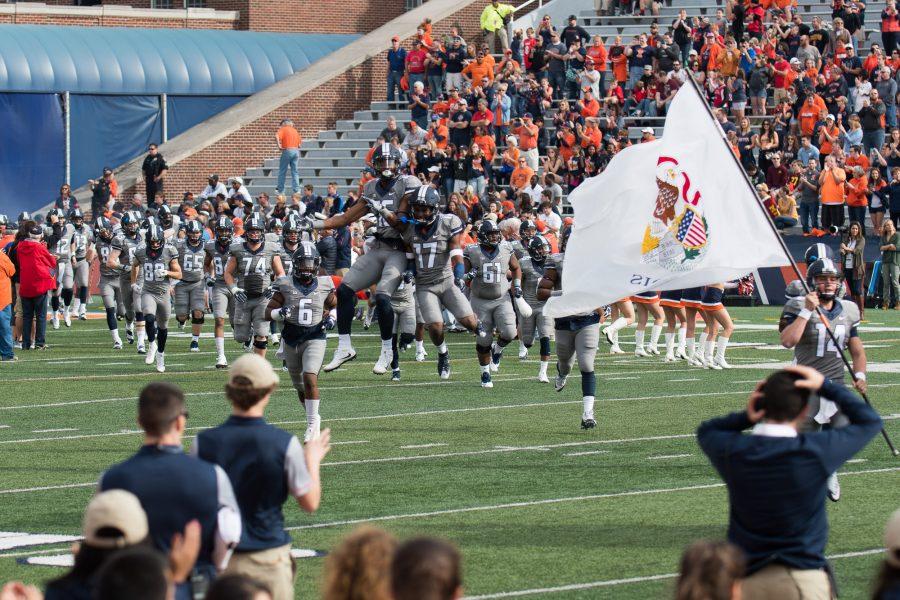 Players run out onto the field and the start of the game.

For the past few weeks, Stanley Green and Patrick Nelson have gone through the same post-game routine.

They clean up, hydrate and talk.

Illinois football’s two freshmen safeties talk about what went right, what went wrong and how they can improve. They’ve risen through the ranks of the Illini secondary together, and while their individual skills are growing from week to week, so is their bond.

“We’ve got good communication,” Green said. “We’re pretty close, and we’re just getting better. We both go out there every week and come back talking to each other about what we saw and how we can get better. What we’re doing could have a big impact in the future.”

The young safety tandem combined for 15 tackles in the loss to Minnesota on Saturday. Green led the team with nine to become the first freshman to lead the Illini in tackles since 2012.

In the past three weeks, Green and Nelson were responsible for 51 Illinois tackles, and the newfound safety duo is at the forefront of a common theme on the defense. Freshmen accounted for 34 percent of the tackles made against Minnesota, with seven different freshmen bringing a Gopher to the ground at least once.

Head Coach Lovie Smith has said the influx of young talent on the field isn’t a calculated play, but some have certainly earned their opportunities.

“We are playing a lot of freshmen,” Smith said. “Maybe not by choice for some of them because of injuries, but some of them have earned playing time. We’re not in ‘trying to play young guys’ mode or anything like that, but we’re still playing the guys that give us the best opportunity to win. Some freshmen we have have gotten that opportunity.”

Like Green and Nelson, players defensive linemen Jamal Milan, Kenyon Jackson and Dele Harding have received ample opportunities in recent weeks that they may not have expected when looking at the veteran players ahead of them on the depth chart.

Milan earned his first career start against Western Michigan, in which he broke out for seven tackles, two and a half tackles for loss and a sack. He has been an integral part of the D-line rotation since.

Jackson recorded his first career start versus Purdue and has recorded at least three tackles in each game since.

Harding is the latest to step up out of underclassman obscurity with a career-high three tackles and his first career tackle for loss against Minnesota.

“I don’t see a ton of the defense, but Stanley Green and Pat Nelson at safety are doing a great job,” sophomore Offensive Lineman Nick Allegretti said. “And Dele Harding, going against him in practice, he’s one of the most athletic kids I’ve had to block. That’s super promising for the future, so we’ve just got to keep building on those type of kids, get them more confidence, get them more reps and keep building.”

While practice provides Allegretti a first-hand taste of what the future may hold on defense, he’s also been blocking for a handful of freshmen and underclassmen.

Freshman Reggie Corbin is one of them and has been a main-stay in the backfield for the majority of the season. He led the way with 83 yards on the ground against Minnesota and loves to see fellow fresh faces hit the field.

“It’s good to see the people that we came in with and the younger class go out there and just play and leave it all out there,” Corbin said. “They’re playing hard, and I’m proud of them. I’m proud of our whole team.”

Even though Smith won’t commit to it, with just four games remaining, it could benefit the future of Illinois to dole out more playing time to young players.

“It’s great experience for all the young guys,” Green said. “After this year getting the experience, next year, we should really take the next step.”