Zach Grant made it to the top of the hill 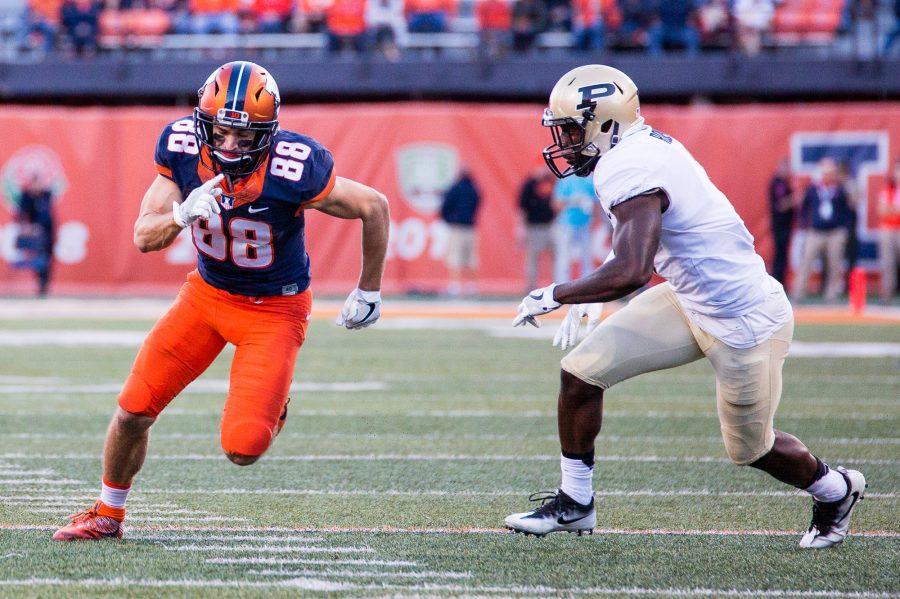 Illinois wide receiver Zach Grant (88) rushes off the line of scrimmage during the game against Purdue at Memorial Stadium on Saturday, October 8. The Illini lost 34-31.

When Zach Grant was a freshman wide receiver at St. Ambrose in Davenport, Iowa, in 2012, he’d wake up earlier than the rest of his teammates and go running.

Each day, he would climb his favorite spot: a huge hill on the edge of campus, with the Mississippi River at the bottom.

Four years later, he finally made it to the top of a different hill.

In the third quarter of Illinois football’s Homecoming game Saturday, Grant – now an Illini redshirt senior — broke from the line of scrimmage at the Minnesota 16-yard line. He got his defender on his right shoulder and made a beeline for the left sideline. When he reached the end zone, he turned over his left shoulder just in time to track the pass from Illini quarterback Jeff George Jr.

He made the catch, scoring the first touchdown of his career at Illinois.

“It is a special feeling,” Grant said. “I have been waiting for it for a long time. It has been a while since I have been in the end zone, so it was a special moment for myself and my family in the stands.”

Grant’s family watched the play from their seats on the opposite 15-yard line, 10 rows up behind the visitor’s bench.

The Grant’s never miss a game, often bringing eight to 12 people each time. So when Grant scored, it was clear what fans were sitting in that section.

“She was ecstatic, I’m sure everyone around knew that that was his mother,” Zach’s dad Scott Grant said. “Of course she was wearing his jersey and of course she jumped up and down. She is probably without a doubt, his biggest fan.”

It was the culmination of a long a road that began when Zach did not get much recruiting attention out of high school.

In high school, Grant was a star. He set the state record for receiving yards in a season (1,310) and recorded the second most receptions (131) in 2011. He helped Rochester High School to state championships in 2010 and 2011.

He always dreamed of playing Division I football, but he was seen as too small coming out of high school. He went to the NAIA St. Ambrose, with intentions to bolt to DI as soon as he could, knowing St. Ambrose was only at the bottom of the hill he needed to climb.

“He was always very self-motivated,” Scott said. “I mean he’s never stopped working. I mean he’s never been content where he’s at. He’s the kind of guy that will always put in the extra time and whatever needs to be done. I mean he lives, sleeps and breaths football.”

It only took Zach one semester at St. Ambrose to draw attention.

One of the first schools to give Zach an offer was Northern Illinois, and he quickly made a decision. He talked it over with his family, and they supported his choice, but his dad felt a little uneasy about his son making the decision so early.

Nevertheless, he spent his spring semester in DeKalb, Illinois, with the Huskies.

But one day that spring while walking out of a hardware store in Rochester, Scott got the news he, his son and the rest of their family had been hoping for.

Zach’s high school coach, Derek Leonard, called him, telling that Zach had shot the gun too early, and former Illinois head coach Tim Beckman wanted him to play at Illinois.

So Zach transferred again but this time to his dream school. After sitting out a season due to transfer rules, he joined the roster for the 2014 season. He could finally see top of the hill.

“I think he’ll be the first to tell you it was the best decision he had ever made, he loves the school, loves the University,” Scott said. “I don’t think there’s anything he regrets about going to Illinois.”

The next step for Zach was getting himself playing time after spending his first two seasons with the team waiting behind other wide receivers Geronimo Allison, Malik Turner and Mike Dudek.

Now, Grant has finally found his niche, competing with Turner and making each other better.

From Grant’s practice performances, freshman running back Reggie Corbin didn’t believe it was only his first career touchdown.

“I had no idea,” Corbin said. “You see Zach just ball in practice, and I know how good of a player he is so that is shocking.”

Zach’s dad knew that his son would have the opportunity to play more when he looked ahead to this season. That made him look forward to it enough, but then the Illini hired head coach Lovie Smith, and Scott got even more excited.

A later part of Zach’s climb, Smith still felt just as happy for Zach when he caught his touchdown pass.

“You don’t have to be around a long time to know that when you are winding down your career, you want to finish it a certain away,” Smith said. “We get the same type of effort from him all the time, and that is a winning effort.”

He finally made it to the top of the hill, and the view is pretty great.