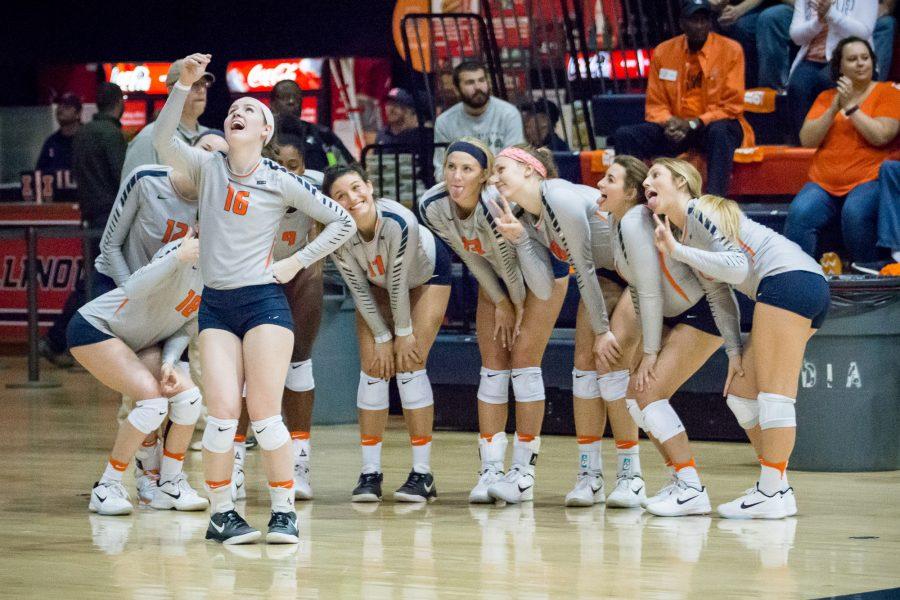 Illinois' McKenna Kelsay leads the bench in celebration by taking a selfie during the match against Northwestern at Huff Hall on Saturday, October 15. The Illini won 3-0.

Before every game, the Illinois volleyball team gathers around in a “hype” circle. All the players — except one — crouch down, link arms and sway from side to side, chanting “Ayeeee, ayeeee, ayeeee,” before finally coming together.

Senior McKenna Kelsay is the lone person in the middle. She screams and she dances. She’s done the routine dozens of times, yet in her last year, it still hasn’t gotten old. On her face lies an ever-present smile.

“I think if you let life get too serious, you’re not living right,” Kelsay said. “Sometimes situations can get tough, especially if we’re in a tight match. And I think being able to dance or being able to just be like, ‘Oh, we got this!’ and laughing and stuff like that, I think that can definitely help in those situations.”

The defensive specialist said she loves to sing, dance and play volleyball, and the three have intertwined this year.

The energy and positivity that the Wheaton, Illinois, native displays is something that has become familiar for head coach Kevin Hambly. But just one year ago, Kelsay wasn’t in the middle of the huddle. She couldn’t be seen dancing or smiling, and at one point she couldn’t even travel with the team.

During practice last season, Kelsay and another player tried to dig a ball, but instead of passing one another, they collided. Kelsay’s head slammed into her teammate’s shoulder and she suffered a concussion.

“Going through last year was hard because you were just waiting for her to get healthy,” Hambly said. “And so you weren’t sure if she was going to be fine and she just never ended up being that way. It was frustrating for her and it was hard.”

Several weeks passed before she was able to play again, but on her first day back, she was hit in the head with a ball and was concussed again. This time the injury kept her sidelined for the rest of the season.

The series of unfortunate events made Kelsay realize not to take any moment for granted.

“You never think that that’s going to happen and especially twice,” Kelsay said. “But again, I think it made me now see how great this (opportunity) is, you know?”

When she was younger, Illinois’ defensive specialist didn’t think she would be playing collegiate volleyball. Throughout middle school she played soccer, basketball and participated in four events for track and field.

In wasn’t until fifth grade that Kelsay picked up volleyball because her older sister Kristen, a former Michigan State setter, was playing.

Soon Kelsay fell in love with the game and by the time she arrived at St. Francis High School, she was a full-fledged volleyball player.

Throughout her four years, she guided the Spartans to an undefeated record in conference and during her senior season, Kelsay led St. Francis to a state championship. In her final year, Kelsay was named the team’s Most Valuable Player and Conference Player of the Year.

When it came down to choose what school she wanted to attend, Kelsay said it was between Michigan State and Illinois. Ultimately, the defensive specialist chose not to follow in the footsteps of her older sister, and instead committed to Hambly and the Illini.

“I kind of wanted to just make my own trail through college because I had followed my sister through high school and we had both been pretty successful,” Kelsay said. “Not that I wouldn’t have loved to play with her, but I also had to look at it like as it was only going to be one year.”

Kristen is now an assistant coach at Michigan State, and since McKenna chose to attend another Big Ten school, the two have squared off against each other every season for the past four years.

The Illini haven’t lost a match against the Spartans since McKenna’s freshman year and Kristen’s senior year — the last time the two faced each other on the court.

This Saturday, Illinois will head to East Lansing, Michigan, for what could be the last time the two sisters compete against each other on the collegiate level.

McKenna mentioned she has a younger sister, Nicolette, who is a freshman at Illinois, but since she doesn’t play volleyball, this weekend could mark the end of an era.

“My parents love it,” Kelsay said. “My dad makes this half-Michigan State, half-Illinois shirt that he wears. We’ve talked about this weekend being our last time playing each other and that’s kind of bittersweet. It’s sad, but it also been such a cool opportunity.”

Hambly won’t be saying any goodbyes to Kelsay this weekend, but that didn’t stop him from weighing in on what it will be like when it’s his last time coaching his often vibrant and easy-going senior.

“McKenna is terrible,” Hambly said with a smile. “But no, people are happy being around her. She’s got a crazy amount of energy and very rarely have I seen her discouraged about things. She’s a great teammate. I mean she’s awesome. I’m going to miss her when she’s gone, big time.”