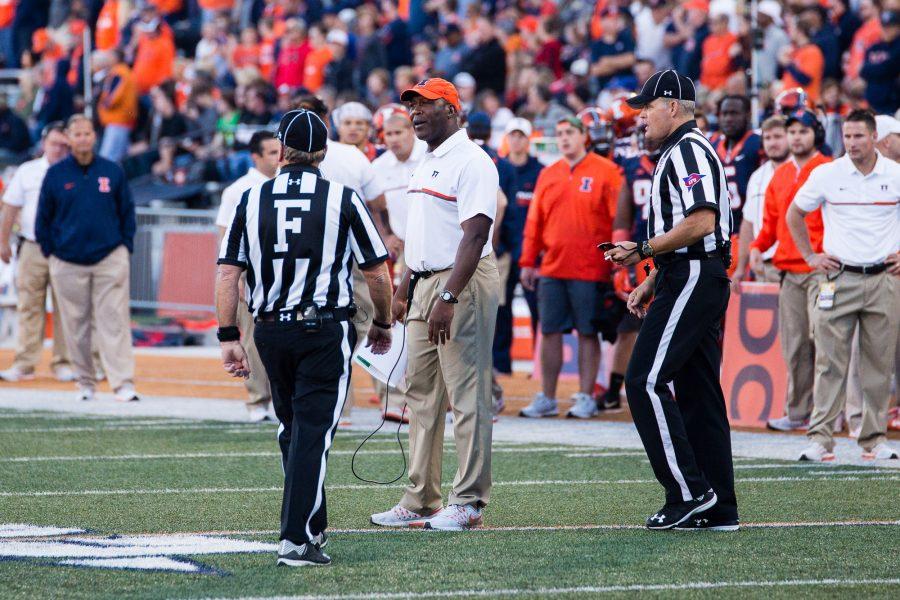 Illinois head coach Lovie Smith talks to the refs after a penalty during the game against Purdue at Memorial Stadium on October 8. The Illini lost 34-31.

It’s not November in college football without some rumors, and Illinois head football coach Lovie Smith spent his Monday press conference dispelling some.

ESPN’s Adam Rittenberg reported Sunday that Smith was “miserable” and might leave after only one season.

Because of course, there were rumors.

Illinois football hasn’t performed to the expectations of many fans that were expecting a complete overhaul in the course of one summer.

So Smith addressed the rumors when he was asked about it, saying he wasn’t happy with where the team is now, but that Illinois will win in the future.

He later sent out a tweet to affirm that he won’t be leaving.

Before he responded at his press conference, he said he didn’t even see the report. Needless to say this is one of the crucial preseasons and Smith is not a huge fan of the media.

He has brought his NFL experience to Champaign, including a media treatment that’s based on NFL style.

Smith doesn’t give injury reports and he once called out a reporter for questioning his job. He gives short answers and knows that he can.

It was not a surprise that rumors started circling. Discontented fans and even the media will say whatever gets views. And a former NFL coach leaving after one bad season definitely is a conversation piece.

However, it’s one that’s completely inaccurate. From the outset, people paying attention to Illinois football should have known that this was a team that needed more than one season with Smith to be different. It’s a program that will require a few years of growth and his own recruits.

This is not an ideal season, but fans shouldn’t expect anything of national championship caliber so quickly. It’s just not feasible given the program Smith inherited.

This weekend is another game that’s questionable for the Illini.

At the beginning of the season, it appeared that Michigan State would once again be a powerful force in the Big Ten. This weekend’s game would have been an automatic loss if things panned out as planned.

But the Spartans have not yet won a game in the conference. However, Michigan State kept the score close against its rival Michigan.

As Illinois fans have seen, past games mean nothing when it comes to actual matchups.

The quarterback decision is still up in the air for Smith. He’ll either go with starter Wes Lunt who got injured and hasn’t played since the Purdue game or third-string Jeff George Jr.

The receiving corp is even slimmer with added injuries last week.

And for a team as inconsistent as the Illini, it is important to be in a “this game” mentality only, even if fans and coaching personnel want to be thinking about the future.