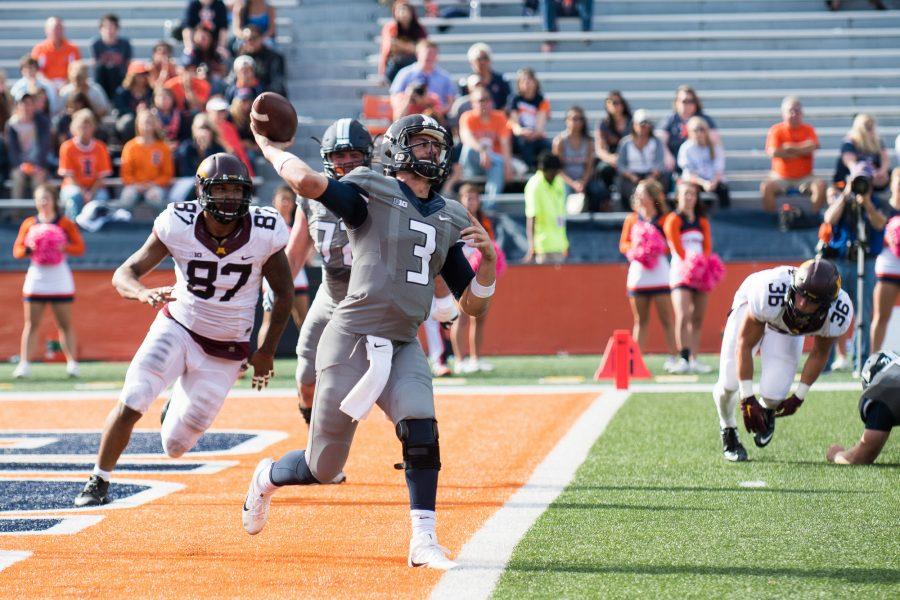 Illinois quarterback Jeff George Jr. throws a pass during the game against Minnesota at Memorial Stadium on Saturday October 29. The Illini lost 17-40.

After Illinois football lost to Minnesota last week, a reporter asked head coach Lovie Smith if he would try to be positive in the week leading up to the team’s next game.

Smith said he didn’t want to be positive.

And that mentality has rubbed off on his players.

“It is definitely disappointing,” running back Reggie Corbin said. “We feel like we should win every game. I have never really lost this much. It is new, but you never want to get used to it. You want to remember this feeling so you can get better.”

The Illini have not had time to sulk about their losses. This weekend’s opponent is in a similar situation.

Both Michigan State and Illinois had a lot of hype around them entering the season. The Illini weren’t expected to win the Big Ten by any means, but with Smith taking over the program, people expected the Illini to exceed previously low expectations.

Michigan State was different, though. The Spartans ranked No. 12 in the Associated Press preseason top 25. Since then, the Spartans are 2-6 and are 0-6 in their last six games. Michigan State and Rutgers are the only two teams left in the Big Ten without a conference win.

Smith said he has been surprised to see the Spartans slide down the standings, but he is preparing for their best this Saturday.

“We’re going on what we see right now,” Smith said. “I’d say they played their best game, probably, of the year this past weekend. We saw a physical football team and kind of lined up and went right at a good Michigan football team.”

Michigan State lost to rival Michigan last week. The Spartans were down by double digits for the majority of the game, but a late push made it a one-possession game in the fourth before Michigan eventually prevailed.

Smith is keeping the Michigan State defense in the dark on which Illinois quarterback they should be prepared to face.

Smith has been starting his third-string quarterback, Jeff George Jr., the past two weeks.

First-string Wes Lunt hasn’t been back on the field since he got hurt in the fifth week of the season against Purdue. Second-string quarterback Chayce Crouch had season-ending surgery two weeks ago.

The Illini offense will have to make even more adjustments this week, as their best wide receiver Malik Turner was injured last week.

The Illini also lost running back Ke’Shawn Vaughn to injury late in the game against Minnesota. Smith has not announced if Vaughn will play or not Saturday.

Vaughn also played under center in a wildcat scheme that Illinois had put in place once George started playing.

Corbin said that it will be a change not having Vaughn as an option if he doesn’t play, but Vaughn made sure to talk to him and fellow running back Kendrick Foster after he was injured.

“He went down, but we knew it was alright,” Corbin said. “He talked to us, and he said, ‘there is three of us for a reason, so you guys have to take over the load and keep going,’ and that is exactly what we did.”