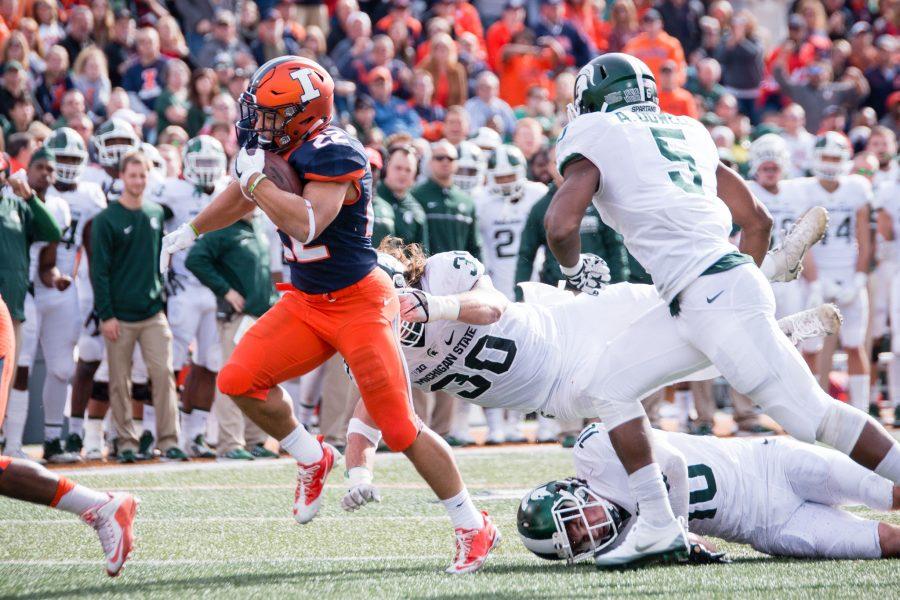 Illinois running back Kendrick Foster (22) runs through a pair of Michigan State defenders for a touchdown during the first half of game against Michigan State at Memorial Stadium on Saturday, November 5. The Illini lead 7-6 at halftime.

It came down to the wire, but Illinois football beat Michigan State by a score of 31-27.

With under three minutes remaining in the game, the Illini were down by three. They drove down the field, and Jeff George Jr. capped the game-winning drive with a 15 -ard touchdown pass to wide receiver Sam Mays.

It was the Illini’s first win in three weeks, and the first home win since the season opener about Murray State. Head coach Lovie Smith was happy to see his team in a celebrating mood again.

“There is no excitement like a winning locker room,” Smith said after the game. “Just genuine emotion. That is what it is like. You want the guys to feel like that more often.”

The Illini scored 24 of their 31 points in the second half. It took them a while to get going in the first half.

It took the Illini almost 28 minutes of game time to pick up a first down, but at one point in the first half, Foster put both teams on his back.

On Illinois’ final drive of the first half, Foster busted off a 15-yard touchdown to cap the drive. The five-foot-nine, 200 pound back carried three Spartans into the end zone with him.

While he literally had Spartans on his back, he figuratively had the Illini on his back.

And he wasn’t done yet.

In the second half, Foster busted off a 64-yard run to give the Illini the lead again. The junior tailback ran for 146 yards on 17 carries, and he scored two touchdowns for the Illini.

The depleted Illini offense needed a spark. They didn’t have Malik Turner this game after he was carted off the field last week. Turner had been the safety valve for the Illini quarterbacks all season, but wide receiver Sam Mays did what he could to step up in his absence.

“We have been asking (Mays) to play a different role,” Smith said. “For a receiver that has played in the past and hasn’t gotten too many reps this year, he has been ready throughout. When we changed up his role and it was time for him to step up to the plate, more often he did.”

In Jeff George Jr.’s third start in an Illini uniform, he connected with Mays four times for 39 yards. Mays made a big 15-yard catch on the sideline to keep the Illini’s first half scoring drive alive.

George threw for 130 yards and had 13 completions in the game for the Illini.

“Man, (George) did an awesome job,” Foster said. “We always talk about it and tell him ‘you’re great,’ and that he has it in his blood. Now he finally has a W under his belt, and that is a big confidence booster going into next weeks game.”

When the Illini offense couldn’t score, the defense was keeping the game close. Michigan State was only able to score on field goals until late in the third quarter.

It came down to the one play, where the defense stopped the Michigan State offense on fourth down, sealing the win for the Illini.