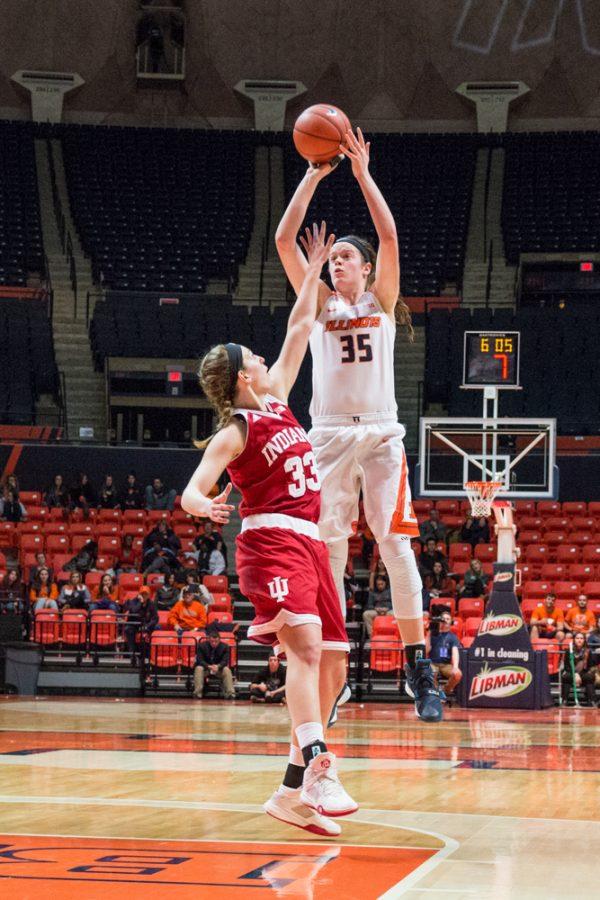 Illinois' Alex Wittinger shoots a jumper over Indiana's Amanda Cahill during the game against Indiana at the State Farm Center on February 10. The Illini lost 70-68.

Alex Wittinger finished with 15 points and 13 rebounds, along with two blocks and three steals.

A lot has changed since the Illinois women’s basketball team last played, and on Sunday, the team played its first exhibition game of the 2016-2017 season against Drury University.

The new-look Illini went back and forth against their Division II opponent all game long before squandering away a fourth quarter lead. The Panthers went on to win 66-60 behind 24 points and six three-pointers from senior Paige Wilson.

“They ran a couple of good sets early, and we got a little bit lost,” head coach Matt Bollant said. “I thought we played hard, but at times, we got lost in our rotations and didn’t do a good job of finding (Wilson). Her taking 11 threes is way too many threes, and most of them were pretty good looks.”

One year ago, center Chatrice White was the leading scorer and rebounder for the Illini, and although she was the marquee player on his squad last year, Bollant had a different former player cross his mind following the loss.

“I think especially we missed Kylee (Simmons’) poise today at the point and (her ability) to knock down big shots,” Bollant said. “Someone else is going to have to step up and be able to do that, and obviously we didn’t have that in the fourth. We have to find who’s going to step up and make shots when the game’s on the line.”

This year’s squad features six new players, including forward Ali Andrews and guard Brandi Beasley, who both started for the Illini.

On the first play of the game, Beasley drove the ball hard to the basket and layed it in. The Memphis-native had plenty of family and friends at the State Farm Center to cheer her on, and after scoring her first collegiate bucket, there was an uproar from her cheering section.

Beasley showed that she could handle the ball, often breaking Drury’s press by herself and displayed flashes of being a strong on-ball defender. In the third quarter, she stole the ball from Drury’s Heather Harman near half court and coasted in for the lay-up.

“I was kind of nervous to start off,” Beasley said. “But my teammates did a good job of making me feel comfortable. I think I did pretty good overall. I think we did decent as a team. I think this was a good loss for us to figure out the things we need to work on and get better on later in the season.”

The Illini held a seven-point lead heading into the fourth quarter but managed to only score six points in the game’s final quarter.

Sophomore forward Alex Wittinger, who recorded a double-double, took only two shot attempts in the fourth quarter and missed both. She shot 5-of-14 from the field overall for 15 points, fouling out with 1:29 remaining in the game.

“I’m trying not to dwell on (the missed shots) because if you dwell on it, you turn inward,” Wittinger said. “Our biggest thing we need to work on is our defense and just our talk with switching screens and knowing our scouting report. We know what we have to do. We just have to do it.”