Sam Mays the latest Illini to step up 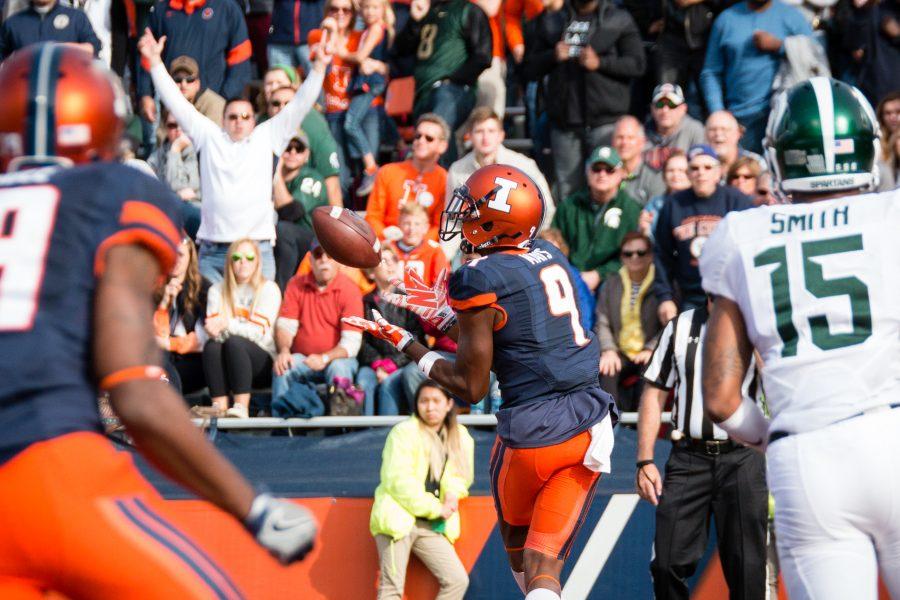 Illinois wide receiver Sam Mays (9) gets ready to catch a pass in the end zone during the game against Michigan State at Memorial Stadium on Saturday, November 5. The Illini won 31-27.

Although former Illini Geronimo Allison set himself apart as the leader of the Illinois receiving corps last season, some of his teammates still had trouble telling the 6-foot-3 pass-catcher apart from someone else.

“Last year during camp, we always had to see who it was and look closely,” said sophomore receiver Desmond Cain.

Another 6-foot-3, 200-pound receiver by the name of Sam Mays brought flashbacks of Allison’s playmaking abilities Saturday, and it wasn’t just because of the similar lanky frame and athletic prowess.

With just over a minute remaining in Saturday’s game against Michigan State and Illinois trailing by three, Mays hauled in the game-winning score on a 16-yard pass from redshirt freshman quarterback Jeff George Jr., reminding fans and players of Allison’s famous Nebraska catch from a year ago.

It was Mays’ fourth catch of the day and just the 16th of his young career.

“I definitely got mobbed,” Mays said. “Everyone was just congratulating me. These guys know how much potential and ability I have and they were just happy I got that moment. I was happy for myself as well.”

Even though Mays’ physical liking to Allison hasn’t matched the now-Packer’s production, the sophomore knew a more prominent role waited for him.

The Texas native was yards away when Malik Turner crumpled to ground after a hard hit to the helmet during last week’s loss to Minnesota, leaving a void in the receiving corp.

Mays was confident he could fill the playmaking void, though, and made sure his quarterback knew so.

George returned the same sentiment when the two hooked up for what turned out to be the game-winning score late in the 31-27 victory over the Spartans.

Mays has been waiting to seize a big moment for the past two seasons, and when that ball spiraled toward him in the end zone on Saturday he knew all his hard work would result in a celebration at the end of the game in the north end of Zuppke Field.

On the same drive, Mays forced a pass interference call that brought Illinois past midfield. He hauled in four passes for 39 yards, both team-highs and career-highs. The game-deciding score was the his first touchdown of the season and just the second in his career.

A certain behind-the-scenes chemistry had been building between Mays and George from their large amount of practice reps as backup players.

And when the time to show off their connection came, the result was the Illini’s third win of the season.

“Me being the third-string guy to start the year, and Sam not getting all the reps, we definitely had that chemistry going in practice,” George said. “It’s a cool thing to see when two guys working hard get their opportunity. I have all the confidence in Sam and I think he has all the confidence in me.”

Saturday was just the fourth game Mays participated in so far this season. He played in four games all of last season and never totaled more than two catches in a single game.

Head coach Lovie Smith has thrown a lot of inexperienced players on the field in the past few weeks and could tell Mays wouldn’t have trouble being the latest Illini to break out.

“For a receiver that’s played in the past and hasn’t gotten an awful lot of reps this year, he’s been ready throughout,” Smith said. “When we changed his role and it was time for him to step up to the plate, he did.”

The Illinois youth movement has firmly taken over the defense and Saturday marked its spread to the offense. Junior running back Kendrick Foster has become the elder statesman among the offense, and he called Saturday’s win a “springboard” for the future of the program.

When it came to trusting in guys like Mays, Foster didn’t need to think twice.

“I knew he was good since day one,” Foster said. “His frame’s great and his physical attributes are off the charts. I expected Sam to make a play and I’m so happy for him just to step up when he got the opportunity.”

For the second straight week, senior quarterback Wes Lunt dressed but did not see any action in place of George, and it’s unclear when Turner will return.

Now in what Smith has called the fourth quarter of the season, George and Mays could have ample opportunities to keep proving their chemistry.

“Me and Jeff have always been clicking, we’ve always had chemistry,” Mays said. “Not that I haven’t had it with anybody else, but when the opportunity presents itself, you’ve just got to make the most of it.”