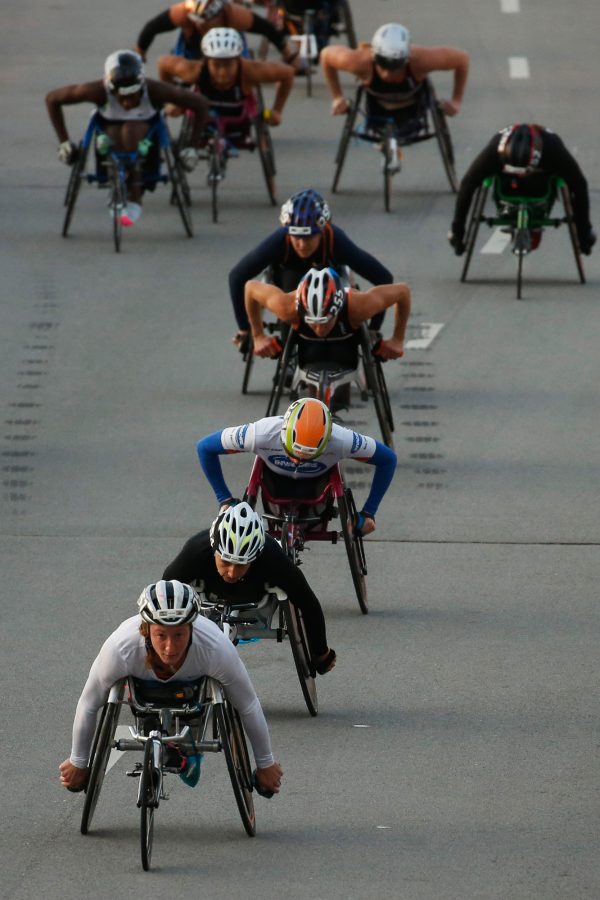 Women's wheelchair participant Tatyana McFadden (251) leads the women participants at the start of the race down down Columbus Drive in Chicago, Ill during the Bank of America Chicago Marathon on Sunday, Oct. 9, 2016.

A month and a half later, though, he returned to the facility and talked with the same employee. But this time, she looked at him completely differently, Bleankey said.

“From my personal experience, that was the toughest,” Bleakney said as his voice trailed off. “Learning to get around in a chair, opening a door, that was all easy to do and all the other different things you have to do when you’re paralyzed versus non-paralyzed. That type of perception of you coming from the other people was tough for a 19-year-old to swallow.”

Before going back to the facility for a second time, Bleakney had flipped off of his motorbike in Colorado, injuring his spinal cord. He spent the next month and a half at Craig Rehab in Denver and was released one day before getting his driver’s license checked.

“I think that at that point, because of the way she treated me in a wheelchair, there was such a significant contrast to the way she had interacted with me when I walked in,” he said.

Bleakney — a former wrestler at University of St. Thomas in Minnesota — was left searching for a way to utilize his passion for sports and his competitive edge. He was not familiar with Paralympic sports until after a group of Paralympic athletes visited Craig Rehab and ESPN aired a documentary about wheelchair racing.

“As I was adapting, I tried to find those anchor points,” he said. “As I did pre-spinal cord injury, for me, the one point that was a sense of normalcy was training.”

Bleakney would push his racing chair, swim and exercise outside of class. Less than a year later, he competed in the Chicago Marathon.

Even though sports gave him self-confidence, that didn’t mean the end of stigmas.

“That devalues the person, and the fact is that disability is a normal part of human existence,” Bleakney said. “There are a lot of people with disabilities on this planet, so it’s not that much of an anomaly.”

The World Bank estimates around one billion people in the world have impairments, and the United Nations estimates 80 percent of those individuals live in developing countries, where some are treated differently and not as full citizens.

The inequality also carries over into sports.

Paralympic gold medalists are awarded less than a third in cash prizes from the United States Olympic Committee, according to The New York Times. The winners of the New York Marathon wheelchair division earned $15,000, compared with $100,000 for their able-bodied counterparts.

Paralympian standout and Illinois alumnus Tatyana McFadden critized this inequity in the same article. She is working to bridge the gap between those with impairments and those without.

“For her, there’s a greater meaning to her success, and I think our program too,” Bleakney said. “That’s been the philosophy long before I arrived on campus, and that was that sport was an opportunity for outreach and empowerment.”

McFadden was born with spina bifida in a Russian orphanage.

Her doctors, acknowledging her declining health, were unsure how long she would live, but McFadden’s parents — Debbie McFadden and Bridget O’Shaughnessy — encouraged their daughter to join sports to build her strength. She competed in wheelchair basketball, swimming, ice hockey, scuba and wheelchair racing, which was her favorite because of its speed.

After filing and winning a lawsuit, Tatyana competed alongside her able-bodied peers at Atholton High School in Columbia, Maryland.

Since then, Tatyana has competed in five Paralympics and won 17 Paralympic medals. She even won a silver medal in a cross-country para-skiing event at the Sochi 2014 Paralympic Games.

She has also completed the Grand Slam of marathons by winning the Boston, New York, London and Chicago in each of the last four years.

But she has also worked to serve as a role model for children.

Tatyana donated two racing chairs to teenagers in collaboration with the New York Road Runners and her foundation, the Tatyana McFadden Foundation. On Sept. 22, she taught children who were able-bodied and had impairments in Maryland how to use a racing wheelchair.

“I’ve definitely seen athletes who have paved the way,” Tatyana, who serves on the Board of Directors for the Spina Bifida Illinois, said. “We need future athletes who have done the same … make this movement (of educating youth) happen.”

Bleakney echoed Tatyana and said there is an even broader benefit to para-sports.

“I think sport and disability sport directly attack the stigma associated with a disability, which is you are somehow weaker or unable, less than or inferior to your able-bodied peers,” he said.

Wheelchair racing, specifically, he said, is a confidence booster for the competitors.

“When you get into racing and you’re moving at 10-12 mph faster than peers running, they can recognize this is… a show of strength and athleticism,” Bleakney said. “That’s a really powerful aspect of sport.”

The world has become more aware of Tatyana’s stardom and para-sports as a whole. NBC broadcast a record 66 hours of the Rio 2016 Paralympics — nearly six more hours than its coverage of the London 2012 Paralympics.

Illinois women’s wheelchair basketball coach Stephanie Wheeler participated in four-straight Paralympics. She said her family couldn’t watch the Athens 2004 and Beijing 2008 Games on the Internet or TV, but they were able to watch her most recent gold medal win at Rio 2016.

“When you look at it from purely a sociological perspective, when you see our athletes compete at a high level, I think it changes the way that you look at the general public of people who have disabilities,” Wheeler said.

The popularity of the Paralympics as a whole has grown over the years with 375 individuals competing in the 1963 Paralympics, compared with 4,350 para-athletes expected at the Tokyo 2020 Games.

Although he said there is still room for improvement, Bleakney said he has noticed an increase in the awareness and popularity of para-sports.

“I don’t stigmatize the disability,” he said. “I see it as part of my identity, and I value that and the experiences I’ve had because of a disability. I’ll say that to people, and they’ll say, ‘Well, if somebody gave you a pill and it would regenerate your spinal chord you wouldn’t take it?’ Of course I would take it, right? But that wouldn’t necessarily divorce me from all the wonderful experiences I’ve had.”

In the article titled, “Sporting goals beyond sports,” it said Adam Bleakney was a former wrestler at Northern Iowa Community College. He wrestled at University of St. Thomas in Minnesota. His first Paralympics was in Sydney, not Atlanta. Tatyana McFadden has won 17 Paralympic medals, not 16, and the Sochi Paralympics was in 2014, not 2008. The Daily Illini regrets these errors.