Illini of the Week: Kendrick Foster 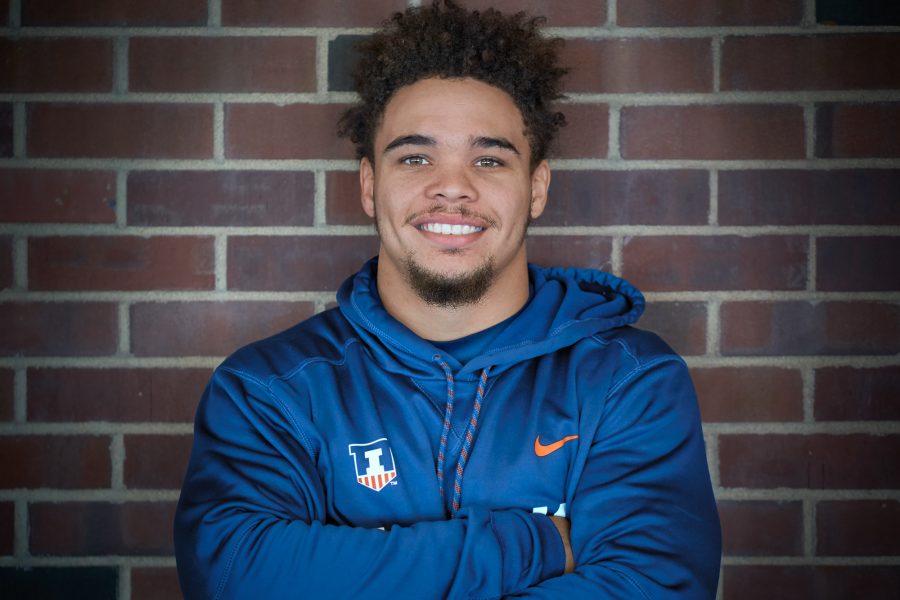 With 19 seconds remaining and the game on the line against Michigan State, Kendrick Foster had a simple question for an Illinois defense preparing to stifle a fourth-down attempt in its own red zone.

“How do you want be remembered?” the junior running back shouted into the huddle.

Foster didn’t take the field for the game’s deciding play, but his message did.

“That energy just translates into everything you’re doing,” sophomore linebacker Tré Watson said. “(Foster) did what he needed to on offense, and we felt like, ‘Alright, he did his job, now it’s time to do ours one last time.’ It definitely helped give us a boost before we went out there for that last play.”

Ultimately, the defense was the deciding factor in Saturday’s 31-27 victory, but Foster made sure the Illini even got that far in the first place. The Peoria native rushed for a career-high 146 yards and found the end zone twice. He’s now second in the Big Ten in yards per carry, fifth in all-purpose yards per game and sixth in rushing touchdowns.

Prior to the season, Foster had 15 career carries under his belt and was projected to be the Illini’s third-string back. Now, he’s the team leader in total offensive touches, yards and scores.

As a constant positive presence throughout the up and downs of the season, Foster has become a team leader off the field as well.

“People follow guys like that,” head coach Lovie Smith said. “They listen to guys like that. They watch very closely, and what you see from him is a never-stop effort. As a coach, the guys that are doing it the right way, you want them to be the voice that people are hearing.”

At 5-foot-9, Foster is usually the smallest player on the field at any given moment, and he’s lovingly reminded of it often, especially by offensive coordinator Garrick McGee.

“He’s always giving me crap about being short,” Foster said with a laugh.

But what he doesn’t have in height, Foster makes up for with his voice, and other team leaders are taking notice — even on the other side of the ball.

“Kendrick has been a guy for us who’s been consistent and is an emotional player and puts it all out there for us,” senior linebacker Hardy Nickerson said. “Any time you see a guy like that playing every down the way he does, guys feed off of it.”

Although this is his first season as a full-time player, Foster has become the offense’s elder statesman in recent weeks. Upperclassmen like Wes Lunt and Malik Turner have gone down with injuries, opening the door for younger offensive weapons to emerge.

Perhaps stepping into the brightest spotlight has been sophomore quarterback Jeff George Jr., who notched his first career victory as a starter on Saturday. George — or JG3, as the pendant hanging from his glossy gold chain reads — said he’s been gaining more and more confidence with every snap.

“We do so much together, being roommates,” George said. “Seeing it all pay off, and that camaraderie that we have off the field — to see it transfer onto the field is something special. Knowing that’s my roommate when I see him succeed, it’s almost like I’m right there with him.”

It was a celebratory Saturday night in the Foster-George household, which also includes sophomore defensive back Chris James and Watson, who won Big Ten Defensive Player of the Week honors after his 16-tackles performance Saturday. Watson and George have roomed together for the past two years, and Foster joined the fold at the beginning of this academic year.

As Illinois’ unexpected backfield duo, a special bond has blossomed between George and Foster. Whether they’re kicking back around the house, grabbing a bite at Red Lobster every Thursday night or catching a movie to take their minds off football, the two have become almost inseparable off the field.

And now that one of them is handing the ball off to the other, that connection is being showcased on the field, too.

“It’s awesome,” Foster said. “We’re making memories that we can tell our children and grandchildren about.”

Foster will be one of the few seniors playing offense for Illinois next season, and as his career winds down, he’ll be answering the same question he posed to the defense on Saturday.

It’s pretty clear how Foster wants be remembered, though.

“I’m just trying to be that spark plug and momentum-shifter in the game,” Foster said. “Don’t let the stature fool you. I’m about business.”